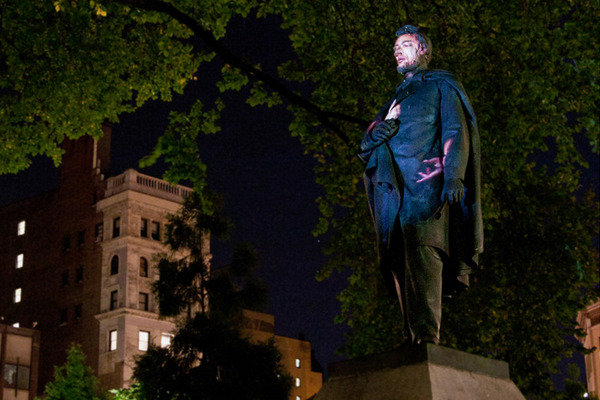 Galerie Lelong and More Art are pleased to announce a major new public art installation by Krzysztof Wodiczko: Abraham Lincoln: War Veteran Projection. Beginning November 8th at dusk, voices and gestures of Iraq, Afghanistan, and Vietnam war veterans will animate the bronze commemorative statue of Abraham Lincoln that has stood silently in the northernmost part of Union Square since 1870. For one month, the memories and feelings of American soldiers will be spoken through the Lincoln monument as part of an outdoor public art installation by Krzysztof Wodiczko, an artist renowned for his large-scale light projections on architectural facades and monuments.

Abraham Lincoln: War Veteran Projection marks a return of sorts to Union Square for the artist, who in 1986 developed Homeless Projection: A Proposal for Union Square, a project that was tested in Union Square and presented in a gallery space. The proposal projected still images of objects associated with homelessness onto the four monumental sculptures in Union Square, addressing the effects of real estate development on the once derelict area in the 1980s. In the new work, veterans will animate the statue of Abraham Lincoln with motion and sound in the now commercially-thriving and historically civic center of Union Square.

“As our troops withdraw from Afghanistan, this commemorative statue, commissioned just a few years after the Civil War, again becomes a place for dialogue about war,” says Micaela Martegani, founding director of More Art. More Art, an eight-year-old organization devoted to bringing new and innovative works of art into public spaces in New York City, is the organizer of Abraham Lincoln: War Veteran Projection.

For the project, Wodiczko is interviewing approximately thirty veterans and their family members over the course of several months, taping conversations about their war experiences and the toll of duty on their family life. It will be these points of view, presented in each person’s own words, voice, and gestures, that will be projected via sound and light onto the figure of Lincoln. "Although these testimonies defy easy characterization, Wodiczko sees the parallels between the experiences of often estranged, neglected and traumatized US war veterans today and of those who survived the carnage of the Civil War, and the project draws a bold connection to Lincoln who, as president, reluctantly presided over the nation’s bloodiest conflict, and who, as captain, (though not serving in combat) witnessed atrocities during the Black Hawk War. This striking work of contemporary art is certain to be a ‘happening,’ and will reinvigorate interest and give new meaning to this historical civic monument, causing New Yorkers to stop and reflect on our history and its consequences,” concludes Martegani.

Wodiczko is most known for his public projections, a form of art-making he pioneered in order to give voice to such marginalized people as the homeless, immigrants, survivors of domestic violence, and war veterans. Over the past four decades, he has realized more than 80 large-scale art installations around the world, from Austria, Holland, Germany and Poland to Israel, Japan, Australia, and Mexico. Wodiczko has received several awards, including the Skowhegan Medal for Sculpture, College Art Association’s Award for Distinguished Body of Work, the Hiroshima Art Prize, and an award from the International Art Critics Association (AICA-USA). Wodiczko was born in 1943 in Warsaw and currently lives and works in New York and Cambridge, Massachusetts, where he is currently the Professor in Residence of Art, Design and the Public Domain at Harvard University’s Graduate School of Design.

Union Square has been the site of some of the largest activist gatherings in American history since 1861, during the Civil War when hundreds of thousands descended on the square to show support for the Union cause, as part of a war that would end up taking the lives of over a half million Americans. More recently Union Square was the gathering place for peaceful protests against the 2003 Iraq War, as well as a place of healing after the 9/11 attacks in New York City. For more information on Union Square, visit unionsquarenyc.org.

Funding for this project has been provided in part by the Lower Manhattan Cultural Council, New York City Department of Cultural Affairs, The NYC Council, the Polish Cultural Institute, Galerie Lelong, and individual donors. The project was made possible by the special assistance of the City of New York Department of Parks & Recreation and the MFA Photography, Video and Related Media Department at the School of Visual Arts.