In the group exhibition, artistic positions mix - as a consequence of applying the queer critique to the representation of stable, representable identities - with those positions which use uncertainty tactics, to abstract attributive and body images. The title is a reverence to the almost eponymous film by Rosa von Praunheim. 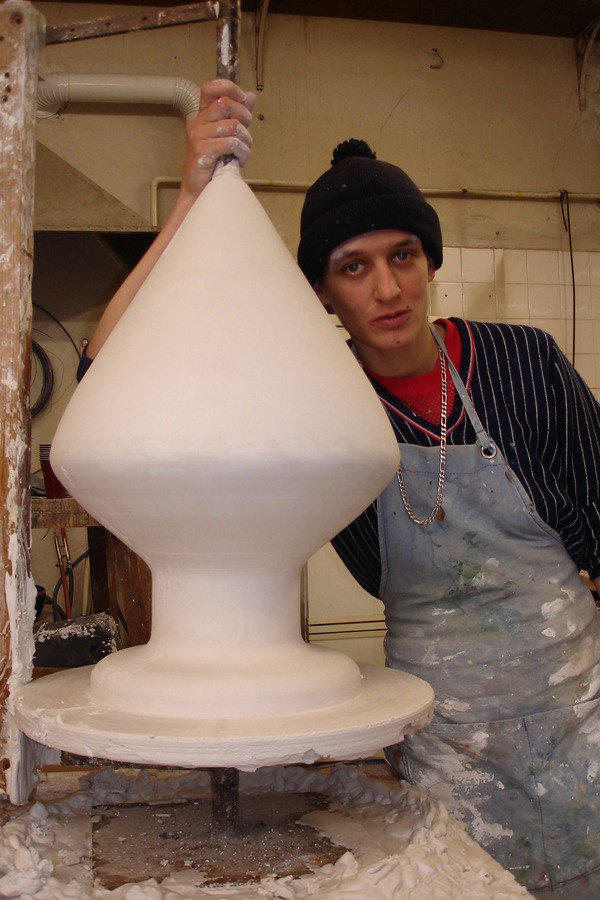 The title of the exhibition is a reverence to the almost eponymous fi lm
title Rosa Arbeiter auf goldener Straße, Teil II (1969) by Rosa von Praunheim. In this early short fi lm, Praunheim's protagonist
(played by Carla Aulaulu) escapes from political arrest in the former German Democratic Republic and takes cover in the bourgeoisbohemian art milieu of West Berlin. Having arrived there, she marries an actor, who joins up with the gay revolution at its end; he then perishes. Only eleven minutes long, the flamboyant film presents a prime example of the ambivalent direction of gender roles and sexualities and from today's perspective, it can be read as queer.

After the AIDS crisis influenced an activism charged with identity politics in the Act Up movement of the late 1980s and 1990s and after queer theory dominated 2000s, the term queer has long ceased to describe only a movement and theory, not to mention a subculture, but has rather arrived as a lifestyle (clubs, fashion blogs, TV-series) and is omnipresent in culture. What it exactly means often remains unspecific, due to the term's immanent complexity and contradiction, and depends on the user and the respective context. In the fi ne arts, a resurgence of interest can be observed in an abstracted presentation of forms of sexuality beyond homoand heterosexual norms.

Drawing on Judith Halberstam's definition of queer ("queer refers to nonnormative logics and organizations of community, sexual identity, embodiment, and activity in space and time"), we would also like to explore her concept of "queer abstraction". A satisfactory explanation of this concept is still lacking. The derivations, omissions, and exclusions - abstractions - of common body images and discourses is what we want to bring to light as the concept of "queer abstraction," and to discuss the term's relevance.

In Rosa Arbeit auf goldener Straße, artistic positions mix - as a consequence of applying the queer critique to the representation of stable, representable identities (Justine Frank, Roee Rosen, Pauline Boudry/Renate Lorenz, Stefan Hayn, Katarzyna Kozyra, Mateusz Lesman, Vaginal Davis/Damiana Garcia) - with those positions which use uncertainty tactics, to abstract attributive and body images (Kaucyila Brooke, Nilbar Güres, Viktoria Tremmel). Also formal parameters such as choice of materials and technique (Katrina Daschner, Julian Göthe, Ulrike Müller, Toni Schmale, Stefanie Seibold, David Zeller) come increasingly into the foreground. This happens in the awareness of the feminist roots of queer and the emancipatory potential that it includes. In working out this thematic field, also geo- and socio-political differences become clear, which are not separable into a simple East/West dichotomy, but rather remain disparate, even at an inner-state level. While it is true, for example, that in a modern city such as Tel Aviv a sociopolitical framework also exists for a publically visible life beyond the heterosexual norm, the situation in a conservative, ultrareligious city such as Jerusalem is quite different.

Also within Austria, a comparison of the provinces of Vienna and Vorarlberg, for example, cannot be made, due not least to different legal states. A central aspect of Rosa Arbeit auf goldener Straße comprises the artistic forms of thought and presentation, which put forth a shift in view or even a historical relocation and re-assessment (Anna Daucikova, Karol Radziszewski, Justine Frank, Roee Rosen, Tejal Shah). Artists from post-socialist countries show an image of a "queer East" not commonly seen: still today, the idea persists that these countries have little visibly queer art production, or only one that creates a scandal in the public view. Such works are positioned in constant dialogue with other contributions and in their interplay celebrate sexual
pluralism in very different manifestations.

They occupy in a temporary sense the spaces beyond sexual, religious, social, cultural, and political dogma; the arrangement of what is available is expanded in content and form. With the installation by Hans Scheirl, realized explicitly for the exhibition, we celebrate this genre-transgressing work, the "transgender-cyberlesbian-horror-comix"

Dandy Dust (1998) as the central film of "queer cinema," which still stands alone in this field. The installation, centrally positioned, was created in direct reference to the film, with the integration of parts of the storyboard and original props. Dandy Dust leaves simplistic dichotomies - man/woman, heterosexual/homosexual, inside/outside, micro/macro - far behind and presents a richly filled panorama of fluid role patterns and visual forms of expression.