This group show aims to re-energize public debate about what school ought to be. It is a collaborative project between Tone Hansen, Director of Henie Onstad Kunstsenter, and artist and researcher Ane Hjort Guttu. 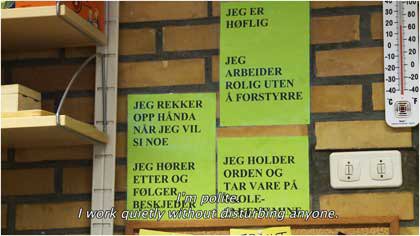 Learning for Life aims to re-energize public debate about what school ought to be. It is a collaborative project between Tone Hansen, Director of Henie Onstad Kunstsenter, and artist and researcher Ane Hjort Guttu. Taking its title from the Swedish TV series by Carin Mannheimer of 1977, the project which looks back to ideological discussions that took place in the late sixties and seventies and the principles of education formed at the time, comparing these to dominant current debates on education.

The curators contention is that the primary school system remains one of society’s most hotly contested ideological battlegrounds. But today there is remarkably little public discussion about educational methods and about the basic purpose of schooling. Instead the media focus has turned to national and international assessments of students’ level of knowledge. When schools are criticized, it is for poor discipline, low levels of achievement relative to specific European standards, or the proportion of foreign language speakers in classes.

Learning for Life will ask fundamental questions about notions of universal education, especially in the Scandinavian welfare state model. What has happened to this model since it was introduced after World War II? Has it worked as intended? What kind of citizens has it created, and what kind of education does it represent? How is it changing, and how is it debated today?

The project is part of the large scale European project Europe to the Power of n, organized by Barbara Steiner, The Goethe Institute, Munich, and is supported by the EU cultural program. Learning for Live will tour to Tensta Kunsthall, Stockholm and other institutions afterwards.