A group show by Preteen Gallery. The importance of transcendental derivation must make its necessity felt before letting itself be obliterated. The hypothesis of existence must comply with both that necessity and that obliteration... 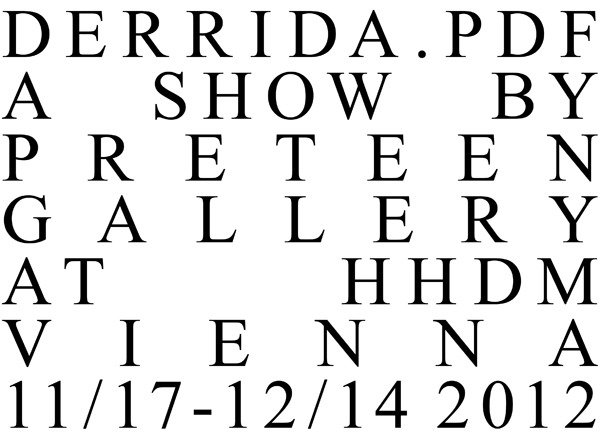 Speech and Phenobarbital
Representation is the primal movement of what consciousness presents as actuality. The mind, as an apparatus for the dissemination and expansion of the organism, exerts its highest power in the suppression of fantasy. A nerve stimulus is first transliterated into appearance; the image is persistently derivative of noise. Each time the perpetrator of speech leaps completely out of one region right into the core of an entirely different one, the undifferentiated and recurring translocalization of representation is delineated. This delineation of representation appears to be the ascertaining of an identity between unrelated affects.

A Freudian Lisp
As for a theory of experience, it is most unwieldy here. Like all theories articulated, it belongs to the narration of metaphysics and we can only use it under erasure. Experience has always designated the correlation with an absence, whether that correlation had the form of consciousness or not. Yet, we must, by means of the sort of contortion and contention that discourse is supposed to undergo, deplete the resources of the hypothesis of experience before attaining and in order to attain, by disappearance, its ultimate substance. Now, if the subject is thus put in question, it is certain that all echoes and calculations disturbing the very actuality of the speaking subject proceed to disentangle the obscurity of the problem of its inevitable fate: its cessation, its deletion.

Rousseau's Drag Race
As a passage toward this deletion, we must invoke the truth of Orgasm. The differentiation of a concept of Orgasm has already slipped away from that pre-comprehended datum of Thanatos. Yet it is crucial to utter the word, to invoke the truth, since language cannot do more: a solicitous glimpse ahead into this realm of orgasmic truth can only be written as the drawing of these crossed lines, at first only wards off especially the habit of conceiving orgasmic truth as something standing by itself. And as we will see, this double possibility is not alien to an institution, to what is called the analytic situation as a rape scene behind closed doors.

The Gay Science (The Sad Art)
The history of metaphysics is simply the history of infinite metaphors and metonymies. Its matrix is the determination of actuality as absence in all the senses of the word. The importance of transcendental derivation must make its necessity felt before letting itself be obliterated. The hypothesis of existence must comply with both that necessity and that obliteration. Writing is not only the disappearance of derivation, it means that the derivation did not even disappear, that it was never constituted except reciprocally by a non-origin: writing, which thus becomes the derivation of the derivation.

Gerardo Contreras is an architect and independent curator based in Mexico City. In 2008, he founded PRETEEN GALLERY, an experimental curatorial project that began in Hermosillo, Sonora, Mexico and relocated to Mexico City in 2011. Since 2008, Contreras has organized more than 33 exhibitions, including both established and emerging international artists.