Objects in Mirror are Closer than they Appear. An exhibition devoted to film and video organised with Contemporary Image Collective Cairo. It explores the moving image's complex and multilayered relationship with narrative and perception in the work of seven international artists. 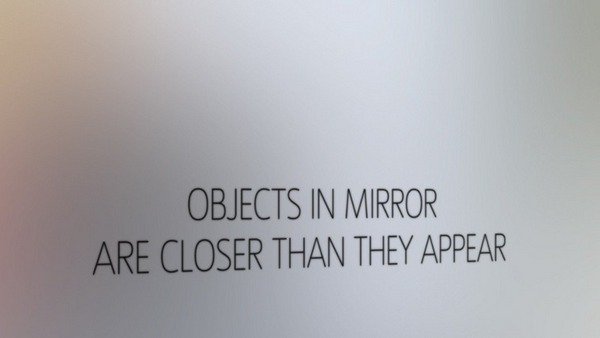 The exhibition will explore the difference between the moving images we are shown and what they represent to us as viewers. This tension has preoccupied many contemporary artists in a generation immersed in the flow of images from cinema screens, televisions sets, computers and smartphones. Their work recognises the multiple interpretations and doubt inherent in film, blurring the border between depiction and deception and investigating the limitations of the medium as it struggles to embody reality.

The works on display will include Manon de Boer’s film Dissonant 2010, which depicts a woman listening to a melody and performing an accompanying dance once the music has finished. The work explores the materiality of film, playing on audience memory and how senses – in this case sound and vision – supplement each other. It will also present Herman Asselbergh’s recent film Speech Act 2011, which charts the offences he believes mainstream cinema and homogenised pop culture have committed in relation to the avant-garde film tradition.

Works by Ján Mančuška include the short video Double 2009 in which the border between act and its re-enactment becomes confusingly blurred, whilst Patricia Esquivias’ enquiry into the process of mythologizing and storytelling, Folklore II 2008, juxtaposes biographical facts from the lives of two Spanish ‘icons’, King Philippe II and celebrity pop singer Julio Iglesias. Based on an obscure online conspiracy theory, Lars Laumann’s visual essay Morrissey Foretelling the Death of Diana 2006 delves into a frenetic decoding of Morrissey and The Smiths’ 1986 album The Queen is Dead alongside a montage of films clips and pop culture references.

The exhibition also includes Sherif El-Azma’s video installation Powerchord Skateboard 2006 which uses sequences of images and TV aesthetics to explore the relationship between personal and collective memory. Maha Maamoun’s Night Visitor: the Night of Counting the Years 2011 is comprised of found YouTube footage relating to the storming of the State Security headquarters in the aftermath of the Egyptian revolution, whilst another work by Maha Maamoun 2026 2010 references Chris Marker’s iconic film La Jetée 1962.

The exhibition is curated by Kasia Redzisz, Tate Modern and Aleya Hamza, an independent curator based in Cairo. It is a collaboration between Tate Modern and Contemporary Image Collective Cairo. The Project Space series has been made possible with the generous support of Catherine Petitgas. The curatorial exchange is supported by DCMS World Collections Programme with the collaboration of Gasworks.

Project Space at Tate Modern (formerly the Level 2 gallery) is dedicated to presenting contemporary art through a series of collaborations with cultural organisations around the world. The programme brings together emerging curators from both Tate Modern and other international venues for contemporary art to work together on an exhibition for both locations. Based on curatorial exchange and dialogue, the series showcases the work of new, recently established or rediscovered international artists. The exhibitions therefore open up the possibility of introducing new work and interpretations within differing global contexts. The curatorial exchanges are organised in collaboration with Gasworks.

This series of discursive exhibitions began in 2011 and, to date, has included collaborations with institutions in Amman, Lagos, Istanbul, Mexico City, Warsaw and Cairo. Forthcoming exhibitions are being developed with partners in Lima and New Delhi. The Project Space series aims to explore the most challenging art of today as well as the complexities of operating within a global context for contemporary art.

Herman Asselberghs (b. 1962, Mechelen, Belgium) lives and works in Brussels. His work has been shown at venues including the Centre Pompidou, Documenta X, Witte de With, M HKA, Van Abbemuseum, International Film Festival Rotterdam, Internationale Filmfestspiele Berlin and FID Marseille. In 2007 he won the Transmediale Award.

Sherif el-Azma (b. 1975, Manchester, UK) lives and works in Cairo. Azma has authored performance lectures, sound installations and live visuals for the 100Live electronic music festival in Cairo. His films have been featured in Manifesta, Home Works Forum and the Sharjah and Venice Biennials.

Patricia Esquivias (b. 1979, Caracas, Venezuela) lives and works between Guadalajara, New York, and Madrid. Her work has been shown at the Kunstverein Frankfurt and 5th Berlin Biennial and solo exhibitions have included those at Midway Contemporary Art, Minneapolis; White Columns, New York and Murray Guy, New York.

Lars Laumann (b. 1975, Brønnøysund, Norway). Solo exhibitions of his work have been held at Gallery West, The Hague; Kunsthalle Winterthur and Maureen Paley, London. His work has also been shown at Kunsthall Oslo; New Museum, New York; Jeu de Paume, Paris and the Liverpool Biennial.

Maha Maamoun (b. 1972, California, USA) lives and works in Cairo, Egypt. Recent exhibitions include those at Steirischer Herbst; La Galerie – Contemporary Art Centre, Noisy-le-Sec; Witte de With, Rotterdam and MoMA, New York. Maamoun is a founding board member of the Contemporary Image Collective (CiC), a space for Arts and Culture in Cairo.