Baby, I lost My Handshoes...

Baby, I lost My Handshoes... is a group show that it combines installation, moving image, text, and sculpture. All artist interpret the impact of form and style through playful narratives of architecture, fashion and language. The exhibition opens with 'Untitlted', a performance of Donna Huanca. 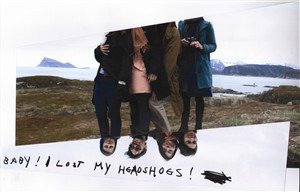 The exhibition Baby, I lost My Handshoes... will be presented in its third installment by Kunsthalle Exnergasse. The artists Donna Huanca (USA), Vytautas Jurevicius (LIT), Lisa Meixner (DE) and Aki Nagasaka (JAP) have collaborated since 2010 on the self-curated exhibition project Baby, I lost my handshoes.... The exhibition was first presented in May 2011 at Gallery Kurant in Tromso, Norway, followed by the second installation at Forum da Maia, in Porto, Portugal in June 2012.

Baby, I lost My Handshoes... opens on November 14th, 2012 with a performance of Donna Huanca. During Vienna Art Week there follow three programmes with feature international guests, a performance by Vytautas Jurevicius and an Artist Talk/Curator’s tour. Guest include Gerardo Contreras (MEX), Victor Boullet (GB), Nikolaus Feinig (A) Kyongfa Che (KOR/JAP), and Hermann Nitsch (A). On the occasion of this exhibition, gelitin (A) has designed the exhibition poster.

With shared interest in the expression of social and cultural life, Donna Huanca, Vytautas Jurevicius, Lisa Meixner and Aki Nagasaka interpret the impact of form and style through playful narratives of architecture, fashion and language. Their works make imaginative and stylised use of documentary, advertising, scientific inquiry and ethnographic field work, and, much like the curiously named Handshoes of the exhibitions title, their combination of works evidences a radial creative/thought process, seemingly free from the rigid critical or ethical interpretations. Correspondingly, Baby, I lost my Handshoes... has been curated without following one specific curatorial position or theme, but rather experimenting with an open interaction of various ideas, formats and narrations.

The group show combines installation, moving image, text, and sculpture and will host an array of accompanying events in the 400 square meter exhibition space at Kunsthalle Exnergasse. Film screenings, lectures, performances and discussions with featured guests Gerardo Contreras, Victor Boullet, Hermann Nitsch, Kyongfa Che and Nikolaus Feinig will push the boundaries of the main exhibition and create a dynamic artistic dialogue during Baby, I Lost My Handshoes… at KEX.

Donna Huanca, born 1980 in Chicago, USA. Lives and works Nomadically.
Huanca studied at Städelschule Frankfurt with Tobias Rehberger, participated in Skowhegan School of Painting and Sculpture, and holds a Bachelor of Fine Arts from the University of Houston.
Recently, she is a recipient of 2012 Fulbright Scholarship for research in Mexico City and has had solo exhibitions at Bard CCS, Annadale on- Hudson, New York, PRETEEN Gallery, Mexico City and participated in group shows at Forum da Maia, Porto, Portugal, and EXILE, Berlin, Germany.
Donna Huanca’s artistic practice investigates aesthetic rituals, arrangements and displays to construct hyper-real narratives. Her installations, sculptures and collages compose multiple simulacrums with discarded materials; such as, clothing, shoes, and ephemera. Although embodied in a wide variety of media, her work expresses a thorough engagement with linguistic experimentation. While delving into one of the most primordial and complex systems of communication, that of clothing, Huanca conveys distinctive and precise observations on the function of the garment, as an ever evolving manner of language production and a traditional form of cultural transmission. The results are performative platforms that are a product of a compulsive attitude towards the search for material beacons and parallel experiences.
At Kunsthalle Exnergasse Donna Huanca will present a new performance ‘UNTITLED (DMT)’, 2012 that will activate a Installation on view throughout the exhibition.

Vytautas Jurevicius, born 1981 in Lithuania, lives and works in Frankfurt am Main. He studies at Städelschule Frankfurt with Simon Starling and studied at the Academy of Fine Arts, Karlsruhe with John Bock. Among other projects he founded the performance group „Universal Cosmopolitan Research Project“.
2006 NRW project „to the middle“ City Krefeld, 2009 curating and taking part of group exhibition „Things to come“ Vilnius.Lithuania, 2009 Group exhibition „Regionale 2010“ at the Kunsthalle Basel and Kunsthaus L6 Freiburg.Germany, 2009 calloborating with Performance Group ‘Universal Cosmopolitan Research Project‘ - Group Exhibition „Die Formkräfte des Kunstlebens“ Nancyhalle Karlsruhe, 2012 Performance ‚ I want to dance with you‘ Intim Bar, Frankfurt am Main, 2012 taking part of‚ Festival of young talents‘ Frankfurt am Main, curated by Anja Nathan-Dorn.Grants: 2012 Weidmann Stiftung Grant
Vytautas Jurevicius is interested in social systems, mappings, landscapes, communications as well as popular culture, sexuality and gender. He creates installations in a way of collage with collected sources from these topics, reacting the situation he observes. It manipulates the viewers implicitly and the performance enhances the communication between the installation and the viewers.
Vytautas Jurevicius will present his performance ‘we are so close but not really. we think we are so close but not. we are stranger but human’. The performance takes place in two different locations in the city and the viewers will observe it from distant viewing points. In the exhibition space Jurevicius installs his work ‘wo die kätzschen wachsen’ (‘where the cats are growing’), a large scale sand landscape with catkin bushes, photographs and various objects. The installation is a collage which derives from the artist memories - landscapes of forlornness between sea and forest, landscapes to hide and seek.

Lisa Meixner born 1983 in Stuttgart, lives and works between Vienna and Northern Italy. She studied at Städelschule Frankfurt with Simon Starling and at the Academy of Fine Arts Vienna with Manfred Pernice and Elisabeth von Samsonow. Lisa Meixner holds a Bachelor of Fine Arts from the Accademia di belle Arti Bologna, Italy. In 2010 Lisa Meixner participated in a three-month residency in Chengdu, China with the Studio Programme of Austrian Federal Ministry for Education, Arts and Culture.
Recent projects include left – right, Austro - Sino Arts Programme, Hong Studio Beijing, Übermorgenkünstler II, Heidelberger Kunstverein, Lummerland I, Toves Galleri, Kopenhagen, rhein II (sweeping into action) at NoMad, Projekt Display Frankfurter Kunstverein (2011)
Lisa Meixner takes existing words and objects, and creates an enlarged etymology via associative research that becomes installations, moving image work, and sculpture. With a combination of the historical, mythological and personal, she re-examines the words, objects and themes that fascinate her until their meanings are revealed to be increasingly elusive, undermining rigid definitions in favour of varied, even infinite possibilities and understandings. Her works mix personal logic with scientific inquiry in an attempt to depart from linear progression and materialise a never-ending wild thinking process.
At Kunsthalle Exnergasse Lisa Meixner will install her recent work ‘Underwater’, a video installation about the babylonian myth of sea goddess Tiamat and the assemblage ‘rhein I’, a work derived from the artist’s examination of the old greek term “rheo” (to flow), that combines historical and mythological narrations of the rivers Rhein and Yangtze. She will also present ‘Chiron’, a film about the human hand, about the relation between gesture and speech. Combining French anthropologist Andre Leroi-Gourhain’s theorie of evolution with the myth of the centaur Chiron the film narrates the hybrid existence of human beings in contemporary urban environments. Inspired by the film and myth double-bass player Nikolaus Feinig performs his musical piece ‘Wenn einer Zweigestalt ist (Of twofold nature) - Hommage an Chiron.’

Aki Nagasaka, born 1980 in Osaka, Japan, lives and works in London. She studied at Städelschule Frankfurt with Simon Starling and received Meisterschueler, completed CCA Kitakyushu Research Program, and holds a Bachelor of Fine Arts from the University of Texas at Austin. She is a recipient of Japanese Cultural Ministry Oversea Research Fellowship 2012 and currently conducting a research based project with a connection to Victoria and Albert Museum in London. Her recent exhibitions include Zauderberg - Städelschule Absolventen Ausstellung, MMK Museum für Moderne Kunst, Frankfurt (2012), Übermorgenkünstler II, Heidelberger Kunstverein, Heidelberg (2011), and *Project, potentially no one sees it, Immediate Territory, Oxford (2011).
Aki Nagasaka does not have a certain way of working or specialized media. By intuitively choosing a topic pops up in her life, she examines it broadly in cultural, historical, as well as fictional or speculative sources. With the collected materials and her own memory and association of the topic, she positions work in between factual and fictive. The work is her personal story about the chosen topic. Her interested topics include architecture, city, scenery, power, volcano, and carefully crafted objects.
At Kunsthalle Exnergasse Aki Nagasaka will present two works. „If on a winter’s night a traveler,“ its title indebted to the renowned novel by Italo Calvino, is a story of an imaginary journey of two persons, evolved from the carefully selected objects. The installation aims to creates a physical experience of the journey by employing objects, images, and sound. „Project T, T for Taut“ (working title) is Nagasaka’s exploration of a German architect, Bruno Taut, and his life journey around the globe as well as his artistic and intellectual journey into technological, social, and utopian universe. Nagasaka also attempts to find an ideological root of her home, the biggest new town in Japan, in Taut’s ideas and buildings. The installation is composed of a group of sculpture, photographs, and video.