The Wake (An arrangement of references with all the appearance of autonomy). An ongoing work based on James Joyce's most complex book Finnegans Wake, a part of a series that he conceived about four years ago and since then has been working on. The positioning of the words he has chosen from the book in relation to each other is based on their location on the page. 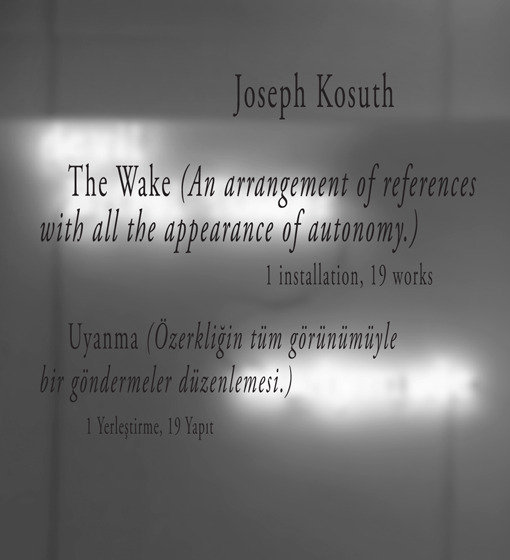 Kuad Gallery is pleased and honored to announce the exhibition by Joseph Kosuth, the most important representative of Conceptual Art since 1960s, which will open November 22 and be on view through February 2013.

The Wake (An arrangement of references with all the appearance of autonomy.)

This is the first presentation of an ongoing work based on James Joyce’s most complex book Finnegans Wake, a part of a series that he conceived about four years ago and since then has been working on. The positioning of the words he has chosen from the book in relation to each other is based on their location on the page in Finnegans Wake. Finnegans Wake is not yet translated into Turkish language; however Kosuth, with respect to the local culture, has decided to construct this installation of white neon words on gray surface (walls) in English and Turkish.*

Kosuth’s art made its first impact in the mid-1960s, when new linguistic and ideological theories attacked the fundamental presumption of Modernism at a time when Modern philosophy itself was deconstructed. Kosuth’s work was an exploration of the nature of art, and the production and role of meaning within art. He has been employing references to Sigmund Freud’s psychoanalysis, Ludwig Wittgenstein’s philosophy of language and to a rich synthesis of theories by Walter Benjamin, Jorge Luis Borges and Friedrich Nietzsche.

Kosuth is portrayed by art historians and art critics as an artist and a theoretician. In 1969 he published an essay “Art After Philosophy”, and claimed that art in its traditional and classical form and content and the related discourse had reached its end. The new art is a radical exploration of the meaning through which art gains its status as art and its cultural significance. What he commented at that time is still valid: “Being an artist now means to question the nature of art. If one is questioning the nature of painting, one cannot be questioning the nature of art . . . That’s because the word ‘art’ is general and the word ‘painting’ is specific. Painting is a kind of art. If you make paintings you are already accepting (not questioning) the nature of art.”

His visual language using photography and text at the beginning of his practice as well as making major installations with neon texts in numerous public spaces, museums and institutions all over the world has established the path to new aesthetics, form and artmaking that is prevailing since today. One of his first conceptual works One and Three Chairs (MoMa Collection), consisting of a physical chair, a photograph of that chair, and the text of a dictionary definition of the word “chair” has also been presented in Istanbul, on the occasion of his solo exhibition in Borusan Art Gallery (15 September-28 October 1999), featuring a work from the same year (1965) consisting of the mezzanine door, the photograph of the door and the text of dictionary definition of the word “door”. He had realized a special work for Borusan Art Gallery entitled Guests and Foreigners: Rossini in Turkey. A catalogue of this exhibition has been published.

Coming to Istanbul again after 13 years Kosuth’s installation in Kuad Gallery will re-open the discussion about the function, nature and status of art which is currently argued to be under the manipulating influence of global art market conditions. Furthermore his presence and work will surely have a very captivating impact on the understanding and perception of the contemporary art public of today’s global city Istanbul. And, above all, for the cognizance and perception of the young generation artists who seek for an interdisciplinary fusion of conceptual and intellectual content, form and aesthetics in today’s art making.