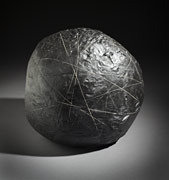 The Los Angeles County Museum of Art (LACMA) presents Lost Line: Contemporary Art from the Collection, featuring more than seventy-five artworks that consider notions of mapping, topography and monumentality as central themes. On view in BCAM November 25, 2012-February 24, 2013, the exhibition includes large-scale sculpture and painting installations, film, photography, and works on paper by a range of artists, architects, and scientists.

Drawn almost entirely from LACMA’s permanent holdings, Lost Line features numerous gifts to the museum by collectors and artists. With support from the Modern and Contemporary Art Council and the recently-formed acquisition groups Art Here and Now (AHAN) Studio Forum and Contemporary Friends, LACMA has been able to expand its holdings of contemporary art. Recent acquisitions featured in Lost Line include works by Mark Hagen, Analia Saban, Amalia Pica, and Gary Simmons.

Lost Line: Contemporary Art from the Collection takes its name from Gabriel Orozco’s mid-1990s sculpture, Lost Line. Orozco’s oily orb— fashioned from plasticine and cotton string—reveals both the process of its creation and the movement involved in its exhibition placement. It has been described by the artist as “the opposite of a static monument.”

A number of objects in LACMA’s exhibition similarly rethink the form and function of monuments by proposing bold and sometimes witty alternatives to the epic, including Shannon Ebner’s Raw War (2004), Harold Edgerton’s Stonehenge from Airplane (1944), and Robert Smithson’s Proposal for a Monument at Antarctica (1966). Making its West Coast exhibition debut, Steve McQueen’s video installation Static (2009) offers a detailed portrait of the Statue of Liberty while distorting the surroundings of America’s most renowned monument into abstraction.

The exhibition acknowledges the ongoing dialogue between artists and prominent thinkers from other disciplines through the inclusion of works from design and science. Visionary Buckminster Fuller’s influential Dymaxion Air-Ocean World Map (1981), for instance, is juxtaposed with works associated with land art and conceptual art, while inventor Harold Edgerton’s aerial photograph of Stonehenge is situated alongside works by Analia Saban, Claes Oldenberg, and Amalia Pica.

About LACMA
Since its inception in 1965, LACMA has been devoted to collecting works of art that span both history and geography-and represent Los Angeles's uniquely diverse population. Today, the museum features particularly strong collections of Asian, Latin American, European, and American art, as well as a contemporary museum on its campus. With this expanded space for contemporary art, innovative collaborations with artists, and an ongoing Transformation project, LACMA is creating a truly modern lens through which to view its rich encyclopedic collection.