Conceptual Art in Canada, 1965-1980. Mapping the diverse forms of conceptualism, the exhibition includes examples of performance art, film and video art, and many other art practices which broke new ground during the era. It brings together hundreds of works by more than 90 artists from across Canada in a sweeping survey of this important art movement. 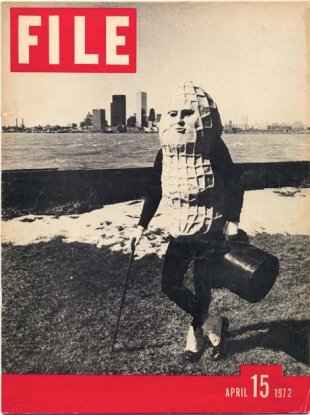 Brash, witty, touching and more than occasionally subversive, conceptual art revolutionized ideas of art in the late-20th century, creating new outlooks for artistic expression which continue to be influential today. Opening on September 29th at the Vancouver Art Gallery, Traffic: Conceptual Art in Canada 1965 - 1980 brings together hundreds of works by more than 90 artists from across Canada in a sweeping survey of this important art movement.

Five years in the making, this exhibition is the result of an unprecedented collaboration between curators from institutions across the country. “We are very proud to be part of this important collaborative exhibition,” said Gallery director Kathleen Bartels. “Traffic represents a significant contribution to the historical record of contemporary art in Canada and we are pleased to partner with other Canadian art institutions and galleries in organizing this landmark exhibition.”

Conceptual art emerged in the context of the social and political turmoil of the 1960s and 1970s – from feminism and gay liberation to anti-racism and anti-war movements – and presented a profound challenge to the institution of art. In Vancouver, as elsewhere, conceptual art was both inspired by and an active participant in the ferment and fervour of the times. From Vincent Trasov’s Mr. Peanut campaign in 1974... to Gathie Falk’s examination of society’s constraints on women in her 1972 performance Red Angel... to the tongue-in-cheek wit of N.E. Thing’s productions... Vancouver artists bucked tradition and traditional views of art.

Mapping the diverse forms of conceptualism, the exhibition includes examples of performance art, film and video art, and many other art practices which broke new ground during the era. “This was a period of amazing experimentation in art” said Grant Arnold, Audain Curator of British Columbia Art at the Vancouver Art Gallery.
“Conceptualism is one of the most wide-reaching and long-lasting artistic movements in the history of contemporary art and the movement’s influence in this country has long deserved this major recognition and attention.”

Traffic also presents notable early works by Christos Dikeakos, Rodney Graham, Jeff Wall and other now internationally renowned Vancouver-based artists. Other artists featured in Traffic include Vancouver’s Michael de Courcy, Carole Itter, Roy Kiyooka and N.E. Thing Co.; Toronto’s General Idea, Joyce Wieland and Michael Snow; Montreal’s William Vazan, David Tomas, Raymond Gervais and Rober Racine; Clive Robertson and Paul Woodrow in the prairies and pivotal conceptual artists such as John Baldessari and Lawrence Weiner who worked with artists in Atlantic Canada during this time period, making the Nova Scotia Centre for Art and Design into a crucible of artistic experimentation for artists in that region and across the continent.

Traffic: Conceptual Art in Canada 1965 - 1980 was first presented at the Universityof Toronto Art Galleries in 2010, and subsequently featured in Halifax, Edmonton and Montreal. Following its presentation in Vancouver, Traffic will travel to Badischer Kunstverein in Karslruhe, Germany in 2013.

The Traffic exhibition, tour and publication were produced with the generous assistance of the Canada Council for the Arts, the Museums Assistance Program of the Department of Canadian Heritage and the Nova Scotia Department of Communities, Culture and Heritage. The Vancouver Art Gallery is also very grateful for important support from Concord Pacific and Aymong Family Trust.

Curator Grant Arnold will be providing a media tour of the exhibition on Thursday, September 27th at 10am. Media are requested to RSVP to Carolyn Jack.