Interview Magazin 2. The focus is on a series of interview pictures that the artist created by inviting old and new friends and acquaintances to his atelier to sit for a portrait and discussion session. 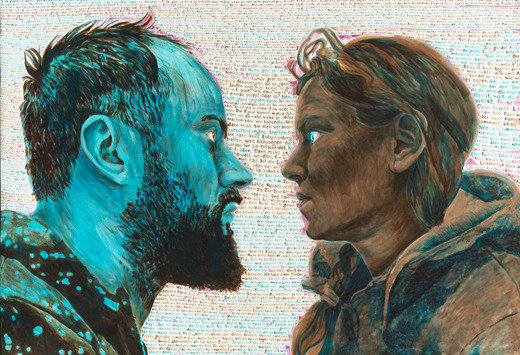 "The Other is a relief, as I am, not absolutely vertical existence.” – Maurice Merleau-Ponty in The Visible and the Invisible [1]

The Jette Rudolph gallery is very pleased to present Paule Hammer’s second solo show at its gallery in Berlin. Part 1 of Paule Hammer’s “Interview Magazine” was shown at the Leipzig gallery, “Laden für Nichts,” and the Berlin exhibition picks up where it left off. Once again, the focus is on a series of interview pictures that the artist created by inviting old and new friends and acquaintances to his atelier to sit for a portrait and discussion session.
The artist’s own dreams as well as larger world-encyclopedia-like issues on the problems facing humanity had previously provided the starting material for Hammer’s motif-and-text-filled pictures, which combined personal experiences with stories from friends and media information. But now, in the intimate atmosphere of a portrait session held in his own atelier, the artist opens himself more than ever before to his subjects’ personal dreams, experiences, desires or theories about the world and humanity in general – yet always within the context of a straightforward social situation that forms the basis for this close exchange.
Landscape painting, the still life and the portrait are just some of the traditional art history genres that intentionally underlie the artist’s works. But Hammer takes these genres, surpasses their limits, and creates an expanded reference field. So they are not limited to representing familiar local situations or individual human characteristics, but transgress the limits of their own forms: ”Surpassing forms does not mean … breaking away from forms, alienating oneself from their location. To validate the formless does not call for non-forms; instead, it is about agreeing to work with forms.”[2] Two factors are behind the specific dynamics in Hammer’s works: the elimination of the rules governing traditional representation and the use of different contexts.

On the image’s projection surface or, more specifically, on canvas or cardboard, Hammer employs various strategies to integrate the image and information in a complementary way or to juxtapose them as utopic parallel worlds. Hammer’s system is always characterized by the following: he fuses dichotomous areas to offer a complex look inside human beings.
So, in “Juliane 1,” the concept that is still relatively vague on developing a fictive male artist figure called “Alain d’Arc,” which the artist portrayed here and Hammer are in the process of discussing, is positioned like a text slide behind the profiles of the interview partners that are superimposed over it. By contrast, in “MIG,” an aerial view of a former East German military housing complex dominates in the foreground. The protagonist, “Nicole,” spent her childhood there. Her sad memories are presented in text that is superimposed over the image like a window: “... And there were never people on the street who were simply out on a walk... An alarm signal sounded at six. After that, it was always quiet.” Unlike his (sound) sculptures, in his paintings Paule Hammer takes advantage of the medium’s special nature and uses his paintings as an “intermediary” level to offer viewers a view of things, people and information “... that puts us into a relationship with others and the world and allows us to represent the self, even one’s own body.”[3]
In his paintings, all the material the artist has collected is transformed into abstract shapes and text designs that represent the distance between the self and the outside world. Hammer thereby presents the (self)-perception of the remembering subject (or his protagonist) as images of the self, which are based on specific structures that are not rooted in entities, but rather in dynamic patterns, in relationships between the human being and the world that are in constant motion.

But interrelationships not only emerge and become visible within the image. They extend from the image to the actual gallery space and are inextricable from the exhibition’s layout. The artist is especially known for his almost sensational use of background colors. By contrast, in “Nicole,” Hammer uses fine brush strokes for the lineature that extends far beyond the picture’s field and the protagonist’s network of relations. Powerful contouring is also used for various motifs or text sections and works to keep them from canceling each other out. Lastly, the artist provokes the transgressions that occur when the boundaries of the projection surface or rather of the canvas or paper are overstepped and branching “relationship arms” are painted directly on the wall to connect various paintings. Paule Hammer’s objective is not to give the exhibition a theoretical superstructure, but rather to create a context that is open to debate, in other words, to create an image where issues related to existence, appearance and meaning are open to interpretation.