Exhibition Inspired by Hit Television Series Provides an Innovative Dialogue Between Los Angeles and France. Organized by FLAX (France Los Angeles Exchange) in partnership with the Palais de Tokyo, Paris; the Department of Cultural Affairs, City of Los Angeles; "LOST (in LA)" is the most significant exhibition of works by contemporary and modern artists from France and Los Angeles yet to be presented in the US. The show brings together approximately 60 works in a groundbreaking new exhibition project. 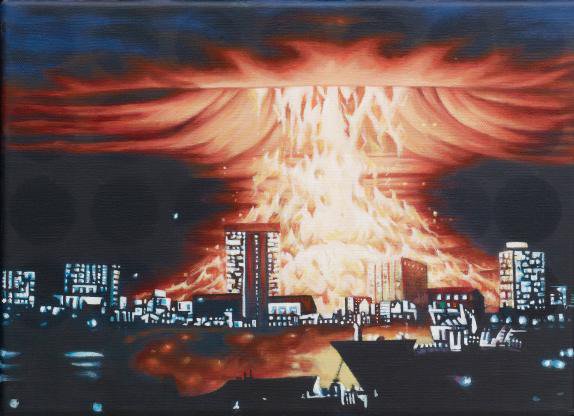 LOST (in LA), the premiere exhibition presented by FLAX (France Los Angeles Exchange) in partnership with the Palais de Tokyo, Paris, and the City of Los Angeles Department of Cultural Affairs (DCA), will feature a major installation of works by contemporary artists from both Los Angeles and France. The exhibition, curated by former director of Palais de Tokyo Marc-Olivier Wahler, will present visitors with a visual and experiential narrative loosely inspired by the hit television series “LOST.”

“LOST “ – one of the influential TV series of this decade – is considered by many artists as a source of inspiration as well as disappointment, as it struggles to deliver a true formal link that would connect the different layers of time and space. The exhibition LOST (in LA) comes from the desire expressed by many artists to create this formal link.

“When FLAX came to me with the concept of a joint exhibition, we sought to find a way to combine France’s deep connection with the Contemporary Art movement and Los Angeles’ roots in compelling storytelling. I am proud to say that with LOST (in LA) we have surpassed our original expectations” said Jean de Loisy, Palais de Tokyo President.

“LOST (in LA) supports the exchange and dialogue that FLAX thrives to promote through various connections made between France and Southern California. We are thrilled that Marc- Olivier Wahler is bringing together this outstanding group of artists to the heart of Los Angeles. It is our most ambitious project to date, and we plan to launch other initiatives throughout Los Angeles and surrounding communities,” said Elisabeth Forney, FLAX Executive Director. Visitors to LOST (in LA) will find themselves cast as characters in a fabulous drama that is played out in the Los Angeles Municipal Art Gallery (LAMAG) at Barnsdall Park, a 36-acre former private estate and artists’ colony situated on a hilltop in the heart of the Los Feliz neighborhood. Long regarded as one of Hollywood's most creative, diverse, and accessible communities, this historic location provides the perfect setting for LOST (in LA), with its majesty and beauty becoming as much a part of the exhibition as the island did on the series that inspired the style of the exhibition’s narrative.

LOST (in LA) aims to discover the lost history of radical exchange between artists from France and Los Angeles and to participate in the re-birth of Los Angeles as an artistic capital. LOST (in LA) will be on view at the Los Angeles Municipal Art Gallery in Barnsdall Park at 4800 Hollywood Boulevard, Los Angeles, California, 90027, from December 1, 2012 to January 27, 2013. This exhibition will be free and open to the public.
www.lostinla.com

LOST (in LA) is presented by FLAX (France Los Angeles Exchange) in partnership with the Palais de Tokyo, Paris, and the City of Los Angeles Department of Cultural Affairs.
The exhibition is made possible by generous support from The Capital Group Companies Charitable Foundation; GRoW Annenberg; the Institut français and the French Cultural Services in Los Angeles; Blake Byrne; Eva and Marc Stern; and Les Amis de LOST (in LA). The exhibition is supported, in part, by the Los Angeles County Board of Supervisors through the Los Angeles County Arts Commission.
Generous in-kind support is provided by the Los Angeles Municipal Art Gallery and Moving Parts Inc. Additional support is provided by Petit Ermitage – A L’Ermitage Hotel, and GuestHaus Residency. Promotional support is provided by The Museum of Contemporary Art, Los Angeles (MOCA). FLAUNT is the Official Media Partner of LOST (in LA).
LOST (in LA) is organized with the guest participation of the Prix Marcel Duchamp. The exhibition is an event of Ceci n'est pas...Art Between France & Los Angeles, a five-month program of French-American collaborations in contemporary art.
The publication is an issue of the Public Fiction quarterly journal acting as a catalogue for the exhibition.
Louis Roederer is the Official Champagne of LOST (in LA).

About FLAX
FLAX (France Los Angeles Exchange) is a non-profit 501(c)(3) charity based in Los Angeles. Founded in 2006, FLAX works to facilitate cultural exchange between Los Angeles and France through public and cultural events in Southern California. Recognizing and reinforcing the crucial links between these two cultural epicenters, FLAX works closely with local organizations, pooling private and corporate resources to foster cultural dialogue between French and American people in the United States. With its independent structure, FLAX operates with autonomy and transparency. Operating costs have been reduced to a minimum in order to turn the maximum of donations into efficient programs. The LOST (in LA) exhibition is the first of many initiatives that FLAX has planned to launch in Los Angeles and surrounding communities.
www.flaxfoundation.org

About DCA
DCA (The City of Los Angeles Department of Cultural Affairs) generates and supports high quality arts and cultural experiences for Los Angeles’ 4 million residents and 26 million annual visitors. DCA advances the social and economic impact of the arts and ensures access to diverse and enriching cultural activities through grant making, marketing, public art, community arts programming, arts education, and partnerships with artists and arts and cultural organizations in neighborhoods throughout the City of Los Angeles.
www.culturela.org and www.lamag.org

About Palais de Tokyo
The Palais de Tokyo is a 21st-century cultural institution with a public service mission. It is a place where today’s artists and different sectors of the public can explore the emergence of groundbreaking ways of doing things, thinking, and living. In 2012 the Palais de Tokyo became one of the largest sites devoted to contemporary creativity in Europe. It now extends right to the River Seine, forming a link on the side of the hill between the Eiffel Tower and the Champs- Elysées. Lost ( in LA) is part of the expanding programming efforts of the Palais de Tokyo.
www.palaisdetokyo.com