De Paviljoens 2001-2012. The Museum concludes its program with two exhibitions of its collection and archive that reflect the scope of the projects that have been developed in over a decade of working in and in relation to the new town of Almere. 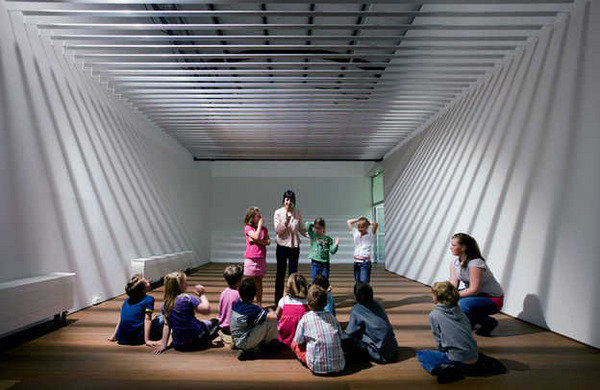 Museum De Paviljoens concludes its program with two exhibitions of its collection and archive that reflect the scope of the projects that have been developed in over a decade of working in and in relation to the new town of Almere: People can only deal with the fantasy when they are ready for it and It’s an ongoing Process: designers for De Paviljoens 2001–2012.

In 1994, the Aue Pavilions that were designed by architects Paul Robbrecht and Hilde Daem as temporary exhibition halls for Jan Hoet’s Documenta IX were transplanted from Kassel to the edges of the city center of Almere that was being developed according to a masterplan by Rem Koolhaas / OMA. By that time, the new town was nearing its third decade. From 1998 on the pavilions were the base for ACHK De Paviljoens, renamed to Museum De Paviljoens under the directorship of Macha Roesink since 2001. Over the years, a program unfolded with artists like Bik Van der Pol, Yael Davids, Job Koelewijn, Barbara Visser, Meschac Gaba, Germaine Kruip and Suchan Kinoshita.

The transparent architecture with its glass facades served as a blueprint to a program that encompassed both projects in- and outside of the museum space, while its origins in Documenta laid the conceptual foundations for an approach that strived to do justice to the forefront of artistic developments and share these developments with a wide audience. The motto 'it's an ongoing process' served as a guiding principle for both the rooting of the institution within the ever-changing environment and community of a new town, and De Paviljoens' commitment to and ongoing involvement with the artists and the development of their work. The production of new (site- and context specific) work has always been at the core of its program.

The program centered around artists that are based in the Netherlands: while group shows like Black My Story (2003), The Urban Condition (2006), and Unknown Territory (2009) put their work in an international context, the series of solo shows of mid-career Dutch based artists highlighted their practice in their first museum overview in the Netherlands. In this series, each artist was encouraged to use the entire building of De Paviljoens to reflect on their oeuvre and simultaneously develop new work.

Forced by the combination of local politics and the new cultural policy of the Dutch government, the program of Museum De Paviljoens will no longer be continued from the summer of 2013 onwards.