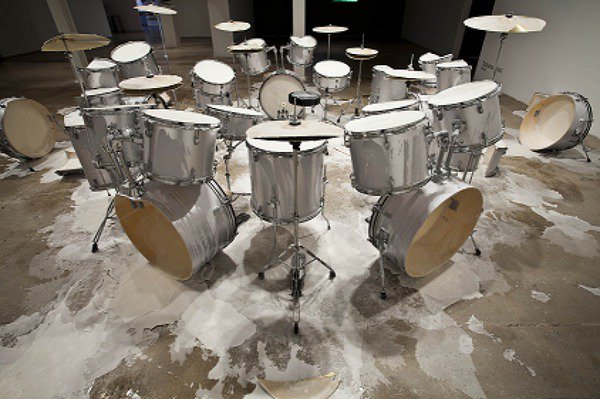 Miami, October 2012 – Unsaid/Spoken, Selections from the Ella Fontanals-Cisneros and CIFO Collections will be on view from December 5 – March 3, 2013. The exhibition includes about 38 pieces by 24 artists from different generations and latitudes, who share a common experience of promoting and transforming art practices.

According to CIFO’s Curatorial Award recipients Moacir dos Anjos and José Roca, “this exhibition brings together work that testifies to the tension between what is yet to be said (or cannot be uttered) and the aftermath of communication, when all has been said and done. Silenced speech, timid elocutions, unintelligible languages, unknown codes, forgotten tongues, the somewhat obscure discourse of science, censorship, and repression, slowly give way to murmurs, connections, bridges, open conversations and conclusive statements. Following an intuitive process of formal association and conceptual juxtaposition, the show intends to be seen as an exercise in curatorial collaboration.”

José Roca is a curator based in Bogotá, Colombia. Most recently he served as the Chief Curator of the 8th Mercosul Biennial. Previously he was the artistic director of Philagrafika 2010: The Graphic Unconscious—a festival of contemporary graphic art taking place in 2010 in various exhibition spaces in Philadelphia, USA. One of his most notable contributions was his direction of the curatorial program at the Biblioteca Luis Ángel Arango, Banco de la República, Bogotá where he transformed it into one of the most respected institutions in Latin America. Other curatorial contributions include: co-curator of the 1st Poli/grafica Triennial in San Juan, Puerto Rico (2004); 27th São Paulo Biennial, Brazil (2006); and Encuentro de Medellín MDE07 (2007). He has curated numerous exhibitions for institutions all over the world including: Traces of Friday: art, tourism, displacement, ICA - Institute of Contemporary Art, Philadelphia, USA (2003); Botánica política, Sala Montcada, La Caixa, Barcelona, Spain (2004); Phantasmagoria: Espectros da Ausência, touring exhibition organized by iCI (Independent Curators International) ; and Muntadas: Mecanismos da Imagem, Pinacoteca do Estado de São Paulo, Brazil (2010). José Roca is currently the Estrellita B. Brodsky Adjunct Curator of Latin American Art at Tate, London, and Artistic Director of FLORA ars+natura, an independent space for contemporary art in Bogota, Colombia.

Moacir dos Anjos is a curator and art critic based in Recife, Brazil. Most recently he was a curator of the Brazilian Pavillion at 2011 Venice Biennale, Chief-Curator of the 29th São Paulo Biennial (2010), co-curator of the 2007 Mercosul Biennial and curator of the 2007 edition of Panorama da Arte Brasileira at the Museu de Arte Moderna de São Paulo. Dos Anjos is a Research Fellow at the Fundação Joaquim Nabuco, Recife, Brazil and was director of the Museu de Arte Moderna Aloísio Magalhães (Mamam), also in Recife (2001-2006). He also curated a number of solo exhibitions by Brazilian contemporary artists, including Cildo Meireles, Rosângela Rennó, Nelson Leirner and Rivane Neuenschwander. Moacir dos Anjos has published extensively on contemporary art and artists, both in Brazil and abroad. Among his recent essays are “Where All Places Are”, on Cildo Meireles (London: Tate, 2008) and “Inventing Politics”, in Plegaria Muda - Doris Salcedo (Lisbon: Centro de Arte Moderno, 2011).

The Cisneros Fontanals Art Foundation, is a non-profit organization established in 2002 by Ella Fontanals-Cisneros and her family to support artists who are exploring new directions in contemporary art. CIFO fosters cultural understanding and educational exchange through three primary initiatives: a Grants and Commissions Program for emerging and mid-career visual artists from Latin America; an exhibitions program showcasing work by Latin American artists and international contemporary art from the Ella Fontanals-Cisneros Collection at the CIFO Art Space; and foundation-initiated support for other arts and culture projects.