About Stupidity explores the urgency of stupidity, its hiding places, as well as its public manifestations, and mainly - its Janus-face. In 'Feature' Shezad Dawood has created a new, hybrid cinematic genre based on the American Western, yet one which takes place in the British countryside. For Itay Ziv, transforming the Collection Gallery of the Museum into a war room is a vital act in light of the personal-security situation which has ostensibly accompanied Israel since its establishment. 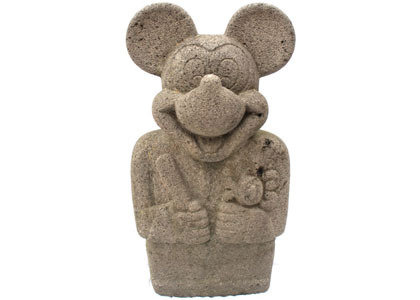 Albert Einstein once said: "Only two things are infinite: the universe and human stupidity, and I'm not sure about the former." This exhibition might be a testimonial to his insight: stupidity has such an evasive character that to illuminate or define it with visual means equates the heroics of suicidal tendencies, culminating in glorious failure.

Furthermore, the line between criticism (namely, an attack on stupidity via art) and a work that draws on the well of stupidity and stems from a void where knowledge is excluded as a precondition for a truly brilliant originality—that line is so thin and fuzzy that it boggles the mind in coming to terms with the very existence of stupidity. That stupidity is enjoying a comeback as a virtue, shedding its negative aura, is evinced by many examples, such as the Diesel campaign, a corporation manufacturing wardrobes for hipsters, launched in 2010 under the title "Be Stupid." Indeed, 2010 became the year in which "smart" lost its allure, and stupidity began to be regarded as an antidote to the malignancy of intelligence.

Stupidity seems to be a quality that we experience or encounter at every point in our lives. In general, it is a characteristic we ascribe to others, and only rarely, in an afterthought, to ourselves. Some cultural constructs—such as bureaucracy, war, racial or religious prejudice—are stupid by their very nature, but not every stupidity is as stupid as it seems. It can be life saving in many situations, when speaking the truth and following reason may bring upon fall, disgrace, and even loss of one’s own existence.

The most famous remark about stupidity comes from Friedrich Schiller, who asserted in his Maid of Orleans that "against stupidity the gods themselves contend in vain," not that the gods were spared their share of stupidity, bearing in mind the fanatical approach with which they arm their adherents.

Artists have always been fascinated by the notion of stupidity, because they know that the double face of stupidity—as a prerequisite to the making of a good work, but also as a sorry consequence once it fails—requires a special expertise and a state of alertness. They recognized this evasive quality long ago, and have employed it in their service as well as a target to be resisted. In the fine arts, this double nature of stupidity—as a source of inspiration, being the very first sediment of the artwork, and simultaneously, as a negative quality—finds expression in the works of many.

The exhibition thus explores the urgency of stupidity, its hiding places, as well as its public manifestations, and mainly—its Janus-face. The participating artists transpire in the channels of expression which stupidity provides its researchers. Some of their works offer ironical comments, some are full of rage, and yet others accept stupidity as a fact of life with a stoic shrug.

curated by Drorit Gut Arie, will be presented at the Spot, Cinema and Media Room

An offspring of "multiculturalism," a British artist born to an Indian father and a Pakistani mother, Shezad Dawood's works undermine the rigid division between cultures and nations. In Feature he has created a new, hybrid cinematic genre based on the American Western, yet one which takes place in the British countryside. It is a Western which was invaded and bisected by other cinematic genres, among them zombie movies, Wagnerian opera, Viking films, etc.

A cinematic work typically invites us to pursue the unfolding of a plot, thereby revealing a cohesive story. Dawood's film, on the other hand, does not yield to these expectations. In order to view it, one must suspend the search for the prevalent conventions of cinema. Rather than seeking logic, one may surrender to the illogical, which requires us to abandon the search for order, sequence, cultural narrative, and historical justice. Dawood criticizes the West and its colonialist aspirations, yet conveys that critique by means of humor and techniques derived from fiction film.

Shezad Dawood (1974), an artist, curator, and scholar, was trained at Central St Martin's and the Royal College of Art before undertaking a PhD at Leeds University. His works have been exhibited throughout the world, in such venues as Tate Britain, London; Videonale, Taiwan; the Venice Biennale; etc.

In times of battle, the situation room is the beating heart which channels blood to the body's various organs, or the brain which gives commands. For Itay Ziv, transforming the Collection Gallery of Petach Tikva Museum of Art into a war room is a vital act in light of the personal-security situation which has ostensibly accompanied Israel since its establishment. Its construction in an art gallery responds to a public situation. It is a "natural-necessary" outcome of confrontation with the Israeli reality, which is chronically on the verge of catastrophe, permanently sustaining a state of emergency. The acts taking place in the military-artistic nerve center are administrative, observational, and controlled; acts of relaxing and control, examination and defense, all of which fail to lead to a realistic solution.

The gallery will be transformed into a dynamic space, a facility oscillating between the public and the private, the realistic and the psychotic, between its known form as a military room and an artist's private studio. Ziv contemplates art's upset usability in preparing for the next war. In many respects, he refers to war as an a-priori disrupted situation for which one cannot prepare, let alone function normally and orderly in it. In this context, Ziv relates to the nuclear threat on Israel and the public fears it triggers. As a responsible artist who wishes to better his preparedness, he turns to professionals and authorized parties for relevant advice. The interviews with them, however, expose the apparatuses by which anxiety is instilled in the public, which have become an operative tool in the hands of security professionals, mainly attesting to their eroded deterrence. Thus, the public remains ultimately indifferent to them, castrated, unable to feel fear, which is a prime survival mechanism; in other words, we are left unable to protect ourselves.

Semi-documentary for the most part, Ziv's works flirt with the documentary and undermine it at the same time. They always maintain direct relations with reality, yet deconstruct their faithfulness to the concrete via editing manipulations. Editing is a powerful tool in Ziv's hands, intended not to distort reality, but to lay the dominant vein concealed in it bare. The current work engages not only in a description of hysteria, but also draws attention to the apparatuses generating it, while exposing the economic, political, and ideological mechanism at its core. Ziv's Situation Room transpires on the line between fiction and reality. Clinging to both these poles is a tactic often used in his oeuvre to discuss intricate, potentially explosive subject matter.