The exhibition GROTESQUE! 130 Years of Witty Art is the first to examine the significance of the grotesque in the fine arts. 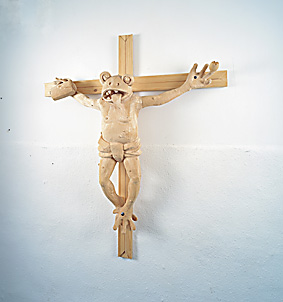 The exhibition GROTESQUE! 130 Years of Witty Art is the first to examine the significance of the grotesque in the fine arts. The grotesque, which has fascinated artists since ancient times, forms an alternative world to the world of truth and beauty. It stands for the strange, for everything different that lies beyond order and limits. Its roots lie in the myths and rites of prehistoric times, in the comedy and dancing of Ancient Greece and Ancient Rome, and in the popular tradition of the carnival, which has existed for centuries and was especially strong in the Middle Ages.

GROTESQUE! 130 Years of Witty Art presents works possessing those characteristics attributed to the concept of the grotesque in Meyers Konversationslexikon (an influential encyclopaedia) in 1895: "The result of a humour which - apparently without rhyme and reason - combines the most heterogeneous elements, because, unconcerned with individual things and merely playing with its special features, it everywhere takes whatever may serve its zest for life and high spirits." What possibilities the grotesque has to express and demonstrate an alternative culture is the central question that guides the entire exhibition.

Full of disrespectful wit, the grotesque gained in importance as a novel aesthetic approach in the late 19th and early 20th centuries, above all in German-speaking countries. The starting-point was Arnold BÃ¶cklin?s grotesquely comical pictorial compositions at the end of the 19th century. Beginning with the personality of this artist, who has remained controversial to this day, the development of an "alternative modernism" is traced, in which the subversive power and the wit of the grotesque are inherent elements. This exhibition is the first to accord BÃ¶cklin the role of the pioneer of a strange German modernism. Among the artists who were inspired by his works peopled with human animals and animal human beings were Lovis Corinth, Franz von Stuck, Max Klinger, Emil Nolde, Alfred Kubin, and Paul Klee. They, too, used distortion and blending to create a "topsy-turvy world", a counterweight to the familiar order of things.

In Munich the grotesque first flowered around 1900. Important artists like Paul Klee, Alfred Kubin and Thomas Theodor Heine lived and worked in Munich. The artists? interest in the grotesque went hand in hand with the founding of a series of humorous and satirical German magazines, such as Ulk (Joke), Lustige BlÃ¤tter (Comic Cuts), Simplicissimus, and Narrenschiff (The Ship of Fools). With their grotesquely comical scenes and dialogues Karl Valentin and the cabaret Die Elf Scharfrichter (The Eleven Executioners) became archetypal characters and institutions in Munich. One of Valentin?s successors today is the Munich author, director, actor and artist Herbert Achternbusch, who in his films creates fantasy alternative worlds full of wit and irony. GROTESQUE! 130 Years of Witty Art focuses on the relationship between the rise of the cabaret and the further development of the fine arts in Germany, Austria and Switzerland - a relationship that has hitherto been largely ignored.

The Dadaist Cabaret Voltaire, founded in Zurich in 1916, started the process of fusing cabaret and fine art. This development reached a climax in 1920 at the First International Dada Fair, where the local Dadaists literally burst the barriers between these two art forms with their performances. Dada?s revolt against the sacrosanct concept of art and bourgeois culture was followed after the Second World War by art movements which attacked capitalism and imperialism. The Fluxus artists criticised the mechanisms of a market economy in a humorous way, but with serious intent.

Around the same time, the Wiener Gruppe (Wiener Group) established itself in Austria around Oswald Wiener, Gerhard RÃ¼hm and others, who rebelled against the stuffy bourgeois society with their provocative, grotesque and macabre texts. The Wiener Aktionisten (Vienna Campaigners) were considerably more aggressive in their approach and caused outrage with their taboo-breaking events. The late 60s and 70s were characterised by anarchic and satirical campaigns against the Establishment.

While the grotesque developed into an alternative culture in the course of the 20th century, today it seems to have moved from the periphery of society into the centre. It no longer represents a counter-movement that obviously criticises society, but has assumed a more individual role. In her distorted and twisted bodies, the painter Maria Lassnig treats the human form in a way characteristic of the grotesque. Franz West?s PassstÃ¼cke (Fitting Forms) suggest strange bodily excrescences; Fischli & Weiss use food in a parodistic manner. John Bock and Jonathan Meese play the role of master of ceremonies in their own fictional worlds; the former presents a playful fantasy cosmos; the other creates a universe reminiscent of Alfred Kubin or Max Klinger?s pictorial worlds. What all these works have in common is the potential to explore the topsy-turvy world as a strange mirror of reality.

In contrast to Frankfurt, where the exhibition can be seen in the Schirn Kunsthalle (Schirn Art Gallery) until 9 June, the Munich exhibition will not present the works in chronological order, but according to formal and thematic considerations. The direct juxtaposition of works from different decades allows the visitor to perceive the exhibition from a different perspective. In this way the order the pictures are hung in takes the many levels of the subject of the exhibition into account.

A critical point of the exhibition is the Dada Room in the centre of the former "Ehrenhalle" (Hall of Honour). By locating it here, a reference is made to the history of the Haus der Kunst. From 19 July to 30 November 1937, the Arcades of the Munich Hofgarten housed the exhibition "Entartete Kunst" ("Degenerate Art"), comprising about 600 paintings, statues, prints, photographs, and books by about 120 artists. For the layout of this exhibition the National Socialists in part adopted Dada design principles in order generally to discredit the works of art. Works by Kurt Schwitters and Paul Klee or front pages of the magazine Der Dada and other items were hung on a wall clumsily daubed with an abstract composition by Wassily Kandinsky. Above the pictures was the slogan "Take Dada seriously - it?s worth it", which had been taken from a poster from the First International Dada Fair. Both the central importance of Dada for the grotesque in the fine arts and its position as a counterweight to the National Socialist aesthetics are sufficient reason to display the works of this art movement in the centre of the "Ehrenhalle" built by Ludwig Troost.