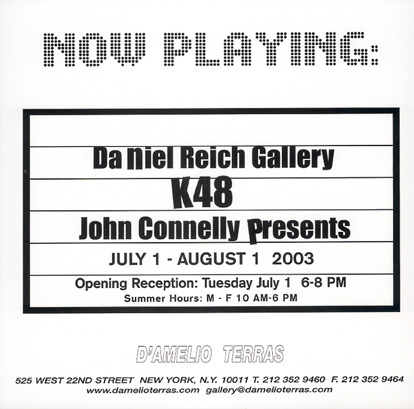 For the month of July, D'Amelio Terras has invited three emerging artistic programs â€¹Daniel Reich Gallery, K48, and John Connelly Presentsâ€¹ to occupy our west 22nd St. ground floor space. Each will operate their businesses within our walls and present exhibitions that will bring together an array of emerging artists, writers, designers, and musicians. The success of recent alternative art fairs such as the Stray Show in Chicago and Scope in New York depended heavily on a spirit of collaboration and dialogue between participating galleries. It is our hope that the communal environment and the collaborative nature of this venture will create a dialogue and energy that will benefit our respective programs and all of our visitors. This exhibition broadens the role of the contemporary art gallery to not only include the recognition and exhibition of individual emerging artists but also to search for and highlight the energy, new ideas, and talents of the founders of emerging and alternative spaces.

Daniel Reich Gallery has been open at 308 W. 21st St. #2A since December 2001. This autumn, the gallery will move to a storefront space in Chelsea. Prior to opening his own exhibition space, Daniel was director of Pat Hearn Gallery. He will be presenting 'The Birdman Returns' featuring artwork by Christian Holstad, Bjorn Copeland, Nick Mauss, Paul P, and others.

K48 has been publishing magazines and organizing performances, installations, and exhibitions since 2001. Primarily run by Scott Hug with the assistance of Bengala, they have published three issues and a fourth is due in August 2003. They will present limited edition audio CDs, CD-ROMs, and DVDs by over seventy-five artists, slackers, anarchists, poets, and punk rockers.