Songs of Praise for the Heart Beyond Cure. Renowned for their frank, poignant, and humorous narratives the two artists often suggest that existence is abject, farcical, and messy working in a variety of different media. 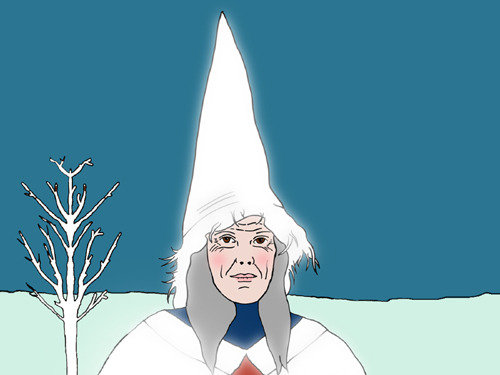 Emily Vey Duke (Halifax, Nova Scotia) and Cooper Battersby (Penticton, British Columbia) have been an artist duo since 1994. They work in a variety of different mediums, including printed matter, installation and sound, but their primary practice is the production of episodic video. Renowned for their frank, poignant, and humorous narratives the two often suggest that existence is abject, farcical, and messy. Emily Vey Duke received her BFA from the Nova Scotia College of Art and Design, and completed her Masters at the University of Illinois at Chicago.

Cooper Battersby received his diploma in computer programming at Okanagan College, and completed his Masters in Fine Arts at the University of Illinois at Chicago. Their tape Being Fucked Up (2000) has been awarded prizes from film festivals in Switzerland, Germany and the USA. I am a Conjuror (2004) has received prizes from the Ann Arbor Film Festival and the Onion City Festival.

They have won several awards at international video and film festivals; most recently Beauty Plus Pity won the Best of the Festival at the 2010 Ann Arbor Film Festival. Duke and Battersby were finalists in 2005 and 2010 for the Sobey Art Award. Their work has been exhibited in group shows throughout Canada, abroad in Japan, the United States, Belgium and the UK. Recent Solo exhibits include “Fantasia” (with Shary Boyle and Daniel Barrow) at Jessica Bradley Art and Projects, Toronto ON in 2006, The New Freedom Founders, Video Pool, Winnipeg, MB in 2005 and Curious About Existence. Mercer Union, Toronto ON in 2004.

The exhibition is produced by the Foreman Art Gallery and financially supported with funds from the Canada Council for the Arts.