Paries Pictus. The artist utilizes the walls of the gallery for a site-specific intervention. A group of students are invited to use oversized crayons to color in geometric vinyl graphics applied directly to the walls by Rhode. 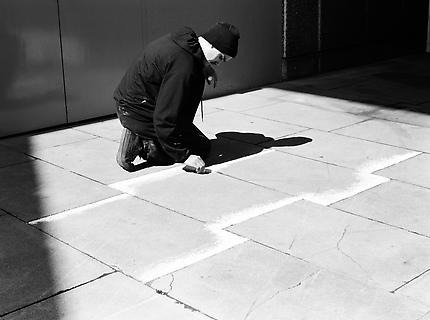 At 201 Chrystie Street, Rhode will utilize the walls of the gallery for a site-specific intervention entitled Paries Pictus. The artist has partnered with Time In, a New York City-based organization that specializes in arts education for kids from underserved elementary schools. A group of approximately 40 to 50 students, ranging in age from six to eight, from PS 63 in the South Bronx will be invited to use oversized crayons to color in geometric vinyl graphics applied directly to the walls by Rhode. Paries Pictus was first enacted at the Castello di Rivoli in Turin, Italy, in 2011.

This past November, Roxana Marcoci, Curator of Photography at the Museum of Modern Art, New York, invited Rhode to participate in Paris Photo Platform, an experimental platform for the critical discussion of photography. During the Vernissage, Rhode performed Darkroom, 2012. The artist’s digital animation Open Court, 2012, was also widely screened at this year’s Art Basel Miami Beach as part of the fair’s Art Video and Art Kabinett programs. A forthcoming solo exhibition is scheduled for the National Gallery of Victoria, Melbourne, Australia, in May 2013.

Robin Rhode was born in 1976 in Cape Town, South Africa, and raised in Johannesburg. He graduated from the South Africa School of Film, Television and Dramatic Arts, Johannesburg, in 2000. Given his first major museum solo show by Haus der Kunst, Munich, Germany, in 2007, Robin has since had major solo exhibitions at a number of important museums around the world, including the Hayward Gallery, London (2008); The Wexner Center for the Arts, Columbus, Ohio (2009), and Los Angeles County Museum of Art, California (2010).