With the cycle 'Lebensmittel' Schmidt, who was born in Berlin in 1945, has brought his series of large-scale projects to a close. In spring 2012, after five years of planning and implementation, the photographic essay on the processing of foodstuffs in Europe will be published for the first time. 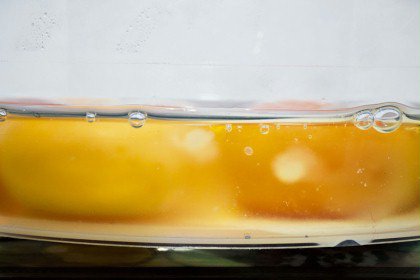 Michael Schmidt owes his outstanding position in contemporary photography to his ability to translate seemingly contradictory elements in his photography into a harmonious whole. While his constant search for novel approaches to photographic and social issues accounts for his singular status, his innovative project work and his extreme commitment have been considered a model for a generation of younger photographers.

With the cycle “Lebensmittel” Michael Schmidt, who was born in Berlin in 1945, has brought his series of large-scale projects to a close. In spring 2012, after five years of planning and implementation, the photographic essay on the processing of foodstuffs in Europe will be published for the first time.

Since 2006 Schmidt has been photographing Norway’s fish farms, Germany’s industrial bakeries and Italy’s apple-processing industry. As in the series “Somewhere”, for which Schmidt travelled through provincial southern Germany documenting the “loss of a local basis of identity” (Schmidt), the images of the “Lebensmittel” project contain no clue to the actual place where they were taken: The more or less compete disappearance of a local context for production, processing and packaging of foodstuffs makes it impossible for an observer to tell whether, for example, a slaughterhouse is located in Spain, France or the U.K.

Unlike some of the artist’s earlier series, these photographs do not betray an attitude of angry denunciation. Schmidt’s vision here is characterized by extreme clarity and hardness. The look into the bread baskets, the cages of the fish farms, or the apple-washing machines in his serial analysis is occasionally reminiscent of the objective photography of the 1920s. Yet it is precisely the contrast between the latently optimistic attitude of the classical photographers, who presented the motifs they took from industrial production in a perfect aesthetic setting, and Schmidt’s realistic vision that leaves one with an unsettling impression of the project as a whole: each individual image demands an objective appraisal, although the overall effect of the series, composed as it is of repetitions, emphases and rhythms as well as the multiple cross-references between the photographs, ultimately give the lie to the seemingly dominant air of objectivity.