This exhibition is a group show aiming at understanding who is "the public enemy" today through the questions of destruction, confinement or act of vandalism. 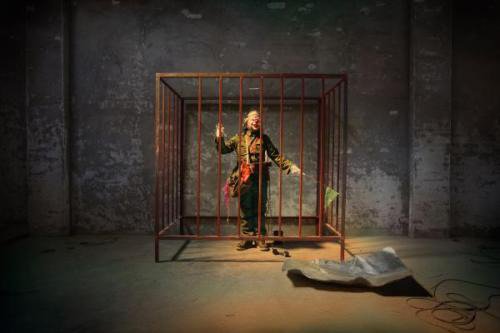 This exhibition is a group show aiming at understanding who is ' the public enemy ' today through the questions of destruction, confinement or act of vandalism. “ What is the place for creativity in prison? How does one survive in prison? As British artist Sarah LUCAS, puts it : in prison the only freedom is freedom of imagination, so I thought let’s see what they are doing with this freedom there...” Barbara Polla adds.

For Mat COLLISHAW the question of confinement is always present. From his beginnings, with the Bird-Song cycle, he put birds in a cage, he took away not only their freedom to fly but also to sing. In 2010, he focused his photo series on the death row prisoners’ last meal.

Jean-Michel PANCIN chose prison as the subject of his work. The Avignon actual prison in France became the object of his artistic work. Jackie SUMELL created works in collaboration with Herman Joshua Wallace locked up in solitary confinement for now 38 years in Louisiana. This work answers to the simple question " what kind of house a man who lived in a 6x9m box for more than 30 years can dream about? "

VHILS (aka Alexandre FARTO) on his side shows works made of destruction of walls with a jackhammer. The destruction is not an act of vandalism but he tries, by this technique, to redraw the urban archaeology. Nonetheless this act makes him, very often, considered as the “public enemy” .