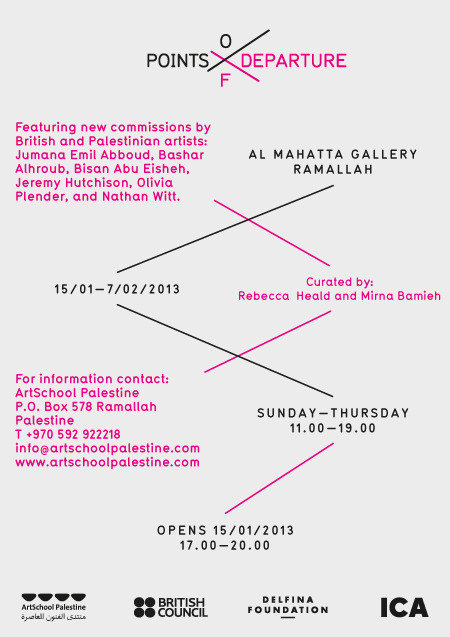 The British Council & ArtSchool Palestine are delighted to announce Points of Departure, a group exhibition and public programme that culminates a year of collaboration with Delfina Foundation, and the Institute of Contemporary Arts (ICA), London.

The first outcomes of Points of Departure will be presented in Ramallah in January and February 2013 before travelling in an expanded form to the ICA, as one of the highlights of the next Shubbak Festival in London, summer 2013.

Points of Departure will feature new commissions resulting from six residencies in London and Ramallah by British and Palestinian artists: Jumana Emil Abboud, Bashar Alhroub, Bisan Abu Eisheh, Jeremy Hutchison, Olivia Plender, and Nathan Witt. Devised with two curators-in-residence, Mirna Bamieh and Rebecca Heald, the works in Points of Departure are a thoughtful exploration of the anthropological concept of liminality. From the Latin word līmen, meaning ‘a threshold’, liminality is a condition in which one’s sense of identity is diffused, leading not only to states of dislocation and disorientation, but also to the possibility of new perspectives. Residencies can also be understood as a ‘liminal’ state between time and place. But what happens when the liminality of the residency is entwined with a place like Palestine, which is defined by its own political ambiguity and contestation?

In the face of globalisation, but without succumbing to false universalism, all Points of Departure artists undertook varieties of research to reveal a range of partial truths. At the ICA, they will be presented in different mediums including performance, video, installation, drawings, and intervention.

Titian’s Noli me tangere is the starting point for Jumana Emil Abboud. Using Anglo-Saxon and Palestinian versions of the fairytale, The Girl without Hands, she creates an installation in which to consider on one level the body and sensations of touch, and on another, the cultural dismemberment that interferes with the development of human beings.

Bashar Alhroub continues his distinctive investigation into the relationship between memory and place. For this project, in video and collage he presents the site of literal residency (the Delfina House) as immensely evocative and personal.

In Welcome to Palestine, Bisan Abu-Eisheh rediscovers his daily routes through the British resident artists’ experience of Palestine; in a “re-mapping” exercise he explores codes and modes of travel and movement, those of a local and those of a foreigner.

Through the manipulation of manufacturing and commercial modes of production, Jeremy Hutchison engages in what he terms “rituals of sense-making”. Collaborating with employees in factories and supermarkets, he designs situations that embrace confusion and propose alternative kinds of logic.

Over the time she spent in Palestine, Olivia Plender was absorbed with questions related to historical narration and the absence of archives and museums in the West Bank. Now, with local actors she is working on a series of game-like improvisation exercises that explore invisibility as a metaphor.

When he started his residency in Ramallah, Nathan Witt set his Google Calendar to include Islamic Hijri, Hebrew Ha’luach and Christian Gregorian calendars. Over the last six months this calendar has been shared, posing questions about existing within three separate religious time zones.

Related research and new knowledge on the theme of liminality will be incorporated into the exhibition catalogue. The exhibition will be also be complemented with a public programme of talks.

Delfina Foundation is an independent, non-profit foundation dedicated to facilitating artistic exchange and developing creative practice through residencies, partnerships and public programming, with a special focus on international collaborations with the greater Middle East & North Africa. In 2013, Delfina Foundation will expand into London’s largest international residency programme, also broadening its geographical remit beyond the Middle East. Along with new commissions at Art Dubai and the Chisenhale Gallery, Points of Departure is one of several off-site partnership-projects during Delfina Foundation’s renovation. www.delfinafoundation.com

ArtSchool Palestine is a non-profit organisation founded in 2005 by a group of art professionals, curators and artists based in Palestine and London. ArtSchool Palestine is committed to the production, facilitation and circulation of artistic practices, and the provision of networking opportunities with the aim of enhancing cultural exchange, educational opportunities and encouraging critical debate. ArtSchool Palestine’s work includes activities from exhibitions, film and video screenings, lectures, performances and publications, to establishing networks and initiating partnerships for reflection, dialogue and exchange. www.artschoolpalestine.com

The British Council is the UK’s international organisation for educational opportunities and cultural relations. It operates in 109 countries to create opportunities for the people of the UK and other countries and to build trust between them. In the Palestinian Territories, the British Council’s work focuses on building stronger ties and greater mutual understanding between Palestinians and the UK, through providing opportunities for engagement between people and organisations in education, English, arts and society projects. www.britishcouncil.org

The ICA, Institute of Contemporary Arts, is a not-for-profit, multi-disciplinary arts centre established in 1947 by a collective of artists, poets and writers to showcase and champion contemporary culture across the broadest range of art forms. Housing two galleries, two cinemas, a theatre, reading room, bookshop and café/bar, the ICA has been at the forefront of cultural experiment since its formation and has presented some of the most radical exhibitions, artists, films, music and thought to have shaped our world. It exists today as a committed proponent of contemporary arts practice and new ideas, presenting an international and contextualised programme of work in new and experimental frameworks across a variety of platforms. www.ica.org.uk

London's Shubbak festival returns for two weeks in 2013 from 22 June to 6 July. Now running every two years, Shubbak (meaning "window" in Arabic) presents outstanding artists and cultural events from across the Arab world. The festival offers audiences the chance to discover and enjoy some of the most exciting voices and practitioners of contemporary Arab culture, in partnership with leading organisations in London and the Arab region.


Biographies of artists and curators:

Jumana Emil Abboud (b.1971) uses drawing, video, performance, objects and text to navigate themes of memory, loss and resilience. Her primary interests lie in storytelling practices and her work consistently reflects a Palestinian cultural landscape in which the struggle for continuity in the wider political context necessitates a constant process of metamorphosis and ingenuity. She has participated in numerous international exhibitions in the last decade, including the Venice Biennial, the Istanbul Biennial, the Bahrain National Museum, the Institut du Monde Arabe (Paris), The Jerusalem Show, Darat al Funun (Amman) and the Carré d’Art (Nimes).

Bashar Alhroub (b. 1978) works in painting, photography, video, installation and mixed media. His work addresses the polemics of a place. He has participated in exhibitions including the Eli and Edythe Broad Museum (Michigan State University, USA); Center for Contemporary Art “Lazania” (Gdansk); Mosaic Rooms at The A. M. Qattan Foundation (London); Green Art Gallery (Dubai); Birzeit Ethnographic and Art Museum (Palestine) and Instants Vidéo Festival (Marseille). Bashar holds an M.F.A. from Winchester School of Art (2010). He lives and works in Ramallah, Palestine.

Mirna Bamieh (b. 1983) is an artist and curator based in Jerusalem. She currently works at Al Hoash Gallery in Jerusalem and is pursuing her M. A. in Fine Arts at Bezalel Academy for Arts and Design in Tel Aviv. Her current artistic and curatorial research interests lie in psychic spaces, the landscape of politics, and the construction of collective memory.

Rebecca Heald (b. 1976) is Director of New Contemporaries, the annual exhibition of new and recent UK fine art graduates. She has previously worked across curatorial and education departments at Sadie Coles HQ, Tate Britain, and the Hayward Gallery. Before working in galleries she was Arts and Features Editor at telegraph.co.uk and has published widely on contemporary art.

Jeremy Hutchison (b. 1979) lives and works in London. He was trained in linguistics and wrote advertising for Coca-Cola. Working across installation, video and sculpture, he designs situations that turn everyday life into manifestations of the absurd. In 2011, he was awarded the Barto dos Santos Award and was subsequently named by The Independent as one of the most interesting artists to graduate last year. His first UK solo show, Erratum, opened in December 2012 at Paradise Row, London. Other recent exhibitions include The Future Can Wait / Saatchi New Sensations (Victoria House, London) and Acoustic Mirrors (176 Gallery / Zabludowicz Collection), and a commission for London's Southbank Centre.

Olivia Plender (b. 1977) lives and works in Berlin. Her research-based practice varies from graphic novels to performance, video and installation. Recent solo exhibitions include Rise Early, Be Industrious (2012) at MK Gallery (Milton Keynes), touring to Arnolfini (Bristol), and CCA (Glasgow); Aadieu Adieu Apa (2009) at Gasworks (London); Information, Education, Entertainment (2007) at Marabouparken (Stockholm) and The Folly of Man Exposed or the World Turned Upside Down (2006) at Frankfurter Kunstverein. Her work has also been shown in the British Art Show 10 (2011) at the Hayward Gallery (London) and touring; Folkestone Triennial (2011); Taipei Biennial (2010); Altermodern: Tate Triennial (2009) and the Bucharest Biennial (2010).

Nathan Witt (b. 1974) is interested in motivations and attributed values. His work manifests in many forms including lists, poems, vignettes, short essays and rants. Recent projects include producing an alternative press release for Haroon Mirza’s solo show at Lisson Gallery (London), a group show In Search of Alchemical Times curated by Cecilia Wee (2011), guest-writing for or-bits.com on “truth” and an artist book commission with [SPACE] Studios.