Jammers. Rauschenberg's protean oeuvre ushered in a new era of postwar American art in the wake of Abstract Expressionism, with a free and experimental approach that drew inspiration from conceptual, materialist, and gestural approaches to art making. 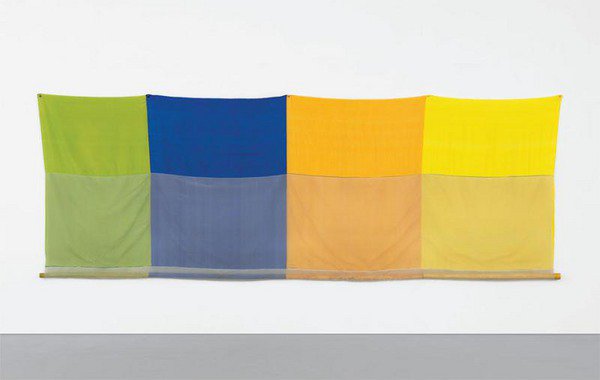 Even though the [Jammers] are still quite romantic, my job was to impose a great amount of restraint upon myself...Nearly everything that I could think to do previously would have violated what these pieces wanted to be. And so with the fabrics, it was another kind of adventure, almost like going out and picking up garbage.
--Robert Rauschenberg

Rauschenberg's protean oeuvre ushered in a new era of postwar American art in the wake of Abstract Expressionism, with a free and experimental approach that drew inspiration from conceptual, materialist, and gestural approaches to art making. His restlessly inventive spirit pushed him to explore a wealth of materials and processes, thus collapsing the distinctions between medium, genre, abstraction and representation, while his invention of the "flatbed picture plane" forever changed the relationship between artist, image, and viewer.

In the early 1970s, Rauschenberg moved his permanent studio from New York City to Captiva Island, off the Gulf coast of Florida (Today, this site is in use as the artists' residency program of the Robert Rauschenberg Foundation). This relocation marked a shift from the gritty urban detritus that had been the basis of much of the earlier work to a rhapsodic embrace of color and geometric abstraction in a wholly new vernacular language. The Jammers series (1975-76), its title a direct reference to the Windjammer sailing vessel, is Rauschenberg's salute to his new island life. In 1975, he also went to India to investigate textiles and papermaking, and the inspiration of this new and exotic context is evident in the use of vivid colors and nuanced textures of cotton, muslin, and silk.

For the most part, the Jammers comprise stitched fabrics in pure, solid colors, affixed to rattan poles or hung directly and loosely on the wall; whereas in works such as Sprout (1975) and Caliper (1976), the unadorned poles are the principal formal element, propped against the wall. Departing from Rauschenberg's densely collaged imagery or muscular, layered materials, the Jammers are simple and light, focusing on the transparency and seductiveness of veil-like fabrics, that are lent sculptural structure by the cloth-covered poles or other found objects. In Quarterhorse (1975), segments of blue, green, tan and yellow cloth evoke sandy beaches, palm trees, and bright sunshine. In Index (1976), widths of gleaming azure and white satin drape together, a diptych of clouds and sea. The hot, saturated hues of Pimiento III (1976) and Mirage (1976) attest to more exotic influences; while Coin (1976) incorporates found tin cans, stripped of their labels, gleaming mysteriously inside a gauze bag that sags under their weight.