The two artists have created a mammoth version of a take-away box with clams and an impressive scenography in which the public can also take part. In the project room The big scene by the Swedish film talent Tova Mozard, which pushes reality's domestic drama to its extreme in the form of a play. 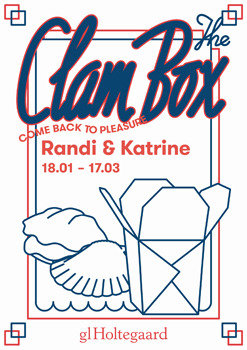 All the world's a stage
This winter, the Danish artist duo Randi & Katrine will be featured at the art gallery Gl Holtegaard with their exhibition The Clam Box – Come back to pleasure. Among other things, the two artists have created a mammoth version of a take-away box with clams, and are going to turn the old baroque villa of Gl Holtegaard into an impressive scenography in which the public can also take part. In the project room, make sure not to miss the highly praised film The big scene by the Swedish film talent Tova Mozard, which pushes reality's domestic drama to its extreme in the form of a play.

Where does reality stop and theatre begin? With this question as an appetiser, Gl Holtegaard invites you this winter to experience some of contemporary art's most exciting names—the artist duo Randi & Katrine (DK) and the film artist Tova Mozard (S).

Since qualifying from the Royal Danish Academy of Fine Arts in 2005, the artist duo Randi & Katrine (Randi Jørgensen, b. 1974 and Katrine Malinovsky, b. 1976) have created a whole series of remarkable installations and sculptures. Their works have childhood motifs and narratives as their point of departure, and they often take the form of entire scenographies that include the public in the narrative.

With The Clam Box, Randi & Katrine link together the everyday and the special, the past and the present in a poetic narrative with the clam as its focal point. The clam is very much an icon of the rococo period and the pictorial world of the 18th century that also gave rise to the country house of Gl Holtegaard. As an image of the feminine and mysterious, the clam has now been updated to present-day everyday culture by the artists in the form of a take-away box of mammoth proportions, lined with thousands of clam shells.

Tova Mozard (b. 1979) is one of the major talents among the young generation of Swedish artists. Her works often have the nature of an autobiography, but at the same time have so many layers of theatre and fiction woven into the narrative that as an audience we are left with the question of the extent to which we are dealing with reality or theatre. In The big scene (2010) the artist has staged her mother and grandmother as actors at Dramaten in Stockholm. Before long, however, the film proves to be a family therapy session, the theme of which is the absence of men.

The director of Gl Holtegaard, Mads Damsbo, says the following: The winter exhibition programme highlights the stage-like nature of the exhibition venue as well as the elements of performance and theatre to be found in everyday life. The two exhibitions bring us to reflect on the relationship between reality and theatre—when we wear masks, and when we are just ourselves. If one looks back at the 18th century, when Gl Holtegaard was built, it was considered positive not to be able to answer such a question unequivocally.