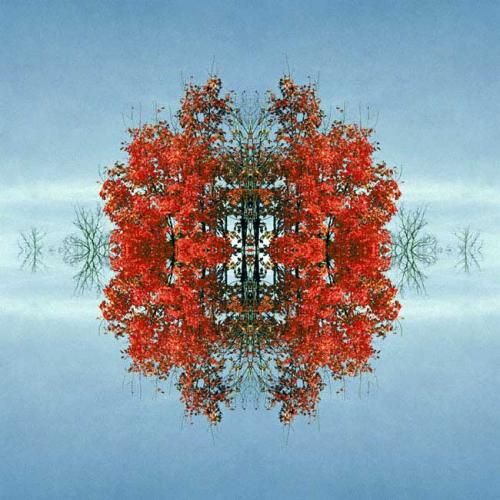 Keith Cottingham's black-and-white images reminiscent of 19th-century photographs (a sprig of leaves Ã  la Fox Talbot's botanical studies, for example) appear as plausible subjects from the past, but are carefully engineered by the artist. Cottingham researches photo archives then uses computer software to create modified versions that teeter between reality and fiction.

While Kim Keever's moody mountain landscapes evoke Romantic portrayals of untamed nature, they begin as staged constructions in the artist's studio. Keever starts by building a model inside an aquarium, adds dyes to the water-filled tank, then captures the results on film as the colors mix and create such effects as sunlight breaking through a dense fog. (Left: Blue Delta, 2002.)

Sterck and Rozo (Katleen Sterck and Terry Rozo) craft an abstract view of nature in their crisply rendered color prints. They take photographs of trees and sky, then cut and paste the images to construct symmetrical designs. The perfectly mirrored forms bring to mind mandalas, those geometric diagrams symbolic of the universe and used as aids for meditation. (Left: Untitled, 2001.)

Water has a meditative quality that both Susan Unterberg and Ray Charles White explore in their respective works. Unterberg's photographs of a lake's reflections look like painterly abstractions when distinctions between land, water, and sky begin to blur. Meanwhile, White's photo-based enamel-on-aluminum images draw attention to water's color patterns and liquid textures that range from droplet-dappled surfaces to frothing ocean waves.

Dirk Westphal documents a sort of domesticated nature in his often humorous photographs of aquarium fish. He shoots different breeds up-close and against white or red backdrops that add a glossy pin-up quality to the otherwise plaintive fish faces. While the artist wryly refers to the series as a scientific classification of organisms, his endeavor is more the mark of an ardent pet owner than an exacting ichthyologist.
___________

James Graham & Sons is pleased to announce the opening of its exhibition of recent watercolors by British artist Tony Foster. WaterMarks: Watercolour Diaries from Swamps to Icebergs, a touring show that originated at the Royal Albert Memorial Museum in Exeter, England, features around 40 works by Foster that depict bodies of water in wilderness areas throughout the United States, South and Central America, Greenland, and England. Artist and adventurer, Foster trekked to these remote destinations to paint on site, often enduring extreme weather and arduous travel to study the various moods and manifestations of water. The exhibition, the artist's second solo show with James Graham & Sons, is accompanied by a 42-page color catalogue.

While Foster has portrayed natural landscapes worldwide for over two decades, he has focused on water subjects in the last five years. For WaterMarks, he traveled by foot, kayak, canoe, and raft to capture such environments as the imposing glaciers in Greenland, erupting geysers in Yellowstone, and the dramatic waterfalls in Guyana. His horizontal compositions-some measuring six feet long-are often accompanied by written journal entries about his experiences, as well as small-scale watercolors of maps and various objects and artifacts, such as rocks, bones, and feathers. 'My work is not simply concerned with describing the landscape,' says Foster, 'but is about traveling slowly, living in wild places, and about encounters with people, objects, flora and fauna.'

A conservationist, Foster wants his work to draw attention to these areas and their need for protection. A portion of the proceeds from the exhibition's sales will go to charitable foundations pertaining to water conservation issues in underdeveloped countries.

Tony Foster was born in 1946 in Lincolnshire, England, and is based in Cornwall. He has been featured in exhibitions at the Yale Center for British Art, the Smithsonian Institution, and the Frye Art Museum in Seattle. His work is in the collections of the Denver Art Museum and the Sierra Nevada Museum of Art, and in many private collections including that of Mr. and Mrs. Paul Mellon. In 2001, the Royal Geographical Society awarded Foster for his artistic portrayal of the world's wilderness.