Contemporary Monument. Since 1999, the 'empty' Northwest plinth in Trafalgar Square, London has been home to some of the world's best contemporary art. This exhibition brings together a wide range of historical material including a display of commissioned maquettes made by some of the most celebrated artists working today. 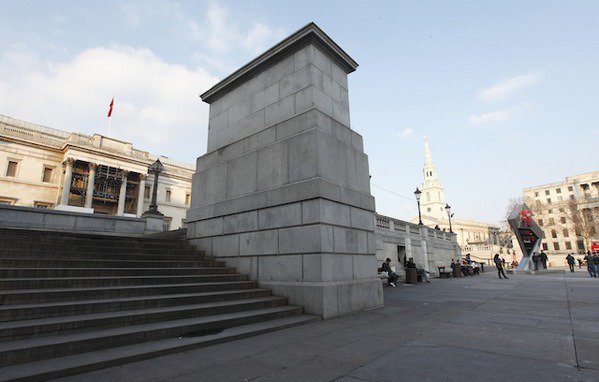 The Mayor of London in partnership with the ICA presents an exhibition surveying the Fourth Plinth, one of the most celebrated art commissions in the world, from 5 December 2012 – 20 January 2013.

The exhibition, Fourth Plinth: Contemporary Monument will bring together a wide range of historical material including the full set of 21 commissioned maquettes made by some of the most celebrated artists working today. The timely review will be a unique opportunity for the public to explore the development of the Fourth Plinth programme, from its inception to its current position as a world class art commission.

The Mayor of London, Boris Johnson said: 'I am immensely proud to support the Fourth Plinth, which has become a must-see cultural attraction for London, one that underpins the capital's status as a great world city for art. Just a few minutes walk away from Trafalgar Square itself, this exhibition promises a fascinating journey through the work of some of the best international artists working today.'

Gregor Muir, ICA Executive Director, said: ‘The ICA is delighted to work in partnership with the Mayor of London to present an extraordinary exhibition of Fourth Plinth proposals in the form of maquettes produced by some of the most important artists of our time. It’s incredibly exciting to be bringing together all these proposals to show in the one space. It’s fascinating to see how artists have responded over the years.’

The empty plinth on the north-west terrace in Trafalgar Square was originally designed for an equestrian statue as part of Sir Charles Barry's design for this now iconic public space. The latest commission, Powerless Structures, Fig. 101 by artist duo Elmgreen & Dragset, marks the eighth sculpture - in a 13 year history of provocative artworks - to be sited on the plinth.

The iconic architecture of Trafalgar Square will be reflected in the ICA exhibition through specially designed stepped display structures and carefully orchestrated sightlines drawn across the gallery. The viewer is invited to examine each maquette individually as well as part of an impressive group.

Fourth Plinth: Contemporary Monument will bring together two important aspects of the programme. The maquettes will form an engaging landscape surrounding a core of specially selected material from the archives housed at the Royal Society for the Arts and the Mayor of London’s offices at City Hall. The archive emphasises the public’s role in the programme and will contain comments from tourists in the square, media clippings, quotes from artists and the thoughts of various high profile Londoners who have been involved in the programme such as Prue Leith, Jon Snow and Sir John Mortimer.

Alan Davey, Chief Executive, Arts Council England, said: ‘The Arts Council is pleased to support the Fourth Plinth Programme, which gives people the opportunity to enjoy great art produced by some of the best artists around today. From the moment the first commission was unveiled, the Fourth Plinth became one of the most talked about public art commissions in the country and this exhibition at the ICA will give people a rare chance to see – in one place – the shortlisted art works that have been considered for the plinth over the past 13 years.’

A programme of live events will explore the role of public art including a round table discussion with selected artists.

In partnership with the Mayor of London