The presentation compares and contrasts two important works from the Museum Collection, created by Cy Twombly and Georg Baselitz. Both are personal narratives that revisit historical figures from two chronologically distant periods, using a language charged with gesturality yet unrelated to the Expressionists. 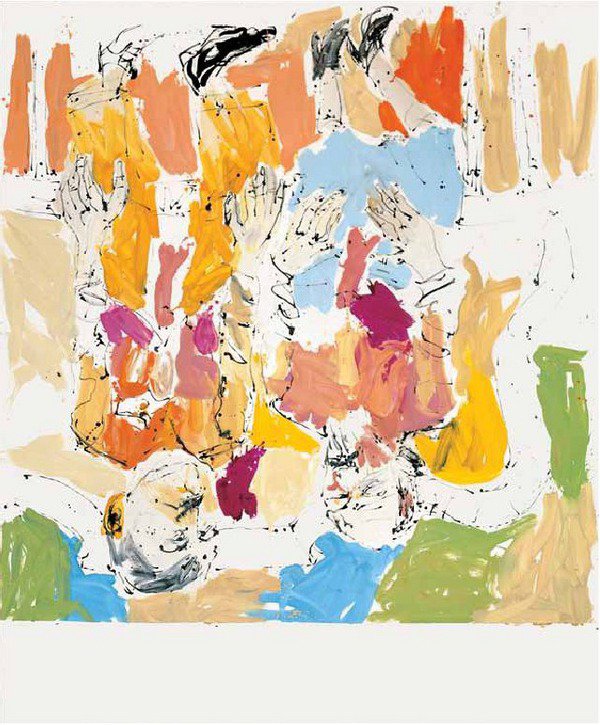 The presentation Stories of History compares and contrasts two important works from the Guggenheim Museum Bilbao Collection, created by Cy Twombly and Georg Baselitz. Both are personal narratives that revisit historical figures from two chronologically distant periods, using a language charged with gesturality yet unrelated to the Expressionisms.

In their praxis, Twombly and Baselitz are not like other contemporary artists who appropriate history in order to introduce new angles or reinterpretations of reality; as José Luis Brea described it, “The world of the latest things, now become image.” Ernst van Alphen also coined the term “new historiography” in reference to the tendency of many contemporary visual artists to modernize or update history and the past by putting inherited reality through a kind of “post-production” process, which means that the artist’s work ends up being that of a historian in the Benjaminian sense of the word. However, Twombly and Baselitz do not do “remakes” of historical events; instead, they present “stories” based on those facts, told from the artist’s point of view, in which their provocations are made within the artistic process rather than on the political stage.

Nine Discourses on Commodus
In the mid-1950s, when Twombly was working as a cryptographer for the U.S. Army, he developed his characteristic style of frenetic lines and stripes with clear ties to the predominant style at the time, Abstract Expressionism. After moving to Rome in 1957, the gestural freedom of Abstract Expressionism was tempered and limited by the weight of history. In the late 1950s and early 1960s Twombly produced a series of works that reveal his deep-seated fascination with the history of Italy and with classical mythology and literature.
Between 1962 and 1963, Cy Twombly’s paintings and historical references took on a much darker, distressing tone. This obvious shift in his oeuvre may have been a reflection of the pessimistic attitude that was prevalent in the early 1960s, haunted by the recent memory of the Cuban missile crisis and the assassination of President John F. Kennedy. In the pictorial series Nine Discourses on Commodus, the artist turned to historical murders for inspiration. Created in the winter of 1963, these nine works are based on the cruelty and madness of the Roman emperor Aurelius Commodus (161–192 AD) and his assassination. Conflict, opposition, and tension dominate the paintings’ composition. Two material spirals form the central core of each canvas, whose emotional content ranges from the most serene, cloud-like structures to bleeding wounds, culminating in a dramatic apotheosis on the final panel. This series exemplifies an angst-ridden yet brilliant stage in Twombly’s career.

Mrs. Lenin and the Nightingale
Mrs. Lenin and the Nightingale, produced by Georg Baselitz in 2008, is a series of sixteen large-format canvases divided into two groups: eight of the works feature colorful brushstrokes on a white ground, and the other eight pieces employ a more subdued palette against a black background. The series is tied together by the repetition of the same compositional structure on each canvas: two inverted male figures, sitting side by side, showing their penises and with their hands resting solemnly on their thighs. The compositional theme was taken from Otto Dix’s famous 1924 portrait The Artist’s Parents II (Die Eltern des Künstlers II). As in many of his works, here Baselitz takes a precedent from art history and reinterprets it as he sees fit—in this case by substituting the figures of two dictators, Vladimir Lenin and Joseph Stalin, for those of the original composition. The former is portrayed as “Mrs. Lenin”, wearing a skirt and high-heeled shoes (a reference to his love of costumes), while the latter, known for his splendid singing voice and interest in poetry, is “the Nightingale.” Here Baselitz is also alluding to a poem by the German writer Johannes R. Becher, in which Stalin is described as a nightingale.

Each of the sixteen paintings has a different title that contains a play on words or enigmatic phrase. None of them explicitly mention the portrayed dictators; rather, they are primarily inspired by Baselitz’s encounters with other artists or by his thoughts and reflections on the work of modern and contemporary creators such as Cecily Brown, Jake and Dinos Chapman, Willem de Kooning, Tracey Emin, Philip Guston, Damien Hirst, Anselm Kiefer, Jeff Koons, and Piet Mondrian, among others.