Bathroom Sink, Etc. Fascinated by the material, metaphorical, and metaphysical properties of artworks, Saban has spent the last ten years exploring the balance between the imagery that art portrays and the objecthood of its forms and mediums. 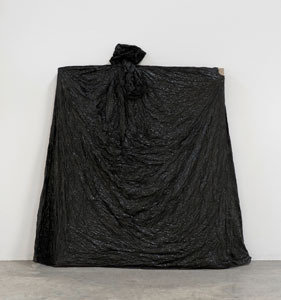 Monika Sprüth and Philomene Magers are pleased to present Bathroom Sink, Etc., the first solo exhibition in Berlin by Los Angeles-based artist Analia Saban. Fascinated by the material, metaphorical, and metaphysical properties of artworks, Saban has spent the last ten years exploring the balance between the imagery that art portrays, and the objecthood of its forms and mediums.

The artist subjects her works to deconstructive processes, pulling apart their layers and reassembling them in unconventional ways, revealing how art exists as both a physical and social construction. In past projects she has unwoven paintings, laser-burned paper and canvas, created paintings that emulate the printing process by using only the CMYK color spectrum, and constructed sculptural objects out of encaustic and acrylic paint. Continuing this exploration, the works on view at Sprüth Magers reflect her latest lines of inquiry, including linkages between art and domestic space, as well as the potential for painting to evoke at once mundane and transcendent qualities.

Bathroom Sink, the exhibition’s eponymous work, is composed of a smooth, gray quartzite slab, from which the artist has excised an oval section, revealing canvas beneath. Saban’s subject stems from the private, hidden moments of everyday life, and its simple geometric form is easy to recognize. Mounted vertically on the wall, however, the work’s commonplace nature is rendered strange, and though Saban uses two traditional materials associated with sculpture and painting — stone and canvas respectively — their combination into one work creates a further conundrum. Familiar and strange, private and public, figurative yet abstracted, Bathroom Sink exemplifies Saban’s interest in the transition that tangible materials undergo as they are shaped into ineffable objects of art.

The artist performs a similar set of operations in Trash Bag with Knot and Stretched Fitted Bed Sheet with Hole. The former — a black sack tied in a knot around a bare linen canvas— is installed on the floor and leans casually against the wall, nearly mistakable for a disused trash bag. The artist has in fact meticulously reproduced the form using a network of molds and coat after coat of acrylic paint; she has done the same to create the white fitted sheet of the latter work, which stretches across its canvas as if covering a mattress.

In Saban’s hands, painting and sculpture collapse into one hybrid medium; and the three-dimensional nature of paintings — always sculptural objects despite their two-dimensional imagery — is made abundantly clear, giving new meaning to the ubiquitous descriptor, “acrylic on canvas.” These two works also represent objects that have experienced wear and tear, presumably from quotidian use within a household. In the case of Stretched Fitted Bed Sheet with Hole, a small hole allows the viewer to see through to the underlying canvas. This puncturing and play with paint recalls the mid-century rips and folds of Lucio Fontana and Piero Manzoni.

Saban’s attraction to common objects, moreover, echoes the Duchampian proposal that any material — however dull or lowly it may be — can be valued as an artwork when placed in a particular context. Where Stretched Fitted Bed Sheet with Hole hints at the corporeal aspects of domestic space, Discharge appears to embody them. Filled with several gallons of acrylic paint, the work’s canvas surface extends outward from the wall in a bulging, belly-like manner. Saban created this effect by pouring the paint onto the back of a stretched canvas, allowing its weight to create a naturally rounded, convex form.

From sheer force of gravity, a few beads of liquid — now solidified into dots of paint — push through the woven linen, recalling the process of perspiration, bleeding, or other bodily functions. A sense of unease governs Discharge, whether this is due to the viewer’s discomfort with the work’s physicality, or whether it is because Saban has effectively turned the standard equation of painting squarely on its head: paint now functions as the work’s support, and canvas provides the painting’s image.

Turning to the larger scale of architecture, Saban has created Claim (from Curtain), a site-specific work that incorporates the large windows in the gallery's upstairs space. Saban stretched a bolt of linen over a modest canvas frame and extended the rest of the oversized fabric across the wall and over part of the windows. The work becomes in effect a curtain —a cheap, quick fix to block out the sun in a too-bright living space. At the same time, Saban's draped curtain performs a dramatic action, calling attention to the art gallery's function as a stage set that is designed to elevate objects to the status of artworks and to present them, literally, in their best light.

Saban’s Slab Foundation #8 also addresses architecture’s spaces and components. As with Bathroom Sink, the work’s surface comprises a weighty slab affixed to canvas, but this time in a substance related more to construction sites than to gallery walls. Saban poured concrete — composed of aggregate, cement, and water — over a framework of wooden struts and bolts. The miniscule particles of sand and stone in the aggregate create “drawings” across the polished concrete surface, and Saban leaves to chance the exact appearance of this natural tracery.

In Slab Foundation #8, Saban explores the value of her materials — here, concrete — which in one moment might serve as the indispensable foundation of a house, but in another might be rendered “useless” when incorporated into a work of art. This applies to the artist’s work as a whole, which continually straddle painting and sculpture, abstraction and figuration, the literal and the metaphorical. Saban's works insist that such dichotomies are always and inextricably entwined.