The exhibition features inspiring and thought-provoking art that has been selected from over 600 international applications. Work by Tristram Aver, Nicola Ellis, Kate Sully and Liz West. 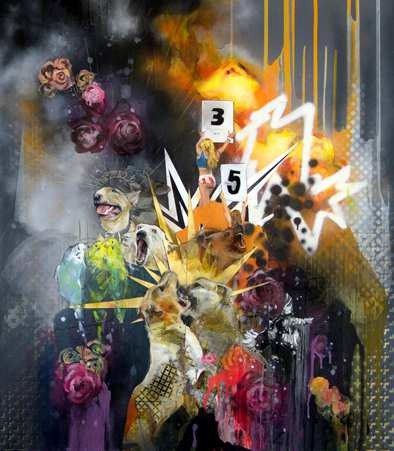 Cornerhouse is pleased to announce FOUR, an exhibition of four new commissions specifically created for the show including work by Tristram Aver, Nicola Ellis, Kate Sully and Liz West.

Curated and developed by Cornerhouse’s Young Curators team, three talented people from the Greater Manchester region, FOUR will feature inspiring and thought-provoking art that has been carefully selected from over 600 international applications.

Cornerhouse’s Creative Stars were hugely successful with their 2012 exhibition Lost is Found, which attracted more than 4,000 visitors. Three of the budding curators from the Creative Stars team recently devised an open call to enable four artists to realise a new work to a budget of £1,000 apiece. Elizabeth Gibson (18), Alex Leigh (17) and Neetu Roy (17) received hundreds of artist applications from all over the world, presenting the team with an exceptionally exciting and challenging task.

Tristram Aver’s commission will generate an altered, condensed view of British contemporary urban living saturated by advertising slogans, technology and the way we view our world via the Internet. His practice examines the volume of visual information we are bombarded with daily in this digital age, sampling common figurative, cultural and commercial iconography and re-analysing their original context and associated meaning with strong reference to 19th century British still life, animal portrait and landscape painting.

When translated to the canvas the forms take on a new momentum, and the process of applying paint becomes paramount to the evolution of the imagery – subject to distortion, repetition, compression and corruption as each layer is applied, resulting in recognisable and chimeric forms that uncomfortably fit in the world.

Nicola Ellis create a large-scale interactive and organic sculpture made from irregular shaped paddlestones that appears to have been plucked right out of nature, provoking close inspection and tempting physical contact. The artist has a keen interest in the synchronisation of the natural with the artificial. Drawing and printing are used to expose aspects of materiality inherent in synthetic materials. Sculptural objects are then produced, combining these material experiences with processes that play with physical control.

The subjects of these objects evolve over time according to the environment in which they are positioned, and the production of other sculpture, drawings and prints that contextualise them within Ellis’ practice. Kate Sully examines the manipulation and exploration of familiar shapes and themes, re-investing them with contemporary issues to tell a new, engaging story.

Often employing a mixed-media approach, the marriage of concept and material culminates in an innovative and challenging collection of work. For FOUR, Sully will develop a series of sculptural mixed-media pieces inspired by the concept of cultivation and growth usually found in a science lab. She’ll use a variety of processes and techniques that fabricate prodigious petri dishes, exploring the notion that we can take elements of our world and reinvent them through our desire to control and manipulate.

Liz West creates sensory experiences in the form of richly saturated installations that immerse the viewer in a kaleidoscopic or optical environment, continually searching and collecting coloured objects ranging throughout the spectrum. Her new work will reference the domestic, presenting a vessel of a second-hand wooden wardrobe allowing the viewer a glimpse through the partially open doors.

Inside, a video work will be mirrored to infinity, creating an immeasurable landscape within the wardrobe, alongside an endless expanse of single-colour objects that will glimmer and entice audiences to look further. The piece will continue the artist’s investigation into the use of physical constructs to experience the viewer’s own emotional and psychological relationships with colour.

Elizabeth Gibson grew up in Wigan and is now a student of French and Spanish at the University of Manchester. Her love for language includes her native English and she has written all her life with published work in her local youth press, UK nationwide magazine Your Cat and on the RSPB’s website. In 2012 she was a reporter for the Manchester Literature Festival.

Gibson is also a keen photographer and filmmaker; in 2011 she was a semi-finalist in her age category in the Veolia Environnement Wildlife Photographer of the Year. Elizabeth is a recipient of the Sixth Form Colleges Forum Student Award for International Understanding, which recognises her linguistic ability and her language-related community work and volunteering. Liz was one of Cornerhouse’s young Creative Stars in 2011 and 2012, and co-curated Lost is Found. She was also on the documentation team for the exhibition, and blogged on the process on the Cornerhouse website.

Alex Leigh is currently studying A level Art, History and Graphics at Thornleigh Sixth Form College. He previously co-curated successful exhibition Lost is Found at Cornerhouse in 2012 and exhibited in Bolton museums open call exhibition 2011-2012. He is looking to study art at university and aspires to work as a full time practising artist.

Neetu Roy is a student at Manchester High School for Girls, juggling Fine Art, Chemistry, Biology and Spanish at A-level. She was a member of the curatorial team for Cornerhouse exhibition Lost is Found (2012). Roy aspires to study Medicine with Spanish at university but hopes to continue practicing art in her spare time. Her work has been exhibited in the Living Edge Arts Festival 2012 and her goal in life is to explore as much of the world as she can and document all which is wonderful and interesting through photography and painting.

Tristram Aver is an artist and curator based in Nottingham, UK. Aver has been involved in a range of activities, including creating album/single cover artwork for The Cooper Temple Clause breakthrough album Kick Up The Fire and Let The Flames Break Loose and producing visuals for BBC projects. Aver has been Chairman and studio holder at OpenHand Open Space Gallery and he is currently a Curator at Nottingham Castle Museum & Art Gallery and studio member of 3 Space Studios, Sherwood.

Kate Sully lives and works in Sheffield, UK and is currently working as a professional artist and facilitator in a range of community and educational settings. After completing a degree in Ceramics and then a MA in Fine Art in Cardiff Sully has developed her practice using a wide range of materials and techniques. The artist employs the use of digitally printed imagery to create large-scale sculptural pieces that mix art form to fabricate colourful, rich and engaging work that often uses familiar forms and objects but reinvests them with new contemporary meaning. Sully has exhibited widely both regionally and nationally and received numerous awards and commissions. She is currently developing ideas for a new collection of work and is applying for a research and development grant from Arts Council England.

Liz West (b.1985) lives and works in Manchester, UK. She graduated from Glasgow School of Art in 2007, with a BA (Hons) degree in Fine Art: Sculpture and Environmental Art. Since then she has exhibited her work both nationally and internationally. Selected group exhibitions include: Stew Gallery, Norwich (2010), Core Gallery, London (2010),The Minerva Gallery, Chichester (2010),The Invisible Dog, New York, (2010), Elevator Gallery, London (2011), Wolstenholme Creative Space, Liverpool (2012),Wiseman Gallery, Oregon (2012) and Untitled BCN, Barcelona (2012). In 2010 West was shortlisted for the Celeste Prize, New York, London Photography Award, London and commissioned to create a new site-specific work for Northern Futures awards, Barnsley. In 2011 she was shortlisted for the Woolgather Art Prize, Leeds and The Title Art Prize, Manchester. In 2012 West was awarded Grants for the Arts funding by Arts Council England towards her first major solo exhibition Chroma.

Cornerhouse is Greater Manchester’s centre for international contemporary visual art and film. A place where all can engage with contemporary ideas through a unique, risk taking, cross art-form and culturally diverse high quality programme of art and film.