Contemporary Polish Art. Rooms are deconstructed, broken up, shifted, turned upside down and twisted around. Bodies are dissected, squeezed, deformed, duplicated and over-wound. Processes are taken to absurd lengths, subverted and "deflected". 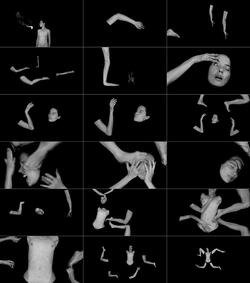 In the exhibition Twisted Entities, rooms are deconstructed, broken up, shifted, turned upside down and twisted around. Bodies are dissected, squeezed, deformed, duplicated and over-wound. Processes are taken to absurd lengths, subverted and "deflected".

The participating artists, representatives of the Polish art scene, which has recently garnered international attention, take a decidedly subversive approach in their works: pursuing and at the same time questioning how processes, spaces and bodies can be (over-)stretched and annulled, distorted and broken, fragmented and reversed, thereby formulating a new view of things.

Twisted Entities: "entity" is a general term for something that exists, including not just objects and subjects, but processes or spaces. "To twist" is a turning, winding or wrapping movement, but can also mean a surprising turn of events, a warping or over-tightening. The sculptures, installations and video works always reflect on the broken rule, the abolished norm or order contained in the action of twisting. Like with Friedrich Nietzsche, in whom a painfully tense physical state led to refined form of observation, a "seeing around the corner" (Ecce Homo, [1889] 1908), so too a twist in perspective offers the participating artists new routes towards a transvaluation of their existence.

The fact that contemporary Polish art is so characterised by this double game of twisting existence, which entails breaching rules and reflecting thereon, may have to do with the sensitive role that country played in the early 1980s in the profound social change in the former East-West relations. On the other hand, the exhibition also illustrates that the participating artists, through their current works, are engaged in a topical discourse on critical contemporaneity.

Accompanying the exhibition will be a catalogue published by Verlag für Moderne Kunst, Nuremberg, containing over 60 colour illustrations, a foreword by Markus Heinzelmann, an introduction to the exhibition by Stefanie Kreuzer and texts by Karol Sienkiewicz and Noemi Smolik.

As of 3 March, in the Works on Paper Galleries of Museum Morsbroich:
Hans Salentin
Collages with Paper and Metal
3 March–25 August 2013