Mind Breath and Beat Drawings. 15 drawings on paper and 11 on canvas, all in black graphite. The show will also include a new series of five etchings and one large painting in ink and graphite on canvas. 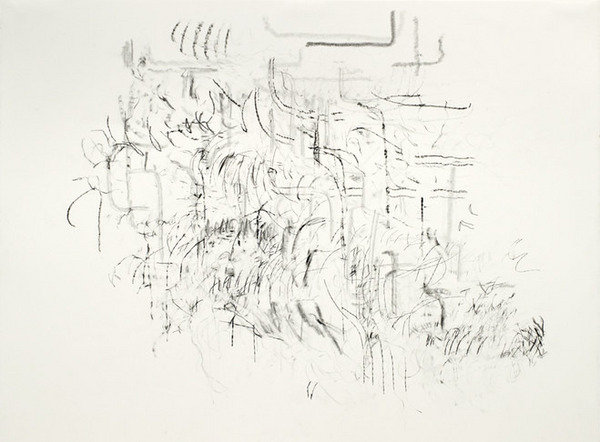 This will be Julie Mehretu’s first solo exhibition in France.

The exhibition will include fifteen drawings on paper and eleven drawings on canvas, all in black graphite on white grounds. The show will also include a new series of five etchings and one large painting in ink and graphite on canvas.

Mind Breath and Beat Drawings allows us to follow a thread in Mehretu’s working process from the intimate and spontaneous lexicon developed on paper as the foundation for larger works on canvas. While Mehretu is perhaps best known for her monumental paintings that combine architectural maps and city plans, bridging abstraction and an investigation of globalization and identity, her practice has in fact been based from its earliest days in a rigorous exploration of drawing.

One of the first departures in making my work was an investigation of who I am as an artist: what are the foundations of what I am interested in; what am I really trying to make work about? It developed into a ‘self-ethnographic’ project for which I began to dissect my lineage and ancestry in an effort to further understand the formation of my own identity.

Together the works in this exhibition reveal a personal and unique language of spontaneous mark making that recalls a range of referents from the automatic drawing and writing of the Surrealists, Henri Michaux’s ‘Mescaline’ drawings as well as Chinese calligraphy.

Mehretu relies equally on erasure, deletion as well as addition, to develop a unique construction on the page that foreshadows the complex spatial dimensions in her large paintings achieved by layering drawn and painted lines in clear acrylic.

I am interested in the potential of ‘psychogeographies’. Which suggests that within an invisible and invented creative space, the individual can tap a resource of self-determination and resistance […] This impulse is a major generating force in my drawing and my larger conceptual project as a painter.

This Paris exhibition follows last summer’s debut of four monumental paintings in Documenta collectively titled Mogamma, an Arabic word which refers to a large government building in Cairo’s Tahrir Square. The building was constructed in a brand of 1940s Modernism found all over the western world that symbolized the centralized government, however the word ‘mogamma ’ also refers to an interfaith site that shares both a mosque, synagogue and a church.

I think architecture reflects the machinations of politics and that’s why I am interested in it as a metaphor for those institutions. I don’t think of architectural language as just a metaphor about space, but about spaces of power, about ideas of power.

Mehretu’s four Documenta works are each constructed through a complex web of ink drawings of the Mogamma building superimposed in layers of clear acrylic, animated by sparse, lyrical lines and shapes in color. The resulting works represent an unparalleled, muscular statement in the recent history of painting.

Julie Mehretu was born in 1970 in Addis Abeba, Ethiopia and raised in Michigan, USA. She studied at Kalamazoo College in Michigan (BA, 1992) and at the Université Cheikh Anta Diop in Dakar, Senegal (1990–91). She received an MFA in painting and printmaking from the Rhode Island School of Design in 1997. Mehretu has participated in numerous international exhibitions and biennials and has received international recognition for her work, including, in 2005, the American Art Award from the Whitney Museum of American Art, New York, and the prestigious MacArthur Fellows award. In 2009 and 2010 Mehretu exhibited a cycle of large paintings at the Deutsche Guggenheim Berlin, which then travelled to the Solomon R. Guggenheim Museum in New York.