Featuring over fifty works from public and private collections, the exhibition spans artist's brief but meteoric career, which ended with his death at the age of twenty-seven. Basquiat's iconography reflects the precocious breadth of his inspirations and preoccupations - from classical poetry to human anatomy, from sport to music, from politics to philosophy, from the arts of Africa to Picasso, de Kooning, and Rauschenberg. 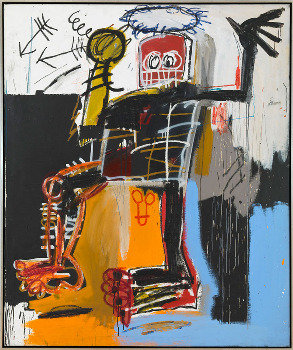 Gagosian Gallery is pleased to announce a major exhibition of works by Jean-Michel Basquiat.

Featuring over fifty works from public and private collections, the exhibition spans Basquiat’s brief but meteoric career, which ended with his death at the age of twenty-seven. Thirty years after Larry Gagosian first presented his work in Los Angeles, twenty years after the first posthumous survey at the Whitney Museum of American Art (1992–93), and eight years after the Brooklyn Museum of Art retrospective (2005), viewers will have a fresh opportunity to consider Basquiat’s central role in his artistic generation as a lightning rod and a bridge between cultures.

Basquiat left his family home in Brooklyn at the age of fifteen and took to the streets. A voracious autodidact, he quickly became a denizen of the explosive and decadent New York underground scene—a noise musician who loved jazz, and a street poet who scrawled his sophisticated aphorisms in Magic Marker across the walls of downtown Manhattan, copyrighting them under the name SAMO. In 1981, he killed off this alter ego and began painting, first on salvaged materials then later on canvas, and making bricolage with materials scavenged from the urban environment. From the outset he worked compulsively. He sold his first painting in 1981, and by 1982, spurred by the Neo-Expressionist art boom, his work was in great demand. In 1985, he was featured on the cover of The New York Times Magazine in connection with an article on the newly exuberant international art market. It was unprecedented for an African-American artist, and for one so young. In that photograph, Basquiat is a vision of cool, sprawled in a chair in front of one of his bold paintings in an elegant three-piece suit and tie, with bunched dreadlocks and bare feet.

Charismatic image aside, Basquiat was a unique and prodigious artistic talent, fusing drawing and painting with history and poetry to produce an artistic language and content that was entirely his own, and which enunciated alternative histories, such as Discography (1982), Brothers Sausage (1983), and Revised Undiscovered Genius of the Mississippi Delta (1983). Combining the tools of graffiti (Magic Marker, spray enamel) with those of fine art (oil and acrylic paint, collage, and oil stick), his best paintings maintain a powerful tension between opposing aesthetic forces—expression and knowledge, control and spontaneity, savagery and wit, urbanity and primitivism—while providing acerbic commentary on the harsher realities of race, culture, and society. In vividly colored canvases, forceful, schematic figures and menacing, masklike faces are inscribed against fields jostling with images, signs, symbols, and words used like brushstrokes. The frenetic, allover quality of many of the large works suggests a drive towards a sort of disjunctive mapping rather than the building of a classically unified composition, where seemingly unrelated marks suddenly coalesce in syncopated rhythms—like the best experimental jazz.

Basquiat’s iconography reflects the precocious breadth of his inspirations and preoccupations—from classical poetry to human anatomy, from sport to music, from politics to philosophy, from the arts of Africa to Picasso, de Kooning, and Rauschenberg. Obnoxious Liberals (1982) and Baby Boom (1982) suggest an angry bohemian’s pet peeves with contemporary mores. There are pictographic crowns, favored by graffiti artists to confer status, and warriors, whose significance is literal—as in the tributes to African American boxing champions Cassius Clay (1982), Jersey Joe (1983) Untitled (Sugar Ray Robinson) (1982)—or metaphorical—as in Warrior (1982) and (Untitled) Julius Caesar on Gold (1981). Cars, cops, street games, and skyscrapers reflect the hustle of the city in With Strings Two (1982), Untitled (L.A. Painting) (1982), and Irony of a Negro Policeman (1981), while Self-Portrait (1984) and The Thinker (1986) are more evidently self-referential and introspective. The skull, a traditional motif of the vanitas, appeared very early in Basquiat’s oeuvre and remained a constant obsession amidst a thick and fast flow of subjects. Consider this when comparing the whimsical Bicycle Man (1984) and Riding with Death (1988), painted just four years later: the man on a bicycle in the earlier painting has been transformed into a naked figure astride a skeletal horse in the later one—a somber, elegiac image with which Basquiat the supernova, buckling under the alienating effects of fame and addiction, ended his career and his life.

For further information please contact the gallery at newyork@gagosian.com or at +1.212.741.1111.