'Arqueologica' revolves around the relationship between archaeological working methods and contemporary art: the show is made up of pieces commissioned specifically to 8 international artists. Los Carpinteros have filled the perimeter of the old cold storage room at Matadero with a huge fire sculpture. Jorge Fuembuena presents 20 photos entitled Portraits. 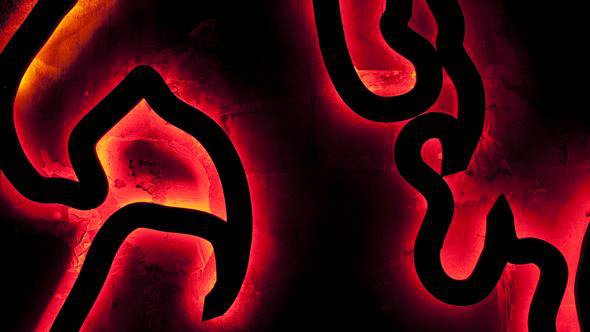 Research into the past provides substantial information to understand the present.

Society, history, religion, politics, urban planning and economy are encompassed by archaeology, where we find vestiges of all things past. The evolution of mankind and the different societies that we have created over time are contained underground, or in plain sight, between reality and fiction. From the oldest excavations to the archival and documentation work of history closer to the present day. Why not include in contemporary archaeology the information leading up to the era of interplanetary exploration? But we don't have to go so far, since an archaeological project might crop up just around the corner, by way of a building project in our city.

The expedition to the site of the ruin, hidden or visible, creates a greatly interesting work mode. The research done prior to exploration, together with the following years' analysis of the objects found, is a long process that seldom has a definite end, since one discovery leads to another in an area like archaeology where historical moments overlap, and new findings, that might occur in other places, always provide complementary information.

Archaeological studies are an indubitable reference for a place's memory, of the people that lived there, of the events that occured at the site that is now a space for review and research.

Within these parameters the contemporary art project-installtions created especially by eight internationally known artists will be displayed in Nave 16 at Matadero Madrid, between January 26, 2013 and May 9, 2013.

From 25 of january to 21 of april
Los Carpinteros
Candela

A candela is an international photometric unit that measures light in space. This is its objective definition, but it has many other meanings in different Spanish-speaking regions, some of which are contradictory. In Cuba it refers to a complicated situation or an astute person. In Spain it is a woman's name. It is also a candle, candlelight, a fire, "the heart of the matter", and even a firefly. Fire also has that ability to change. A physical element creating heat and light, it is associated with moods such as love or rage, and with social ocurrences such as revolts or revolutions. Additionally, its presence affords comfort or harbors danger, depending on the instance.

Cuban artists Los Carpinteros have filled the perimeter of the old cold storage room at Matadero with a huge fire sculpture that references the past of this place: a fire that ocurred in the 90s when the building was abandoned and caught fire due to the negligence of any possible inhabitants.

[It is] a drawing in three dimensions measuring seven hundred thirty-six lineal metres that uses a technique commonly used for political propaganda in Cuba and other regions of America, like, for example, the famous image of Che that for more than two decades presides over the Plaza de la Revolución from the façade of the Ministry of the Interior. For Abierto x Obras this graphic rendering of the hero is transformed into the image of a natural element that is connected, as well, to the history of the place.

Jorge Fuembuena (Zaragoza, 1979) presents a portrait series entitled Portraits in Plaza Matadero, in which he extracts the individual from the collective or the community, handing over to each subject the task of deciding how to depict themselves.

This photo essay of twenty pictures is a personal document of subjects who turn their backs on reality. In this way the artist questions our unique emotional reactions and reflects upon the nature of the social being and the individual.
In the words of the artist, “a portrait is an act of seduction. Photography allows me to relate to others and to the world. That idea of metaphorizing the dichotomy of control and chaos. As a photographer I work with what I know. As an artist I work with what I don't know. I think that the method, the dimension, and the system in which each person works determines their maturity as an author”.

As part of this exhibition, fifty limited edition prints of one of the photographs from the showing will be made; these will be available for sale on the Matadero Madrid website.