Tobias Madison understands his exhibition as the possibility offered by the experimental form of temporal and spatial expansion and intensification fostered by his presence, and as the suspension and reformulation of the classical concept of the exhibition. The work of Uri Aran is pervaded by the interrogation and redefinition of structures and models of communication, the material world and interpersonal relationships. 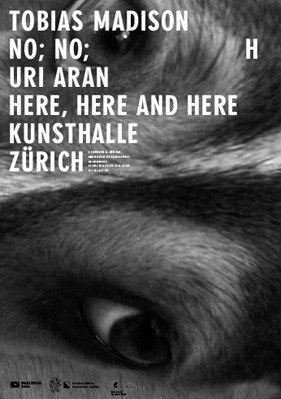 The Swiss artist Tobias Madison (born in Basel in 1985, lives and works in Basel and Zurich) belongs to a generation of young artists who frequently open up the isolated process of artistic creation through the adoption of cooperative or collective strategies, and often assume the role of the curator, client and originator in the process. The roles that Madison adopts are as wide-ranging as the media in which he works: these include sculpture, video, projection, computer-generated and assisted painting, audio pieces, texts, photographs and scans. His works, which are processual in nature, are full of references and descriptions of found symbols and break through the boundaries and categorisations of the art system with playful ease. For the exhibition in Kunsthalle Zürich, Madison works with feedback loops and shifts in both spatial and conceptual exhibition forms and formats, events normally associated with exhibitions, mediation and collaborations.

Madison understands the exhibition in Zürich, his place of residence and work, not as a format limited by space, a presentation that comes to a standstill and end with the opening, but as the possibility offered by the experimental form of temporal and spatial expansion and intensification fostered by his presence, and as the suspension and reformulation of the classical concept of the exhibition. Taking up Madison’s artistic approach involving the occupation, redefinition and operation of spaces – together with other artists he runs the New Jerseyy exhibition space in Basel and the cinema and bookshop AP News in the Wipkingen neighbourhood of Zürich – the exhibition explores the question how the feedback from external practice can be spatially represented in an exhibition, how space and body manifest in physical presence and absence and how existing vessels can be filled in a new way. In keeping with this approach, “NO; NO; H”, the first line of a composition of letters and numbers that acts as a title for the exhibition and features on the front of the invitation, is staged in several locations and in several updated forms: the presentation at Kunsthalle Zürich will be reconfigured at the end of February, with the addition of new works, and reinterpreted. A newsletter not only announces events but also becomes an ephemeral publication, in which a text that is continuously updated by the artist and other content is disseminated and will later be included in the monograph to be published after the exhibition.

Numerous events – e.g. guided tours by Madison’s roommate Michael Zimmermann – establish a spatial and conceptual connection between the exhibition location and other places in Zürich, for example AP News. The collaboration with the associated club project H.O.M.E (HOUSE OF MIXED EMOTIONS) by Mathis Altmann, Lhaga Koondhor and Jan Vorisek extends the exhibition to Longstreet Bar where an intense contemporary club programme takes place and feeds back into the exhibition. The artist Mathis Altmann (born in Munich in 1987, lives and works in Zurich) is developing a series of posters to publicise these club nights. The posters are presented in the entrance area of the exhibition space. Altmann uses layout templates which are freely available online for the posters and deconstructs their different levels and customisable font windows.

In the first phase of the presentation, Kunsthalle Zürich’s lighting is replaced by the video work MELT white-copper (2013). MELT white-copper was created in advance of the exhibition when the Kunsthalle Zürich’s spaces were empty for a short period between the dismantling and assembly of the exhibition installation. The video shows shots of two drones which are fitted with a stabilisation system and follow their separate paths through the empty exhibition spaces. They record the light, the central element that shapes Kunsthalle Zürich’s exhibition spaces. Hence, the document of this basic feature of the exhibitions becomes a work in itself; in tautological and referential way, as video projections it overlays the spatial construction for making exhibitions visible from architecture, light and movement with the experience of the spaces, the viewer’s own body and the work as the bypassing and elimination of concepts and categories. MELT involves the resumption of a light-reproducing work of the same name, which was created at the Art Futures section of the Hong Kong Art Fair in 2012. The work NO (in cooperation with Emanuel Rossetti, 2013), which is expanded and continued here, also originated in this context. In the Far East, one of the hubs of the international fruit trade, cardboard boxes are an object that people use to finance their living expenses by selling them to recycling companies. While on a search for more fruit boxes in Zurich, Madison came across a self-organised economic system: immigrants from India, Thailand, Pakistan, Vietnam, Sri Lanka and Turkey have established a global trade network with family members who remained in the home country – hence family structures become trade routes.

Madison transforms these globally travelled cardboard boxes into individual universes which accommodate an inner life of light structures and objects, surreal, socio-politically activated waste material treated with the generosity of DIY; boxes that operate generously or inscrutably with their illumination; cardboard boxes that are not only self-organised systems but also the transformation and reversal of existential conditions and nothingness captured in a box, the empty space in the space. The work Booby Trap (2013) also circles the theme of the presence of an absence, a non- presence: the outlines of the additional exhibition venues Longstreet Bar and AP News are welded to scale from reinforcement rods and sealed with Hell Bank Money; these overlay the real-existing spaces of the Kunsthalle Zürich as large-format sculptures, as changing structures and conceptual drawings.

Events at the Kunsthalle Zürich and exhibition projects at external venues:

Other events will be announced in the Newsletter designed by Tobias Madison. Registration:
newsletter@kunsthallezurich.ch

Publication:
Tobias Madison’s first artist’s monograph will be published in association with the exhibition at the Kunsthalle Zürich by JRP|Ringier Kunstverlag. It contains numerous images and photos of installations and texts by the artist and other authors.

The work of Uri Aran, who was born in Israel in 1977 and currently lives and works in New York, is pervaded by the interrogation and redefinition of structures and models of communication, the material world and interpersonal relationships. His visually idiosyncratic and disconcerting videos, drawings, assemblages, texts and sculptures hover on the boundary between the familiar and the strange. «here, here and here» is the artist’s first comprehensive solo institutional show and presents work groups created specially for the exhibition which encompass the entire medial range of his oeuvre. Aran brings his works in the Kunsthalle Zürich together in spatial assemblages, thereby creating spheres and systems specific to the individual spaces which, however, also relate to and interweave with each other.

Aran is a storyteller. His narratives revolve around longing, identity, home, the everyday, sentimentality and sadness, and also dislocation and displacement. By superimposing different temporal axes, linguistic structures and material categories, he reconstructs, extends and manipulates the view of what constitutes a story and subverts existing genres and hierarchies.

Aran’s visual idiom ranges from screenplays and elaborately developed films about appropriated and decontextualised images and simple and familiar everyday objects – including, for example, eggs, bottle openers, passport photos and pizza boxes – which he processes, combines and hence unites to form ensembles comprising intimate and simultaneously disconcerting worlds. The materials used have something domestic and comfortable about them but, at the same time, act as indeciperable signposts in the narrative as the meaning of the individual components constantly remains unclear. Why are certain meanings ascribed to certain things? Which questions should be asked? In his works Aran explores the humour, poetics and manipulation of popular objects and triggers feelings associated with them in the viewers while simultaneously prompting them to doubt these objects, their relationships with them and their own experiences.

The new video work Chimpanzee (2013) draws the viewer into conversations involving individuals and couples which are shaped by everyday rituals and intimate experiences, the subjective logic and meaning of which are not completely accessible. We follow dialogues and narratives which appear to describe normal situations but which are equally pervaded by surreality, eeriness and absurdity. The protagonists address the camera but their texts are always directed at and used by an external narrator – perhaps the omniscient narrator of literature, the director or a semantic force that impacts on their experiences. Through the deliberate breaking of the expectation as to how a conversation develops or how one speaks about something, a voiding of syntax arises and draws attention to how the meaning of language is generated by complex processes and shaped by conflicts between individual and collective experience. This realm between the familiar and the obscure is also revealed to the viewer in the further course of the exhibition. In one space, the artist has assembled miniature landscapes in cardboard boxes, which are presented on tables. The next space contains assemblages of objects and sculptures arranged on a wall display that defines the space. At an initial glance, the sculptural installations look like chaotic arrangements of found objects; at a second glance, however, they appear as gestures of a microcosm structured by mysterious rules, which highlight the problem of organisation and categorisation. Collections of images, portraits next to animal pictures, plastic grapes and pizza boxes – the latter evoke the homely feel of a cosy family evening – run like a red thread through the entire exhibition and are also found in the drawings which Aran associates with new printing techniques. Through repetitions and a system of wide-ranging cross-references from a syntax of materials, the artist generates a visual rhythm that runs through the exhibition and is also transposed to the acoustic level with the repetition of the video soundtrack in the final space.

Publication:
Uri Aran’s first artist’s monograph is published in association with the exhibition at the Kunsthalle Zürich by JRP|Ringier Kunstverlag. It contains numerous images and texts by Uri Aran, Fionn Meade and Liam Gillick and a conversation between the artist and Beatrix Ruf.

Further information and images are available on request by telephone +41 44 272 15 15 or email presse@kunsthallezurich.ch.