Balance is the theme of this exhibition, the common denominator of the selected works by the five guest artists: Alejandro Almanza, Primoz Bizjak, Carlos Garaicoa, Andre' Komatsu, Jorge Perianes. 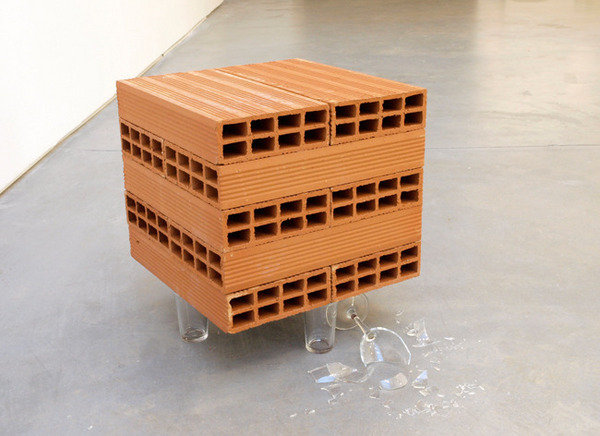 Walk the line leads us through a journey with an unpredictable route and destination. It seems that walking is something that must be done. An action that inevitably involves putting the body in motion. However, "the line" is difficult to define, and if we have to walk it, we will not know very well where it leads us – but it does lead us- and this fact can generate some fear in us.

Walk the Line is therefore something that entails risk, as it involves the body in the course of something not yet planned. The exhibition as a whole reflects upon questions such as bodies, weights, forces, tensions and influences in search of this delicate state, at times unattainable, almost always sought after.

Balance is the theme of this exhibition, the common denominator of the selected works by the five guest artists: Alejandro Almanza (Mexico), Primoz Bizjak (Slovenia), Carlos Garaicoa (Cuba), André Komatsu (Brazil) and Jorge Perianes (Spain), who bring different proposals for this idea and central engine, while each one of them shares a history of having worked with this inspiring subject.

Equilibrium in its multiple meanings: as a compensation of forces working in opposite directions (to achieve unexpected inaction, an extraordinary situation, the surprise of immobility); as a reciprocally motionless situation or stasis between opposites, meaning closer to another which defines it as "just measure”; as harmony or proportion in the distribution of things. But it is also used to name the simple lack of support of something, which, nevertheless, maintains standing.

Some of the pieces that make up the exhibition were already produced, others have been created especially for the occasion, so the exhibit is configured in an unexpected way, making it work with its own balance, and like balance itself, leaving the bodies, weights and different works to exercise their own games of resistance, as a necessary element to enable “talking about other things”.

The curatorial process therefore intends to generate a collective show of authorship, where the experience of the works and the dialogues between them offer the possibility of surprise, (not only to the viewer, but to all those involved in the event) within the limits of the possible, or conceiving the unthinkable.

At this point I can only invite everyone to "walk the line" and enjoy the unpredictable.

Alejandro Almanza (Mexico, 1977) had several solo shows last year: Within the realm of possibility, College of Wooster Art Museum, Wooster, Ohio, USA; Something for nothing, Chert, Berlin, Germany; I did it my way and took the highway, Magnolia Foundation / Rove Gallery, London, UK and he is working on a solo show at the Modern Art Atlantic Centre (CAAM, Canary islands) for 2013. He has participated in several group shows as the 6th VentoSul Biennial, Curitiba, Brazil; II Moscow International Biennale for Young Art, Moscow, Russia, among others. Has received Fellowships and residencies as Bemis Center for Contemporary Arts, Omaha; Harpo Foundation Grant, Los Angeles or Cisneros Fontanals Arts Foundation, Miami, Florida, USA. His work has been highlighted in publications as The Younger than Jesus Artist Directory (Phaidon Press).

Primoz Bizjak (Slovenia, 1976) is a photographer interested in urban spaces, specially its abandoned places or spaces in transition to be abandoned, in capturing that point in which the urban transformation and renewal phases coincide with the aspect of contemporary ruin. He studied Fine Arts at Madrid´s Complutense University and the Academy of Venice , where he graduated in 2004. He has participated in several exhibitions in many European Countries, as the one at Gemini Muse, Museo Navale di Venezia, Italy; Forte Margherai, Mestre, Italy; Photoespaña 2006, and the Venice Biennale (2005 and 2006). In 2010 he was runner-up for the Sovereign European Art Prize, which exhibition took place at the Barbican Centre in London and he received a residency at the Casa de Velazquez of Madrid.

Carlos Garaicoa (Havana, 1967) is one of the more prominent visual artists of his generation.
He develops a dialogue between art and urban space that explores the social structure of our cities through the examination of its architecture. Through an elaborate game of sculptures, drawings, pictures and videos that gravitates between irony and despair, Garaicoa has found a way to criticize the modernist utopian architecture and the collapse of the 20th century ideologies, immersing in the concept of the city as symbolic space that appears in the work of writers such as Jorge Luis Borges and Italo Calvino.
Among his last solo shows it is worth mentioning Noticias Recientes, CAB, Burgos, Spain (2011), or Fin de silencio in Abierto X Obras, at Matadero Madrid, Spain (2010). His work has been shown at great artistic events as Documenta 11, Venice Biennale (2005), VIII Biennial of Havana and the Biennial of Sao Paulo. And belongs to collections such us TATE, London, UK; MoMA, and Guggenheim, in New York, and LACMA in Los Angeles, all in USA; SMAK Museum, Gante, Belgium or MNCARS in Madrid, Spain.

André Komatsu (Sao Paulo, 1978) one of the young Brazilian visual artists with greatest international projection. His artistic proposal develops from an interest in the principle of construction and the use we give to the spaces, rescuing various architectural constructions and buildings in demolition, to then intervene in their fragments, stone, cardboard, concrete or wood waste, and convert them into the raw material for his work, making patent the transformation and social control involved in the construction of the landscape of the city.
Last year he received the CNI-SESI Marcantonio Vilaça Prize of Plastic Arts, Brazil and the Illy Prize in ARCOmadrid, after being invited in 2010 to reside at El Ranchito, in Matadero Madrid, Spain, and in the Bronx Museum of New York in 2009. Worth mentioning his participation in the group show Para ser construidos, included in Modelos para armar. Pensar Latinoamérica desde la Colección MUSAC, León, Spain, in 2010 and in the 8 Mercosul Biennal last year.

Jorge Perianes (Ourense, 1974), lives and works in Vigo, where he studied at its Fine Arts Faculty. His works, (sculptures, fragmented paintings, installations…), show his reflections on Nature, animals, the human being and his environment. As Categorías in Matadero Madrid (Abierto x Obras) last year, an intervention and a poetic exercise that longitudinally divided this singular space, inviting the Viewer to rethink the perception both of the world and of our own thought processes. He resided in Berlin and London in 2008, thanks to the Artistic Creation Abroad Fellowship of the VIII Mostra Unión Fenosa. Among his solo shows: Diálogos, Museo Provincial Lugo, Spain (2011); Los animales se equivocan; MACUF, La Coruña, Spain (2009). He has also taken part in several group shows and art fairs such as ARCOmadrid; VOLTA in Basel and New York; NEXT in Chicago; Artíssima in Turin; ArteLisboa in Portugal.
His work is present in various public and private collections.

As an artist he has participated in Mercosul and Cuenca Biennials (2011) and Cairo Biennial (2010). In 2012 he will participate at Havana Biennial. Among his solo shows in 2011 we must mention La Construcción del Icono, Centro Atlántico de Arte Moderno, Las Palmas de Gran Canaria; and Gran Fachada, at Max Estrella Gallery in Madrid, Spain.

With the collaboration of Elba Benitez Gallery and Vermelho Gallery.