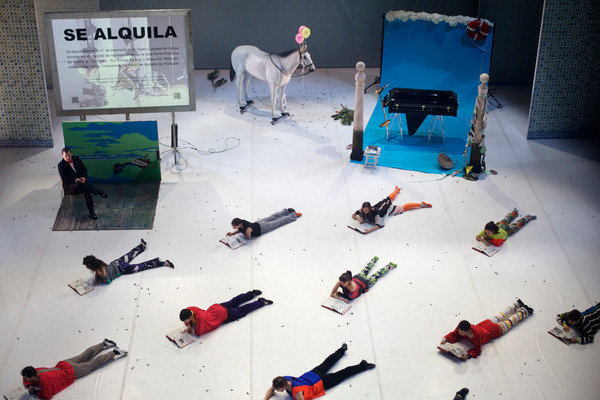 Every year, the exhibition calendar of Fundación Botín opens with this joint exhibition, where the use by the artists of these nine months of intense creativity is assessed, showcasing a faithful view of their latest artistic proposals. A diversity of origins, work places, techniques, and concerns come together at the youngest and freshest offering displayed in the exhibition halls of Fundación Botín.

Juan de Nieves, in the essay for the catalogue accompanying the show, explains “The eight artists featured here test and transcend the limits of sculpture, installation, exhibition design, video and photography. They venture out into a wide range of disciplines that include art history and cultural manifestations, psychology, politics, economics and the social realm, to converge in a multi-faceted work that cannot be reduced to or classified as something either exclusively political or entirely formalist. Nevertheless, their works are rigorous in their formal devices and at the same time somewhat anarchic in their contents. For the most part, their practices are marked by an interest in working with other cultural agents and producers. With a spirit of exploration, they often delve head first into already-existing materials, such as documents on historical figures or references of the cultural identity of specific milieus. Other times, they take measures to revise the pathologies of both present and past”.

Summary of the text by Juan de Nieves for the exhibition catalogue.

Antoni Abad (Lleida, 1956). For more than a decade, he has been working with different groups and communities at risk of social exclusion, using the communication technologies as a fundamental tool for the visibilisation and normalisation of those communities in the globalised world. From an ethical point of view, which Abad openly assumes, these experiences can only take place outside of the sphere of the art market, leading the artist to draw on other structures and channels of distribution that are more in line with his intentions. The dematerialisation process in Abad’s work does not refer to the gradual austerity of his formal mechanisms but rather to the creation of tools of simple use and as a result, the simplification of their presentations as documentary and interactive devices. Here we are referring to the creation of the Megafone software and its website application, which allows for an orderly viewing of the contents processed in each of the artist’s projects.

Through his work " " (126 blank keystrokes, as many as there are empty seats), Karmelo Bermejo (Malaga, Spain, 1979) generates a long process that originated in other similar pieces (Booked and Booked, The Movie). The common denominator among these apparently identical works (the only change being the settings in which the artist intervenes with the same strategy: by purchasing all the tickets to a film screening, the seats on a bus line between Bilbao and Madrid and all the seats on a low-cost flight from Spain to Tunis) must be measured strictly in the most basic terms of consumption, outside of any returns that such transactions might generate. In fact, these pieces bear witness to the workings of an incomplete system: the beneficiary disappears without in any way altering the services offered. In other words, a film and two trips less and barely two hundred perplexed users.

André Guedes (Lisbon, 1971) In the most recent years, André Guedes has taken an interest in the disciplines of the theatre and acting as legitimate vehicles for the artistic practice. Other supports also make their presence in his pieces, such as the sculpture and the object, as well as the document and the photograph, generating an interstitial space that is activated by a dramatised story and by the energetic /performative transmission of documentary records and objects. Prospectus brings to the fore the political dimension of writer, artist, designer and social reformer William Morris, who was highly influential in the British society of the second half of the 19th century. Like other pieces created previously by Guedes, this project is founded on the notion of the historical rewrite and its utility for a critical consideration of the present.

Julia Montilla (Barcelona, 1970) This artist explores the history of the public psychiatric institutions in Spain and undertakes a meticulous review of both scientific literature and the different artistic portrayals of the image of insanity, to produce a body of work – more political than therapeutic – about a traditionally ostracised community in the heart of the post-capitalist societies. Un mundo basado en la evidencia (A World Based on Evidence) is a model of a city built with the empty packaging of the psychoactive drugs consumed by people with psychosis. The piece is designed by the very users of those medications, who become fully aware of their consumption and effects by merely handling them with an aim that is by no means therapeutic. Inherent in this playful act is an obvious critique on the implications of the pharmaceutical industry and its economic interests in perpetuating consumption.

Javier Núñez Gasco (Salamanca, 1971) In his work, the apparent subtlety (sometimes the slightest gestures or movements) of his solutions seems disproportionate in relation to the nature of the procedures that make them possible. It is not in vain that in the last few years the artist has taken up a type of stage production that is relatively uncommon in the art world. In fact, it is the very collaborative structures of the theatre that have been governing much of his work since the middle of this decade. Núñez Gascó has perfect command over the protocols and bureaucracies of the theatre structure, which serve as a base for his intervention or the hacking of “conventional” productions.
His close collaboration with the Teatro Praga in Lisbon, with which he has made different pieces, including the project we are discussing here, Miedo escénico (Stage Fright), involves a journey in two directions, where performative action and theatrical fact crisscross to generate new and thus far unsuspected platforms.

João Onofre. He has created a simple and universal image: a tiny island that floats along slowly, disappearing on the horizon; a drifting refuge for those who disagree with the turn the world has taken. It is the epilogue dreamed by a creator of images, by an artist, a novelist, a philosopher, a film director, or even by a scientist. Ghost is the name of this archetype of paradise; it is an aesthetic and political statement about the world. A spectre that we cling to with our gaze as it gradually flows through civilisation.

Jorge Satorre (México DF, 1979) The starting point for his project, Los negros (El caso de Montereale), is based on the study by historian Carlo Ginzburg, The Cheese and the Worms, a text that exemplifies the historiographical method known as Microhistory. Drawing on the life and beliefs of a mill owner from the region of Friuli in the 16th century, Ginzburg speaks to us of the values, the power and the language of an entire era.
This project is the continuation of a sequence of works conceived out of his interest in the research methods inherent in Microhistory, such as a compilation of indexes and clues as a base for research, the use of the imagination for historical reconstruction and the exhaustive analysis of apparently insignificant details or paths. As is usual in his work, Satorre uses the drawing as the fundamental means for his story.

David Zink Yi (Lima, 1973) This artist uses his work to explore cultural traditions from a horizontal and intimate perspective, both with groups and communities and with specific social and historical situations. Through the video, the photograph and the sculpture, David Zink Yi produces heavily symbolic and customarily recognisable images, which, far from representing idealist visions, act as powerful recordings that probe the cultural realities in which he submerges himself.
His project Sulcán acts as a tale within a tale that in turn resides within other possible tales. The features of an emotional project of this nature do not close themselves off with a set of initial objectives, but rather open up new prospects in the course of development. Zink Yi will be using photography as a diary of sensitive impacts based on both the social milieu around him and his knowledge of the social and political vicissitudes that continue to leave an indelible mark on the region.