Studio Matters + 1. The exhibition opens with 'La strada di sotto', a glowing field of coloured lights of the kind used during street celebrations in Sicily. It continues with a selection of the objects and images that Bartolini has been making while thinking over the past 10 or so years. 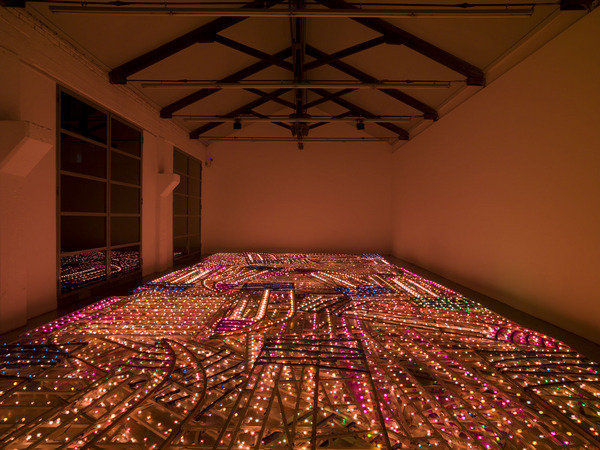 Massimo Bartolini (born 1962, Cecina, Italy) makes immersive, experiential, spatial work. Rather than put work in a space, he tends to make work out of the space itself, modifying it, sometimes subtly, sometimes with maximum impact, to produce sculpture which is activated (sometimes literally, always conceptually) as the viewer occupies it. This exhibition, one of two complementary and overlapping exhibitions of Bartolini’s work (the second is at S.M.A.K, Stedelijk Museum voor Actuele Kunst, Ghent in April 2013), though relatively small in scale and of necessity not representative of every aspect of Bartolini’s work, admits us to the core of his practice, showing one recent large-scale work in the context of a selection of small objects from the artist’s studio, exhibited here for the first time.

The studio matters to Bartolini. ‘I like to stay in the studio’ he says in one of the conversations that shaped the exhibition. In the studio, he makes things on his own, thinking while making, thinking through making, allowing his ideas to be, in his words, ‘upgraded by chance’ while he plays around with materials. He is better known, however, for work made outside the studio, with teams of specialists – by, again in his words, Massimo Bartolini plus at least one other person. This present project turns around two such works, one for each exhibition. In Edinburgh, La strada di sotto, a field of coloured lights of the kind used during street celebrations in Sicily. In Ghent, Organi, an organ made out of scaffolding pipes that plays music by John Cage. These are immersive and experiential installations that transform the spaces in which they are shown, unfolding over time and making and remaking themselves in the presence of the viewer.

There is no model for these two vast sculptures in the group of smaller works that accompanies them. The small sculptures – objects that usually don’t need the help of any ’+1’ for their realisation – are never models or maquettes, have no relation to larger sculptures and will never be scaled up into major public works. They are studioworks, uncertain objects whose status and meaning are in flux. They are containers for thought, or maybe impulses towards thought, objects that the artist has recognised as coinciding formally and conceptually with what he is thinking about: ‘Here in the studio is where I really think. But since I’m not a conceptual artist, I need something to do while I’m thinking ...’

Bartolini’s work is often talked about in terms of metamorphosis and experimentation – work which changes space and our experience of it and which acknowledges, in its finished form, the processes by which it was made. This present decision to look at one major sculpture in the context of a selection of small studioworks seems part of this, and works to draw the viewer further into the magic of Bartolini’s visual appeal.
The exhibition is curated by Dr Fiona Bradley, the Director of The Fruitmarket Gallery, Edinburgh, and Philippe Van Cauteren, Director of S.M.A.K., Ghent, with Massimo Bartolini. It is accompanied by a new publication containing images of all the studioworks and both large installations, and a new conversation between Massimo Bartolini, Fiona Bradley and Philippe Van Cauteren.

New publication
Massimo Bartolini: Studio Matters +1, £20
A new book, published by Roma, Amsterdam, accompanies the exhibition. Featuring a conversation with the artist, and Bartolini’s own, often quirky, descriptions of each of his studioworks, it offers a valuable insight into the magic of his work’s visual appeal.

Limited-edition print £100
Massimo Bartolini has made a limited-edition etching especially for visitors to this exhibition, inspired by one of his studioworks.

The exhibition is organised in collaboration with S.M.A.K, Ghent, who will show the studioworks together with a different installation – Organi (Organs) – in June 2013