The exhibition includes major historical pieces from the mid-to-late 1960s as well as recent works by contemporary artists channeling parallel questionings of the art object, the subversion of its supposed integrity and the geometrical canon's legacy. 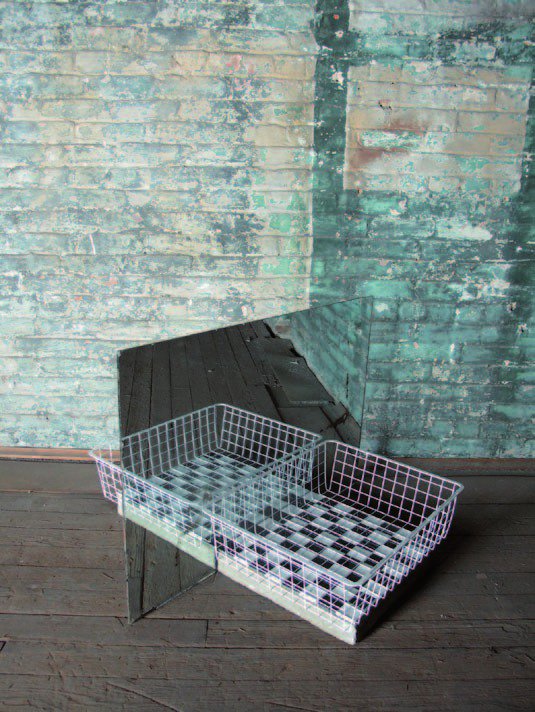 Yvon Lambert is thrilled to present A Stone Left Unturned, a group show curated by Simon Castets. Starting in the early 1970s, Yvon Lambert was the first one to introduce conceptual art and minimal art in France through their main American representatives: Lawrence Weiner in 1970, Sol LeWitt the same year, and Carl Andre and Robert Barry in 1971.

He thereby managed to build bridges between these pioneer artists, whom he still defends with pas- sion today. It is in this precise dynamic that the exhibition establishes itself: not only pursuing the conversation both through contrasts and echoes between these two seminal movements, but also highlighting their present resonance in contemporary art.

More than thirty artworks by almost as many artists will be displayed in the entire space of the gallery, in the tradition of group shows programmed at the Yvon Lambert Gallery.

Borrowing its title from an eponymus piece by Lawrence Weiner, which was first presented at Yvon Lambert in 1970, A Stone Left Unturned presents a selection of works signaling the many overlaps between minimalism and conceptualism.

The exhibition includes major historical pieces from the mid-to-late 1960s as well as recent works by contemporary artists channeling parallel questionings of the art object, the subversion of its supposed integrity and the geometrical canon’s legacy.

Minimalism and conceptualism appear to be polar opposites, with the passage from one to the other being, if not a reaction, the result of art history’s ineluctable progression. While the former insists on the physicality of the art object, the latter asserts the ascendency of idea over form, its execution being “a perfunctory affair.” (Paragraphs on Conceptual Art, Sol LeWitt, Artforum, June 1967.) The art histo- rical narrative presents minimalism as content-averse and conceptualism as refusing formal concerns. The works in A Stone Left Unturned testify to both the more nuanced reality of artistic practices at the time and the continuation of similar interrogations to this day. They connect semiotics to geometry and formal rigor to unique ideas. They bring life to self-contained, dry objects, and give minimal shapes to conceptual enterprises.

In the introduction of her seminal volume Six Years: The Dematerialization of the Art Object from 1966 to 1972 (Berkeley: University of California Press, 1973), Lucy Lippard quotes Dennis Oppenheim, to whom the “displacement of sensory pressures from object to space will prove to be the major contribution of minimalist art.” Oppenheim’s statement could apply to his own work exhibited in A Stone Left Unturned.

While eminently conceptual – a reproduction of tree growth patterns across the USA-Canada border, Annual Rings (1968) continues the minimal trajectory toward art’s open- endedness and signals conceptualism as evolution rather than revolution. Far from being mutually exclusive, formal gratifications and intellectual considerations imbue the history of both minimalism and conceptualism. Their complex intertwinement continues to inform the art of today, where object and idea remain gyrating touchstones.

An e-catalog will be published on the occasion of the exhibition. Preface by Lucy Lippard, interviews with Harold Ancart, Robert Barry and Lawrence Weiner by Simon Castets.

Text by Lucy R. Lippard for the exhibition A Stone Left Unturned
MINICON, or, Out of the Box and into the Ether

Thankfully, this term (Minicon) was never coined. But the silly hybrid occurred to me because I re- call no strict temporal or formal division between Minimalism and Conceptualism in the mid-1960s. The artists creating these two “movements” (none of them particularly liked the terms or even being grouped together) knew each other, often got together, and discussed everything including one another’s work.

Where any one of them fell on the Minimalism-Conceptualism spectrum was not an issue, although each artist certainly had strong opinions about what he or she was doing and how it differed from everyone else. One way or another, they were all thinking “outside of the box,” even if they were making boxes. These artists (many of whom are in this exhibition) were lumped together because their work looked alike, not because it was alike.

In the mid-1960s, working on what eventually became the Primary Structures exhibition curated by Kynaston McShine at the Jewish Museum, I arrived at the word “structures” for work by Judd, LeWitt, Andre, Morris et al. rather than “sculptures” because they were “non-relational,” as Judd declared; composition was predetermined, but not necessarily logical.

(I also called proto-Minimalism “rejective”; Barbara Rose called It “ABC Art.”) I was living with a painter (Robert Ryman) whose white paintings were more like an extreme abstract expressionism than Minimalism, but when he “framed” one of his canvases in waxed paper, pinned (or perhaps taped) on the wall, I was fascinated. Other examples were appearing in aspects of Process Art and Anti-form, which were clearly anti-structural, like much conceptualism. Both of these directions led into various branches of conceptualism.

When far more radical material absences began to show themselves from different directions, John Chandler and I dubbed them “ultra conceptual art,” taking off from LeWitt’s plain old “conceptual” (“with a small c”) which he had coined in 1967 in “Paragraphs on Conceptual Art,” and was to concretize in early 1969 in “Sentences on Conceptual Art” -- which he described as “an operational diagram to generate art. (Some Fluxus artists had previously dubbed their dissimilar work “Concept Art,” and Joseph Kosuth later took credit for the term conceptualism.) Chandler and I saw “idea art” as a movement toward a relatively utopian “dematerialization,” which would de-commodify the art object and float it out into the world. It almost happened.

Like LeWitt, I saw conceptualism as a “massive reassertion of content” opposing the prevailing Greenbergian formalism, but LeWitt’s content was unrelated to humanism. He distinguished between “bottling up” found content and making your own, between Duchampian and anti-Du- champian trajectories. He was clearly of the latter persuasion, but that certainly did not apply to all his peers.

LeWitt and to a lesser extent Carl Andre and Robert Smithson were the bridges between so-called minimalism and so-called conceptualism. Sol’s “non-visual” structures were highly visible, but the conceptual systems that preceded them, laying out the rules for their construction, separated them from previous sculptures, even those by Judd, Morris and Andre which first defined Minimalism. His wall drawings, temporary and also pre-planned, took “idea art” toward flatness and closer to ma- terial absence, as did his fostering of artists’ books.

Andre, on the other hand, adamantly materialist (in the Marxist as well as the literal sense) denied having anything to do with conceptualism, although his “concrete poems” have been included in broad surveys. Andre’s contribution to “demateriali- zation” was his epiphany that sculpture could be flat, horizontal, like a road, paralleling non-object works like Richard Long’s walking pieces, and later forms merely outlined on floors or walls by artists like Ian Wilson or Lawrence Weiner, whose famous 1969 statement (“The artist may construct the piece; the piece may be fabricated; the piece need not be built”) offered a dematerialized outcome as an alternative to a material one.

Robert Barry ultimately achieved total dematerialization with his Inert Gas and Telepathic pieces (though the titles remained tangible). In the meantime, Bruce Nauman was coming out of graduate school and launching his own eccentric path, more akin to Morris’, but unique in its element of verbal/material puns, combining a Duchampian wit with minimalist non- chalance. It is probably his work that sparked that of many of the younger artists in this exhibition. Weiner, Barry and Douglas Huebler all started out as relatively Minimal sculptors, or structurists.

They were among those pondering a conundrum that preoccupied several soon-to-be-conceptua- lists and land artists – was it important to keep adding objects to the world? I was much taken with this idea, because I was already having second thoughts about being a foil in an art world I felt was incestuous and commercial. If there were no objects as such, perhaps art commerce would crumble? And maybe artists would take the place of critics, speaking for themselves? Little did I know at the time that Xeroxed sheets, blurry snapshots, misspelled texts and other shots in the dark (or stones unturned) would eventually be as merchandisable as any other art.

While some critics tried to cut off Minimalism around 1970 with the term Post-Minimalist, I still see a good deal of work that fits the original notions. And I abhor the notion of post-anything. (It’s either what it is or it’s something else...) Whatever Conceptualism was, I have often said that along with feminism, it has been a major influence on my work and my life.

Yet I prefer to keep the term (with a capital C) limited to its heyday– roughly 1966-72, the span covered by the book Six Years... which included the burst of video, performance, “text-based” art, invisible or portable art, and so forth that did indeed change the way art has been made and seen ever since. Today the word “conceptual” (or Post-Conceptual) has become a catchall for anything even vaguely cerebral or ma- terially innovative – practically anything included in the avant-garde. I prefer to see conceptualism as merely part of the DNA of so much impressive newer work, subversively unnameable.