The sprawling installations of the American artist Stephen G. Rhodes combine a variety of media and are based on historical and cultural sources. He creates distinctive restless and elliptical systems in which he addresses issues such as repression and trauma. 'Collection on Display' presents selected works from the collection of the Museum bringing together works by Heidi Bucher, Thea Djordjadze, Berta Fischer, Loredana Sperini and Katja Strunz. 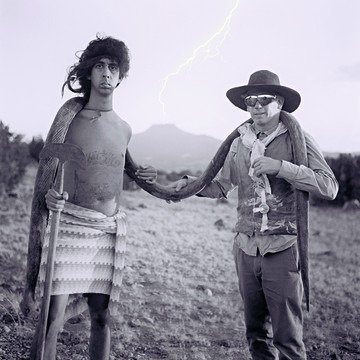 The sprawling installations of the American artist Stephen G. Rhodes (b. Houston, Texas, 1977; lives and works in Berlin and New Orleans) combine a variety of media and are based on historical and cultural sources. Rhodes creates distinctive restless and elliptical sys- tems in which he addresses issues such as repression and trauma. The Migros Museum für Gegenwartskunst presents The Law of the Unknown Neighbor: Inferno Romanticized, the artist’s first solo show at a European art institution.

The visualization of history plays a central role in the work of Stephen G. Rhodes. His use of the “fac- tual” amounts to a critical misappropriation—nothing is ever only about what it is about. For his in- stallation The Law of the Unknown Neighbor: Inferno Romanticized, Rhodes draws on the famous “Lec- ture on Serpent Ritual: A Travel Report” (also known as “Images from the Region of the Pueblo Indians of North America”) Aby Warburg (1866–1929) delivered in 1923 at the Bellevue psychiatric hos- pital in Kreuzlingen, where he was a patient. Warburg examined the serpent ritual of the Hopi in the perspectives of art history, religious studies, and anthropology. His observations pay particular attention to the serpent as a lightning symbol. Generalizing from the serpent as embodying the equivocation of fear and reason, of deathly menace and healing power, Warburg develops the concept of an underlying polarity that, he argues, is discernible in any symbol. But Rhodes is interested in more than just the lecture’s content; he also considers its genesis and the historical context: in the late nineteenth cen- tury—around the time of Warburg’s trip to the American southwest, where he attends the Hopi ser- pent ritual as an observer—the expulsion and genocide of the native American population, which has been going on throughout the nineteenth century, is gradually coming to an end. In 1921, Warburg, suffering from a bipolar disorder, was compelled to repair to the Bellevue sanatorium in Kreuzlingen. The psychiatrist Ludwig Binswanger believed that Warburg’s work on his scholarly endeavors had “therapeutic potential” as part of his stay at the hospital; preparing the lecture, in particular, would be a sort of “healing process.” Rhodes also explores Warburg’s “Library for the Study of Culture,” which had to be relocated from Hamburg to London in 1933—shortly after Warburg’s death—to save the books from the National Socialists. Rhodes’s interest in Warburg is not limited to the reconstruc- tion of dates and facts, but is more comprehensive. The artist explains: “The biographical détournement in this case is the subject of Aby Warburg. It has to be stated, first of all, that the subject I use of course refers to Warburg, but it is a confabulation of the subject and his westward journey reimagined from the sanatorium, and in turn my sanatorium. I am using the elliptical timeline charted out in Warburg’s biography as the underlying grid for my associative drift. There are three events in Warburg’s life that I seize upon to generate a formal structure: the Warburg library and its transference out of Hamburg; Warburg’s American journey and escape to the Southwest; and his return to Binswanger’s Bellevue sanatorium. The elliptical circulation of these events shapes an elusive triangle. They are all formative moments and movements of refuge or transference.”
The Law of the Unknown Neighbor: Inferno Romanticized consists of a labyrinthine arrangement of fur- niture objects such as hospital curtains and the shelves of a library. Rhodes also projects short looped sequences onto walls and curtains—a form of presentation that may be seen as drawing on the tradition of Expanded Cinema. As Rhodes puts it: “In my work, [the loop] extends [...] echoing in some cases onto the two-dimensional works, and of course in the choreography of the narration and citation, the storytelling.” The consequent lack of control and command on the artist’s part also points to the issue of trauma, a central theme in Rhodes’s art. In the artist’s view, it constitutes a form of historiography distinguished by its non-linear character. Last but not least, the expansive installa- tion features flash sculptures that—as the flickering light emphasizes—are a reference to Walter De Maria’s land art installation The Lightning Field (1977): 400 polished steel poles, each around eigh- teen feet long, were arranged on a large piece of land that sees frequent thunderstorms. It is only when a storm draws near and lightning actually strikes the poles that the sculpture is truly activated. As Rhodes laconically notes, “I also think the impotence of The Lightning Field is fun—it’s an allegory for the writing block Warburg as well as I myself suffer.”

Stephen G. Rhodes has presented his art in solo exhibitions at Galerie Isabella Bortolozzi (2012), Berlin, the Hammer Museum, Los Angeles (2010), and elsewhere; in 2009, he contributed to the New Museum Triennial, New York. The exhibition at the Migros Museum will be accompanied by the first monograph about Stephen G. Rhodes; including essays by Raphael Gygax, Brian Price, John David Rhodes, Stephen G. Rhodes, Laurence A. Rickels, and Keston Sutherland, it will be published by JRP|Ringier.
The exhibition is curated by Raphael Gygax (curator, Migros Museum für Gegenwartskunst).

Collection on Display presents selected works from the collection of the Migros Museum für Gegenwartskunst. The first two presentations from the collection to be held in 2013 conti- nue the exhibition cycle on contemporary sculptural praxis launched last year. The works by Heidi Bucher, Thea Djordjadze, Berta Fischer, Loredana Sperini, and Katja Strunz on dis- play in the second chapter of the exhibition examine the status of sculpture and the ways it is perceived, and reflect the history and transformations of sculptural praxis.

In recent years, issues of sculpture have been a major focus of the exhibition programming at the Migros Museum für Gegenwartskunst and the museum’s efforts to enlarge its collection. The three- part presentation of works from the collection brings together works that raise questions concerning the possibilities of sculptural production. As a genre, sculpture—whether figural or abstract—occup- ied a central position in the history of art from the classical age to the modernist era. As the art his- torian Rosalind Krauss has argued, since the onset of postmodernism, the conception of sculpture has been expanded as its boundaries have become blurry—sculpture has quite literally been knocked off its pedestal. Sculptural work has expanded into a variety of media and materials, exploring the possibilities of space. The second chapter unites works distinguished by their critical engagement with different materials and their specific connotations and potentials. The five artists whose works will be on display in this chapter use fragile materials evincing traces of use, but also everyday stap- les and organic matter, exploring their sculptural qualities.

The sculptures of Thea Djordjadze (b. 1971) are fragile arrangements of used objects such as buil- ding materials and articles from the domestic sphere. She also often uses artifacts that carry speci- fic cultural connotations (e.g., carpets). Djordjadze’s sculptural conglomerates form fragments that gesture toward familiar everyday spatial elements or situations and their uses. At the same time, the unfinished and raw surfaces and seemingly temporary arrangements of objects refer to sculptural and architectural forms of classic modernism. Djordjadze usually conceives her works as site-speci- fic, with reference to the local history and culture. The work Ohne Titel (2011), for example, was created for the group show Melanchotopia initiated by the Witte de With, Rotterdam, which was held at exhibition sites scattered all over the city: in existing empty display cases at the Groot Handelsge- bouw, an old trading house built during the postwar boom years, Djordjadze installed various sculp- tures made of painted glass panes that recalled the shapes of pieces of furniture. The sculpture Place of His Disaffection (2011), a plaster-coated piece of foam padding, suggests a mattress. His Vanity Requires No Response was made for the exhibition of the same title at the Contemporary Art Museum, St. Louis. The work’s title quotes a line from the third section of T. S. Eliot’s epic poem The Waste Land.

The works of the artist Katja Strunz (b. 1970) take up an avant-garde legacy, unfolding between a formal constructivism and references to (post)modernist utopias. The principle of assemblage— which is to say, the combination of different forms and materials—sustains a process that coalesces into an overall appearance that may be read as illusionistic as well as abstract. The work Rheingold (1998/2008) consists of an old rowboat that has disintegrated into fragments and stranded on an abstract glass construction reminiscent of a lake. The simple formal vocabulary used to suggest an abstraction of a landscape with boat evokes metaphorical and poetic images. Strunz pursues a romanticized idea of land art as proposed by Robert Smithson’s sketches for crystalline and utopian architectures, while the title, citing an opera by Richard Wagner, also gestures toward the spirit of a mythical German romanticism.

The works of Loredana Sperini (b. 1970) similarly suggest associations of mythologies by staging encounters between abstract and organic-figurative formal vocabularies. Arranged on a mirrored surface is a stacked heap of branches, some of their ends coated in wax. Amid the dry wood, the beholder espies casts of hands in colored wax. A recurrent central feature of Sperini’s art is experi- mentation with different techniques and materials. The visual cosmos of the sculptural installation, heightened by the contrasts between materials and forms, is paradigmatic of her oeuvre. She deve- lops this cosmos in various media and employing highly time-consuming traditional manual tech- niques that always also render forms of temporality visible. The artist came to renown primarily with her kaleidoscopic web-like embroideries. In her more recent works, Sperini translates this abstract- surreal and yet figurative visual language into wax and concrete reliefs and three-dimensional works in space.

Berta Fischer’s (b. 1973) works examine questions of abstraction vis-à-vis a classic figurative motif. By using fragile materials and delicate structures, Fischer explores the potential of formal creation while calling its permanence in question. For years, the artist worked primarily in plexiglass and other industrially prefabricated materials such as nylon threads and plastic foils. Fischer’s sculptures may be read as a response to the rigid minimalism of the 1960s and 1970s, an art based on industrial materials and dominated by emphatically male artists. Her sculptures made of neon-colored acrylic glass address the transparency and fragility of this material, which is heightened by the incidence of light. In the style of an “écriture automatique,” an unchecked stream of consciousness as envisioned by the historic Surrealists, these fragile structures whirr through space and leave behind a frozen image.

The artist Heidi Bucher (1926–1993) came to be known in the 1970s and 1980s for her latex skinnings of architectures in space. No less central to her art is the engagement with the analogy between clo- thes and the house as media of mental and historical remnants, as “vestments” that have the poten- tial to preserve the psychological traces of wearers or residents. The cycle of works entitled Body Shells (1972–1973) exemplifies the early period in the Swiss artist’s oeuvre. Working in Los Angeles in collaboration with her then husband, Carl Bucher, she created sculptures out of foam material whose outsides she daubed with mother-of-pearl, a material to which the artist would return again later on. They are portable pieces that recall organic materials or strange sea creatures while also being inspired by the futuristic fashion of the era. With her family, she staged a performance on the beach at Venice Beach on which the film on display in the exhibition is based. The show also fea- tures sketches with details executed in mother-of-pearl, preparatory works that document the deve- lopment of the sculptures, as well as a set of latex objects.