Masterpieces of Ice Age sculpture, ceramics, drawing and personal ornaments from across Europe. Exceptional pieces are presented alongside modern works by Henry Moore, Mondrian and Matisse, illustrating the fundamental human desire to communicate and make art as a way of understanding ourselves and our place in the world. "In search of Classical Greece" look at the country through the eyes of the classical scholar Edward Dodwell and his Italian artist, Simone Pomardi. During their travels in 1805-6, they recorded the country and its people in a series of fascinating and spectacular drawings and watercolours. 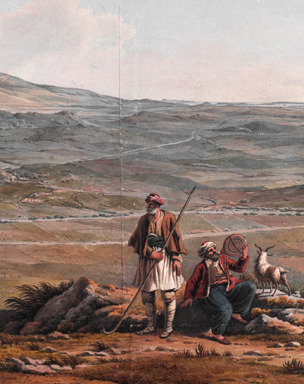 ‘All art is the product of the remarkable structure and organisation of the modern brain. By looking at the oldest European sculptures and drawings we are looking at the deep history of how our brains began to store, transform and communicate ideas as visual images. The exhibition will show that we can recognize and appreciate these images. Even if their messages and intentions are lost to us the skill and artistry will still astonish the viewer.’

Through archaeological evidence from Southern Africa, we can ascertain that the modern brain emerged just over 100,000 years ago with the appearance of art and complex behavior patterns. This exhibition will demonstrate how the creators of the work on display had brains that had the capacity to express themselves symbolically through art and music.

The opening section of the exhibition will establish the period of the last Ice Age, concentrating on how 40,000 years ago fully modern humans spread into Europe from Africa. New stimuli such as encounters with the indigenous population of Neanderthal people and the rigors of the cold climate at this time enabled their imaginations to flourish; this resulted in the production of remarkable works of art, such as the famous painted caves in as Chauvet, Lascaux and Altamira, as well as lesser known pieces made from stone, bone, antler and ivory.

Figurative art appeared for the first time in human history in Europe at this time, and the second section of the exhibition will be dedicated to some of the oldest figurative paintings and sculptures. One of the most beautiful pieces in the exhibition includes a 23,000 year old mammoth ivory sculpture of an ‘abstract’ figure from Lespugue, France. Picasso was so fascinated with this ‘cubist’ piece that he kept two copies of it. This figure demonstrates a visual brain capable of abstraction, the essential quality needed to acquire and manipulate knowledge which underpins our ability to analyse what we see.

Figurative art appeared for the first time in human history in Europe at this time, and the second section of the exhibition will be dedicated to some of the oldest figurative paintings and sculptures. One of the most beautiful pieces in the exhibition includes a 23,000 year old mammoth ivory sculpture of an ‘abstract’ figure from Lespugue, France. Picasso was so fascinated with this ‘cubist’ piece that he kept two copies of it. This figure demonstrates a visual brain capable of abstraction, the essential quality needed to acquire and manipulate knowledge which underpins our ability to analyse what we see.

Ideas of creativity and expression have remained remarkably similar across thousands of years. The final section of the exhibition will attempt to lift the time barrier so we can see these objects as the earliest expression of European art history and discover new ways of appreciating them. Works by major modern artists including Picasso, Henry Moore and Matisse will be included to establish these connections across time, highlighting the fundamental human desire to create works of great beauty. This can be appreciated in a striking drawing of two deer engraved on a piece of bone found in the cave of Le Chaffaud, Vienne, France.

Just as a modern artist would decide on the colour, size and texture of the paper, wood, lino or glass to use for best effect, the Ice Age artist selected a piece of bone for the drawing. The deer are well composed within the space and positioned with considered perspective so that they appear to be standing side by side with one slightly behind the other. It was not a sketch for another larger work, it was meant to be viewed in its own right like any modern drawing. The medium may be different but the creative brain which produced it is the same. The drawings, sculpture and decorated hunting equipment in the show will reveal the natural world of people, from Britain in the west to Siberia in east. They also display a variety of ways of encapsulating movement which are the precursors of modern animation and cinema. This theme is further explored in an installation bringing the extraordinary artistry of the great painted caves such as Chauvet, Lascaux and Altamira into the museum, to provide a feel for the surreal experience of viewing paintings deep underground in the flickering light of burning torches and fat lamps.

An accompanying publication is available by British Museum Press: Ice Age art: arrival of the modern mind by Jill Cook

A full public programme of lectures, workshops and events will run concurrent with the exhibition.

This exhibition will look at Greece through the eyes of the classical scholar Edward Dodwell (about 1777–1832) and his Italian artist, Simone Pomardi (1757-1830). During their travels in 1805-6, they recorded the country and its people in a series of fascinating and spectacular drawings and watercolours. Kindly lent by the Packard Humanities Institute, these works have never been seen in public before. They represent a unique record of an important chapter in the rediscovery of ancient Greece on the eve of the creation of the modern Greek state.

Their landscapes, often featuring the ruins of classical sites, are peopled with modern Greeks and Turks at a time when Greece was under Ottoman rule. Especially fascinating and impressive are five rare surviving panoramas, measuring up to four metres in length, and providing 360 degree views of Corfu harbour, the Acropolis and of Athens and its surrounding countryside.

Dodwell and Pomardi’s travels were part of a great surge of interest in Greece at a time when Napoleon’s military occupation of Rome in 1796 had brought the age of the European Grand Tour to a sudden end. This exhibition will set Dodwell and Pomardi in the tradition of travel in Greece in the age of Enlightenment, examining the motivation and circumstance of such travel as well as its cultural consequences. It will be accompanied by a related display of drawings from the British Museum’s permanent collection exploring the theme of travel in Greece in the Ottoman era and just after the War of Independence.

Throughout the eighteenth century, generations of young men from Europe’s leading families had gone to Italy to complete an education that had comprised, in large part, the learning of Latin and Greek. Rome, Florence and Venice were the cities most visited and for the intrepid traveller there was also Naples. This was the principal city of southern Italy and the stopping-off point for viewing the newly discovered towns of Pompeii and Herculaneum, buried in the eruption of Mt Vesuvius in AD 79. When the occupation of Italy prevented Grand Tourists from visiting Italy, Dodwell and Pomardi, like many travellers, chose to go beyond the established Mediterranean regions of the Grand Tour. The understanding these travellers brought to the archaeological remains of ancient Greece encouraged the taste among British Hellenists for Greek architecture. This gave new vigour to the Greek Revival, already begun in the middle of the 18th century by the expeditions of the Society of Dilettanti. Hellenism, the love of ancient Greece, was to promote a new movement of Philhellenism, a sympathy for modern Greek people and a desire to realise the dream, as Byron put it, ‘that Greece might still be free.’

The beauty of its landscape and romance of its classical ruins were the primary reasons for travel to Greece under Ottoman rule. By the first decade of the nineteenth century a sympathy for the Greek-speaking peoples inspired European travellers to call for independence from Ottoman rule. In the years following the Greek War of Independence, many of the monuments recorded by Dodwell and his companions would change considerably as the new nation swept away the accretions of the late Roman, Christian and Ottoman eras and attempted to restore the purity of the classical remains. With hindsight these removals are controversial and they feed into a larger on-going debate around the creation of and the competing identities of modern Greece.

Dodwell was a talented amateur who signed many of the watercolours and drawings, even though some of them he worked on with Pomardi; others were Pomardi’s own work. Many of them were engraved in Dodwell’s own published accounts of his travels in 1819 A Classical and Topographical Tour Through Greece, During the Years 1801, 1805, and 1806. A few drawings exist in other collections, but the majority, over 800 in total, remained in the possession of Dodwell’s Irish descendants until they were purchased in 2002 by David Packard for the Packard Humanities Institute in Los Altos, California. He was advised by the distinguished American archaeologist John Camp, who has carefully catalogued the collection and made a representative selection of 67 works for the display here. He is the guest curator of this exhibition and the principal author of the accompanying publication which contains additional essays by the British Museum curators Ian Jenkins and Kim Sloan, and by Fani-Maria Tsigakou, Curator of Paintings, Prints and Drawings at the Benaki Museum, Athens.

Supported by The Packard Humanities Institute

For further information please contact the Press Office on 020 7323 8583 / 8394 or communications@britishmuseum.org