Documents are flat 4. For this exhibition the artist combines the two spatial installations. Theatre displays of a fragmented Modernism merge into an amalgam of synaesthetic stimuli. The materials used are plywood panels, paper, metal and plexiglass, as well as the cables of beamers, lamps and loudspeakers. 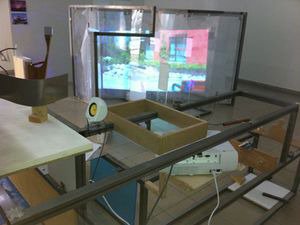 Social themes, albeit taking place on a fictitious level, in Neïl Beloufa's spatial scenarios combine into Western and Third World science fiction theatre, as it were. They confront us with irritating spatial interventions that enable a multi-dimensional perception by way of wall elements, pierced glass panels, and video projections, as well as detailed assemblages and collages. Theatre displays of a fragmented Modernism merge into an amalgam of synaesthetic stimuli. The materials used are plywood panels, paper, metal and plexiglass, as well as the cables of beamers, lamps and loudspeakers.

At the heart of these fragmentary settings, we often find a video which deals with social communities and their codes. Mysterious and scurrilous social concepts or, as in the latest film, "futuristic animism" (people's passion, lifestyle, beautiful wine, gigantic glass towers, all surrounded by water) transform the exhibition room into a visionary scenario that, in dystopian fashion, found expression even in the artist's first marvellous video "Kempinski" (2007), in which Malians talk about their visions for the future. In his current exhibition, entitled "Les inoubliables prises d’autonomie" (The unforgettable assumptions of autonomy), Beloufa, in an architectural stage setting the visitor has to pass through, has assembled three videos in which the guiding themes of power, money and love are corrupted in a grotesque manner.

At the Kunstraum Innsbruck, Beloufa combines the two spatial installations "Documents are flat" (2010) and "Intense Proximity" (Paris Triennale, 2012) into a single installation at the heart of which stands the video film "Untitled" (2010). The latter is based on a true event. Terrorists are supposed to have been staying at an Algerian country house. The owner, just returned, the gardener and neighbours talk about their observations inside and around the house which, with its veranda and windows, opens on a subtropical scenery. The squatters have been living, eating and sleeping here for three whole years without leaving any traces. We sense the threat hanging in the air. Everything here is flat backdrop, as in the painted interiors of African portrait photography − the closets, the windows and doors. Even the garden consists of nothing but an illusionist photo wall, according to the verse of William S. Burroughs: "The sky is thin as paper here ..." So, what is authentic here? The fictitious and mysterious components of the witness reports not only inform the narrative collage, they also pervade the innumerable parts making up the installation, turning it into a fragmentary mosaic of a multicultural world that ultimately is beyond our understanding.

At the moment Neïl Beloufa is in Palais de Tokyo (Paris) with the exhibition Les inoubliables prises d´autonomie.

The opening of this Exhibition will take place on Saturday 10. November at 12:30 within the Premierentage 2012
www.premierentage.at