China Blue is an artist who captures the tenor of our times by transforming common electronic waste into biomimetic artwork with an environmental focus that also sings. Gary Pennock experiments with the intrinsic properties of phenomena and materials to form an aesthetic experience. Sujin Lee works with text, video and performance, exploring the way in which different cultural and linguistic systems affect the actions of language. 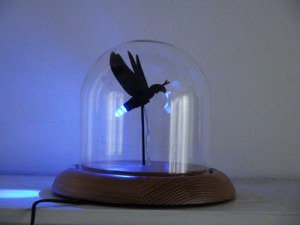 China Blue is an artist who captures the tenor of our times by transforming common electronic waste into biomimetic artwork with an environmental focus that also sings. In Firefly Tree, one of her works shown at AC Institute, she translates the firefly’s rhythmic signaling pattern into sound (the Firefly Chorus) and light (blinking LEDs). Today fireflies are threatened due to habitat encroachment and light pollution, making memories of fireflies more precious as the illumination of the cities and towns overwhelm their delicate mating light show.
The rhythmic pattern of the firefly calls is a significant component of the Firefly Tree. This pattern is featured by the data sonification of the Firefly Chorusand the data visualization controlling the LED’s blinking rate. This dual reference underscores the biomimetic nature of the work both visually and acoustically while providing an original and imaginative way of simultaneously injecting both form and content.
Firefly Tree was Nominated 2012 Best Monographic Museum Show, Nationally by the International Association of Art Critics, and Awarded 2012 Rhode Island State Council on the Arts Fellowship in New Genres. The work was also reviewed by Ed Rubin in Sculpture Magazine‘s November 2012 issue.

BIO: China Blue is a two time NASA/RI Space Grant recipient a RISCA Fellowship, New Genres recipient and an internationally exhibiting artist who was the first person to record the Eiffel Tower in Paris, France and NASA’s Vertical Gun in Moffitt Field, CA. She represented the US at OPEN XI, Venice, Italy an exhibition held in conjunction with the Architecture Biennale. Reviews of her work have been published in the New York Times, Art in America, Art Forum, artCritical and Sculpture magazine to name a few. She has been interviewed by France 3 (TV), for the film “Com-mu-nity” produced by the Architecture Institute of America and was the featured artist for the 2006 annual meeting of the Acoustic Society of America. She has been an invited speaker at Harvard, Yale, MIT, Berkelee School of Music, Reed College and Brown University and an adjunct professor and Fellow at Brown University. She is the Founder and Executive Director of TheEngine Institute, Inc. (www.theengineinstitute.org) a non-profit dedicated to promoting the nexus of art, science and technology.

Gary Pennock experiments with the intrinsic properties of phenomena and materials to form an aesthetic experience. He attempts to capture the imagination with poetic presentations of Meta themes such as time, nature and mortality that often function at the threshold of perceptual awareness. Attuning time based compositions to our visual and aural apparatus allows him to transform our engagement with screen-based technologies, into potentially therapeutic events that wash across the senses. Pennock’s installation at the AC Institute is arranged in a darkened space through which the viewer is led into intimate encounters with seven works whose immersive viewpoints encompass the body in a ritualistic experience of time. Technology and the natural world form a symbiotic relationship mediated by the human body. Pennock’s sensory environments, be it projected light dancing on flowing fabric in Horizon in the Fold, or the auditory and visual A Line Through the Center of Space, and the sifting sands of Erode give voice to materials and phenomena that evoke meaningful connections with our sensing systems. The artist focuses on the audience synthesizing minimal elements into their own universe, striving for a balance between subjective and objective. He aims to operate at the boundaries of reality and illusion, thought and emotion.

BIO:
Gary Pennock (born 1978) graduated from the University of Washington’s Digital Arts & Experimental Media program with a BFA in 2008. In 2010, he earned an MFA in Art & Technology Studies at The School of the Art Institute of Chicago. He has exhibited video and works of light from coast to coast in a variety of formats. Gary currently lives in New York.

Sujin Lee
This is a story for small children. a true-life love story

I work with text, video and performance, exploring the way in which different cultural and linguistic systems affect the actions of language. My experience of moving to the U.S. from Korea and learning English as an adult has shaped my artistic work—I am fascinated by the physical act of speaking. In my work I translate spoken words into text and vice versa, and explore the resulting disjunctures that uncover basic imperfections of language. I am interested in the elements that spoken words hold – accents, durations, emotions, hesitations, and mistakes – as well as how to present those elements in different written forms. I often use dubbing and subtitles, juxtaposing spoken and written words to explore the notion of “perfect” speech, the relationship between sound and image, and the ownership of language.

This is a story for small children. a true-life love story has three main elements: English text, Korean voice-over and images. The written text is from the example sentences in English dictionaries and grammar books. I always find those examples fascinating as they display random, surprising and poetic qualities. Their fragmentary aspects also refer to the possibilities of varied narrative context. Subtitles typically function as a translation of the spoken (original) text in films. However, the English text in this piece is the original and the spoken text (voice-over) is a translation. There are two kinds of translation: a translation from one language to another and from written text to spoken text. The B&W images were created as responses to both the English and Korean text. The three elements had equal weights in terms of creating rhythms in editing process.
–Sujin Lee

BIO: Sujin Lee has exhibited at the Bronx Museum of the Art, Aljira: Contemporary Art Center, ArtStays International Contemporary Art Festival 9, Jamaica Center for Arts and Learning, The Soap Factory, The 3rd Off and Free International Film Festival, and NURTUREart. Lee has been awarded residencies from the Sidney Kahn Summer Institute at The Kitchen, Millay Colony of the Arts, Blue Mountain Center and I-Park. She is currently an A.I.R. Gallery fellow and is participating in the Artist-in-Residence program at Newark Museum in January-February, 2013.