Rise and Fall of Apartheid

Photography and the Bureaucracy of Everyday Life. Featuring more than 600 documentary photographs, artworks, films, newsreel footage, books, magazines, and assorted archival documents, the exhibition offers an absorbing exploration of one of the twentieth century's most contentious historical eras. 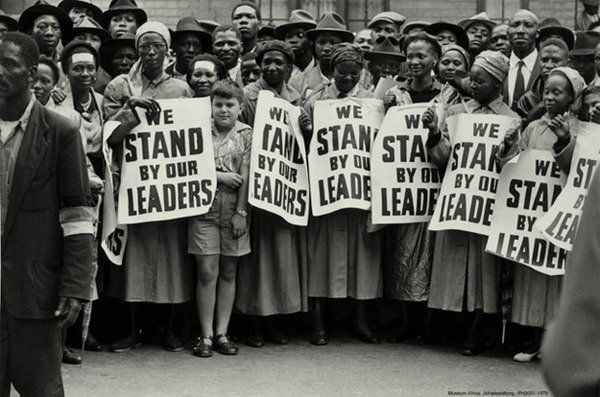 Haus der Kunst is pleased to announce Rise and Fall of Apartheid: Photography and the Bureaucracy of Everyday Life, a historical exhibition that presents one of the most comprehensive explorations of the legacy and impact of apartheid on the political, social, and cultural life of South Africa. Curated by Okwui Enwezor with Rory Bester, and organized by the International Center of Photography, New York, this critically acclaimed and award-winning exhibition explores the role played by photography and art in recording, documenting, and elucidating the dramatic events that shaped the struggle against apartheid.

Complex, vivid, and evocative, and covering more than fifty years of this pivotal period in South Africa, these visual records reveal the procedures and processes of the apartheid state from its beginning in 1948 to the first non-racial democratic elections in 1994. Featuring more than 600 documentary photographs, artworks, films, newsreel footage, books, magazines, and assorted archival documents, the exhibition will fill more than 2,000 square meters of the East Wing of Haus der Kunst, offering an absorbing exploration of one of the twentieth century's most contentious historical eras.

Rise and Fall of Apartheid highlights the different strategies adopted by photographers and artists; from social documentary to reportage, photo essays to artistic appropriation of press and archival material. Through these polysemic images, the exhibition embarks on a tour of how photographers and artists think with pictures, the questions their images pose, and the issues of social justice, resistance, civil rights and the actions of opposition to apartheid they raise. In so doing, Rise and Fall of Apartheid brings together numerous iconic photographs that have rarely been shown before, to propose a fresh historical overview of the photographic and artistic responses to apartheid.

A fundamental argument of the exhibition is that the rise of the Afrikaner National Party to political power and its introduction of apartheid as the legal foundation of governance in 1948 changed not only the country's political landscape, but also transformed the pictorial perception from a "relatively benign colonial space based on racial segregation to a highly contested space in which the majority of the population struggled for equality, democratic representation, and civil rights" (Okwui Enwezor).

From the moment apartheid was introduced, photographers in South Africa were immediately aware of how these changes taking place in politics and society accordingly affected photography's visual language. Consequently, the medium shifted decisively from the anthropological protocol of "Native Studies" into the social instrument of documentary form. The resulting photographs not only enrich the understanding of the events of apartheid but also the knowledge of photographic practice in South Africa.

Resisting the easy dichotomy of victims and oppressors, the photographers' complex images present the reading of an evolving dynamic of repression and resistance. Included in the exhibition are seminal works by Leon Levson, Eli Weinberg, David Goldblatt and members of Drum magazine, such as Peter Magubane, Jurgen Schadeberg, Alf Kumalo, Bob Gosani, G.R. Naidoo, and others in the 1950s.

Also represented are the investigative street photography of Ernest Cole and George Hallett in the 1960s, the reportage of Sam Nzima, Noel Watson, and protest images of the Black Consciousness movement, the student marches in the 1970s, the work of the Afrapix Collective in the 1980s, as well as reportages by the members of the so-called Bang Bang Club in the 1990s. The exhibition concludes with works by a younger generation of South African photographers, such as Sabelo Mlangeni and Thabiso Sekgale, and the collective Center for Historical Reenactments, whose projects offer subtle reappraisals of the aftereffects of apartheid still felt today.

The exhibition is curated by Okwui Enwezor, Director, Haus der Kunst, with Rory Bester, Wits School of Arts, Johannesburg. Rise and Fall of Apartheid: Photography and the Bureaucracy of Everyday Life is organized by the International Center of Photography, New York in collaboration with Haus der Kunst. It was on view at ICP from September 14, 2012, until January 6, 2013.