There Is No Utopia. Behind the phrase that lends this exhibition its title there are two thinkers: Jean Baudrillard and Andreas Huyssen. The show, organized into two asymmetrical sections, includes work by twenty-two international artists in photography, video, drawing, painting, collage and more. 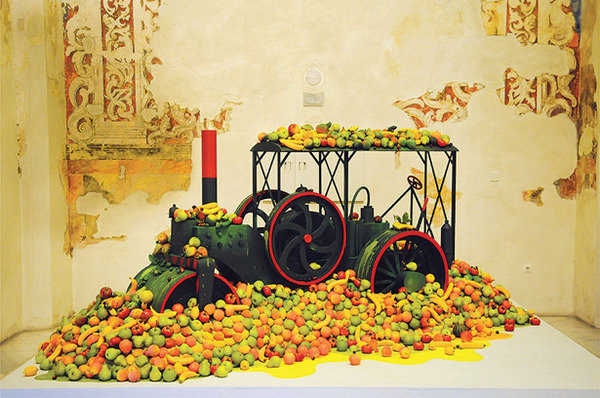 Behind the phrase that lends this exhibition its title there are two thinkers: Jean Baudrillard and Andreas Huyssen. The former defined simulation as the creation of something that "has no relationship to any reality whatsoever," and therefore predicted the replacement of "the real" by "the virtual." Huyssen picks up where Baudrillard left off, positing that, since reality has been lost and replaced by its simulacrum, utopia cannot exist. Hence the title, "if there is no reality, there can be no utopia." In other words, in the age of simulacra and virtual reality, the disappearance of the real also entails the end of the utopian.

In the age of information, actual reality has been supplanted by virtual reality, computer simulation and false narratives. Since the concept of utopia is based on the improvement of reality, the disappearance of the real also signals the end of utopia. Without Reality There Is No Utopia illustrates this premise by examining false narratives that masquerade as truth; the collapse of Communism in the 1980s; the recent financial crisis, which heralds the demise of capitalism; the contradictions inherent in geopolitics; and the explosion of democratic uprisings that rebounded around the world. The exhibition, organized into two asymmetrical sections, includes work by twenty-two international artists in photography, video, drawing, painting, collage and more.

The first is The Description of the Lie, a skeptical introduction to the systems, which fabricate the simulacra of the real. In this section, the artists focus on how truth has been replaced by media-constructed false narratives. Judi Werthein's work portrays life in a settlement in a region of Chile peopled entirely by Germans exiled from their country after World War II; and Dora García fictionalizes the paranoid state of surveillance generated by the Stasi in the former East Germany. Other artists in this section are Rirkrit Tiravanija and Lene Berg.

The second section bears the title Collapses and is divided into four sub-sections: communism, capitalism, geopolitics and democracy. As Huyssen aptly put it, "Utopia never dies alone. It takes its counter-utopia down with it." Therefore, when communism falls it takes capitalism down, and as capitalism collapses it drags democracy along with it, since the latter decided to cast its lot in with the former. At the same time, the expansive system that characterizes capitalism also implies its geopolitical implosion. It therefore seems that we should seriously consider the demise of utopia as the great problem of our time.

Artists in The Collapse of Communism examine the conditions leading up to, and the aftermath of, the fall of Communism. The Russian collective Chto Delat? (What is To Be Done?) encourages the viewer to critically engage with the events that lead to the demise of the Soviet system; paintings by Manolo Quejido were inspired by a trip to Cuba, where he asks, "What can we do right now with our desire for revolution?" and Ciprian Mureşan considers the paradoxes of history and memory from a post-Communist perspective.

The Collapse of Capitalism focuses on the effects of the 2008 world financial crisis, with the premise that this was the inevitable result of a system based on consumerism, waste and the depletion of the planet's resources. SUPERFLEX Collective's humorous parody The Financial Crisis ironically suggests that the crisis is an illness that can be cured through hypnosis; and El Roto's cartoons, which mix irony, dark humor and sarcasm, create a stark portrait of the current situation in Spain. Other artists in this section are Daniel García Andujar, Jan Peter Hammer and Katya Sander.

The artists in The Geopolitical section examine the influences of colonialism and the West on recent geopolitical uprisings. Through a collection of posters, Zeina Maasri documents the civil war in Lebanon between 1975 and 1990; and in his drawings Fernando Bryce depicts colonial practices and their "civilizing" discourses. Other artists in this section are Ignasi Aballí, Zhou Xiaohu and Federico Guzmán.

Without Reality There Is No Utopia is organized by the Centro Andaluz de Arte Conteporaneo in Seville, Spain, where it was originally presented in 2011. Curators are Alicia Murría, Mariano Navarro and Juan Antonio Álvarez Reyes.