Nutsy's is a self-contained environment with elements built in both 1:1 and 1:25 scale. 1:1 scale elements allow operator and visitor interaction and activation with the works, while models built in 1:25 scale accommodate 1:25 scale radio-controlled Mini-Z race cars, manufactured by Kyosho Electronics. 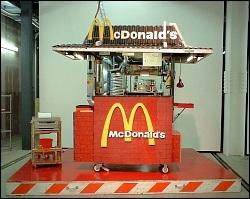 Nutsy's is a self-contained environment with elements built in both 1:1 and 1:25 scale. 1:1 scale elements allow operator and visitor interaction and activation with the works, while models built in 1:25 scale accommodate 1:25 scale radio-controlled Mini-Z race cars, manufactured by Kyosho Electronics. Day-to-day Nutsy's maintenance and operation falls under the auspices of at least one Nutsy's official. He official maintains Nutsy's collection of Mini-Zs, provides security, troubleshoots any electronic problems, plays music, administers driving tests, and issues licenses for spectators who wish to drive the raceway with a car from Nutsy's collection.
Nutsy's Cup, a race open to anyone who owns a Mini-Z racer, requires a full staff for proper operation. Two Nutsy's McDonald's workers; a racemaster who runs and times races; a selector to play music; a mechanic to fix broken cars; and at least four race marshals run the racing event. Nutsy's Cup champions have their name engraved on Nutsy's cup and maintain possession of the cup as long as they can defend the title.


Curatorial Statement
The allegorical movements of Modernism and contemporary culture coexist in Nutsy's world, as artist Tom Sachs teases out their tensions in a gaming environment born of today's hyper-real entertainment culture. Sachs has turned the installation site into a hand-crafted video game, bringing his studio's electronic gaming inspiration into the space of the physical site. Each scenario of Nutsy's world takes us into a story, a neighborhood of oppositions, which must be negotiated in order to successfully complete a game-winning mission. Thus Nutsy's is a site about circulation and competition, negotiating the past and present through a twenty-first century consumer culture's search and destroy mission.

Nutsy's is an oscillating set of imagined realities, as it negotiates European and American, capitalist and socialist, modern and postmodern, utopian and dystopian myths and realities. The stations that lie on the map of Nutsy's-among them, scale model foamcore sculptures of Le Corbusier's architectural sites Unit� d'Habitation and Villa Savoye; a McDonald's station; a DJ/Selector booth; a modernist art park; and an inner-city ghetto-- recall the shattered memory of modernism's hopes and failures; the economy's booms and busts. The International Style lends itself to Universal Corporate Style, and for all of the high aspirations and achievements of modernism, Nutsy's shows us its weakness in the face of corporate take over: Le Corbusier becomes McBusier-an amalgam of a drive-thru McDonald's design and Le Corbusier's carport design in the Villa Savoye.

In his postmodern bricolage, Sachs interrogates fundamental issues of modernity: production, consumption, circulation. Nutsy's, with all of its architectural and historical quotation, is nonetheless of its time, rife with product placement, depicting our contemporary landscape in the language of action movies-themselves now reduced to an advanced advertisement to buy the electronic game version of the film. Movies have shaped our world, given us the master texts through which are given cues as to register and react to what happens in real life. The product placement of iconic architecture within Nutsy's is obvious; what's less immediate is how seemingly disparate aspects of the city and urban life are rendered product as well.


Alongside its depiction of the powers of mass commercialization, notions of resistance and transgression surface throughout Nutsy's, with its stolen barriers a structural leitmotif, its unlicensed McDonalds franchise, and self-styled Barcelona chairs. Like the counterfeit Vuitton, Prada, and Gucci bags which are not-so-surreptitiously sold on street corners throughout major cities around the world, Nutsy's embraces the creation of an alternate economy, if still predicated on mass consumerism's obsession with status branding. Yet the self-made McDonald's of Nutsy's is perhaps not so dissimilar in spirit to self-made tycoon Ray Kroc's single drive-in restaurant origins, and the skilled handcrafting of Nutsy's "necessary objects" are equally a testament to the spirit of invention undeterred by notions of legality predicated on big business interests.

Nutsy's invites us to rethink borders--whether economically or geographically, architecturally or ideologically constructed--to see the sociopolitical structures that define, fence in, demarcate, and encourage us to activate and open up the built environment to reversals of meanings.

Nutsy's will be specially activated by Tom Sachs and his studio crew during Nutsy's Cup, a racing event with professional racers, music, and even food from Nutsy's McDonald's. Visitor participation is encouraged.