The Sculptures of Sopheap Pich. The exhibition includes Buddha 2, an openwork construction of a Buddha torso, the lower half of which is unconstructed, allowing loose strands of rattan to hang freely. This work resonates strongly with Cambodia's recent past: Cambodia is a deeply committed Theravada Buddhist society. 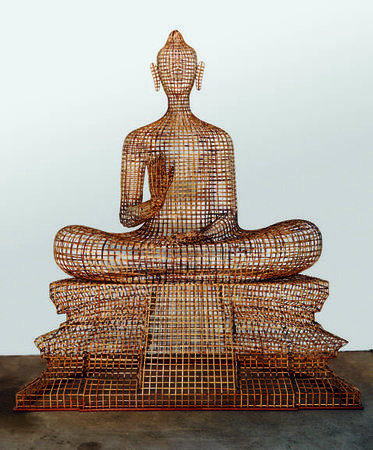 The Metropolitan Museum of Art will present ten works by the contemporary Cambodian artist Sopheap Pich (b. 1971), beginning February 23. Drawn from U.S. public and private collections, Cambodian Rattan: The Sculptures of Sopheap Pich is part of the Museum’s contribution to the New York-wide Season of Cambodia, to be held in April-May 2013.

The exhibition, which will be installed in three spaces in the Asian galleries, includes Buddha 2 (2009), an openwork construction of a Buddha torso, the lower half of which is unconstructed, allowing loose strands of rattan to hang freely. This work resonates strongly with Cambodia’s recent past: Cambodia is a deeply committed Theravada Buddhist society, whose faith was seriously challenged during the Khmer Rouge period, 1975-79. During these painful years, Buddhism was desecrated and officially discarded, allowing for an unraveling of Khmer society, a moment evoked in this work.

Also on view will be the artist’s recent work Morning Glory (2011), a spectacular large-scale construction with embedded memories of a time when much of the population was reduced to cooking the plant as a source of nourishment. A third work, Ratanakiri Valley Drip (2012), has more formal concerns, a lyrical study of horizon, vista, landscape, and earth, evoking the contemporary landscape of Cambodia.

Sopheap Pich lives and works in Phnom Penh, Cambodia. Born in 1971 in the western province of Battambang, he and his rice-farming parents were displaced during the Khmer Rouge period, to refugee camps along the Thai border. In 1984 they migrated to America where Pich subsequently trained at the Art Institute of Chicago School of Art, graduating in painting in 1999. In 2002 he returned to live in Cambodia, to re-engage with his country, its language and landscape.

Since his return, he works principally in rattan and bamboo, constructing organic open-weave forms that are solid and ethereal, representational and abstract. Much of his work is inspired by elements of the human anatomy or plant life. Rattan and bamboo are natural materials integral to everyday life in rural Southeast Asia. The manner in which Sopheap employs them—splitting them into long ribbons that are then interlaced and secured with tight twists of wire—allows them to define the forms of his sculptures, combining his training as a painter with the spatial conceptualization of a sculptor.

Sopheap literally draws in space with these materials, creating three-dimensional objects which are largely defined by their graphic character. Both in medium and form, Sopheap’s art consciously embodies the artist’s memories of culture and place, informing his images in complex ways that imply deeper levels of meaning.

In conjunction with the exhibition, the Museum will offer a variety of education programs including a Sunday at the Met on April 14, exhibition tours, and a How Did They Do That? program with accompanying musical performances on Saturday and Sunday, April 13 and 14.

Cambodian Rattan is organized by John Guy, Florence and Herbert Irving Curator of the Arts of South and Southeast Asia, in conversation with Sheena Wagstaff, Chairman, Department of Modern and Contemporary Art, both at The Metropolitan Museum of Art.

The exhibition and related programs are made possible by Cynthia Hazen Polsky and Leon B. Polsky.

The exhibition and programs are presented as part of the New York-wide Season of Cambodia, to be held April – May 2013.