The Sixties. The modular, geometric objects designed by Burga in the second half of the 1960s conform to the definition of a system elaborated by the Argentine critic Jorge Glusberg, co-founder of CAYC. 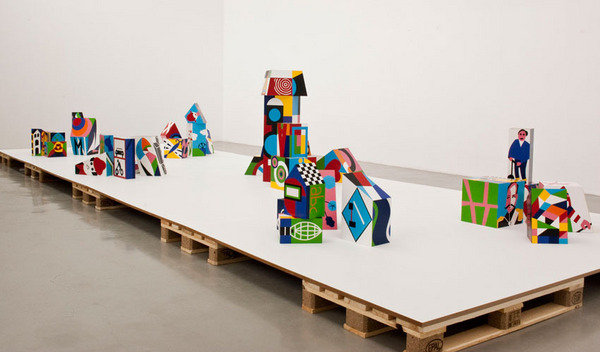 After completing her art studies at the Catholic University of Peru in Lima (1962–1964), Burga turned to experimental forms of art. She joined the group Arte Nuevo (New Art) during 1966–1967, who paved the way for a radical redefinition of the artistic landscape in Peru. While at the School of the Art Institute of Chicago on a Fulbright Scholarship (1968–1970), she concerned herself with ephemeral conceptual approaches and, after returning home, became one of the early representatives of installation art in Peru. In the nineteenseventies, complex analytical works followed, which explored the nature and modus operandi of language and various forms of information. Teresa Burga’s experiments in the areas of pop art, visual poetry, conceptual art, information art, and audio-visual art revolve around questions of representation and mass culture. They explore the constructions of femininity as well as the processes of mechanization and bureaucratization of labor and everyday life. They comprise conceptions of absurd, dysfunctional apparatuses and toys, extensive instructions and diagrams for unrealized projects, musical scores, experiments like the timed or blindfolded production of drawings, and the multimedia visualizations of interdisciplinary research projects.

The modular, geometric objects designed by Burga in the second half of the 1960s conform to the definition of a system elaborated by the Argentine critic Jorge Glusberg, co-founder of CAYC (Centro de Arte y Comunicación / Center of Art and Communication) in Buenos Aires. The system is a grouping of entities which organize and articulate themselves in relation to one another in a dynamic process and that cannot be understood either individually or outside of the framework of the mutual interdependence. In Burga's three-dimensional works the multiplicity of possibilities is enacted by particular arrangement of visual motifs, forms, and colors, which allow to reconfigure the pieces in a variety of ways.

In 1968 Teresa Burga designed a series of 52 prisms that were oganized in 7 groups of shapes. Over three hundred motives depict an iconography which is rooted in a Peruvian pop of the time. The prisms were reconstructed by the artists herself and re-built for the gallery show.