The group exhibition brings together a selection of international contemporary photographers, who push the boundaries of portraiture through a variety of techniques. 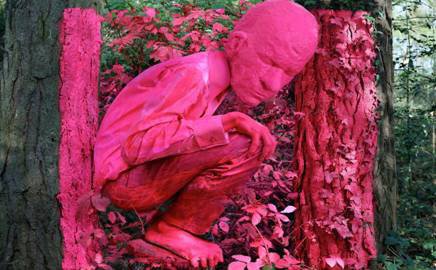 High House Gallery is a new Oxfordshire gallery dedicated to promoting the best in contemporary art. Situated within a grade II listed Victorian mansion and recently-restored formal gardens located in the Oxfordshire village of Clanfield, the gallery promotes only the best in critically-engaged contemporary art. The innovative exhibition programme features both solo shows and curated group exhibitions from an international roster of gallery and invited artists.

The next exhibition to be held at High House Gallery is Masquerade, a group exhibition bringing together a selection of innovative and award-winning international contemporary photographers, who push the boundaries of portraiture through a variety of techniques. Both established and emerging, these artists share a fascination with depicting the human face and body, but their works lie far outside the realms of conventional portraiture.

The subjects within the show are distorted and manipulated. The images have been cut, layered, collaged, painted or stitched over, prompting the viewer to question the perception of reality. Some of the portraits have been enhanced, or entirely faked; faces may be out of focus, overexposed, turned away or blocked from sight. For many of these artists their images are part of a more extensive conceptual whole, alluding to other meanings, questioning accepted ideas or referring to social, cultural or internal worlds.

Portraits have traditionally served a documentary purpose. The camera has acted as a window to the world, representing a personal, historical, ethnographic or cultural truth. The reality however is far more complex: rather than being a purely factual medium, artists often use the camera to disguise the truth depending upon their artistic agenda.

In Natural Inside, Jonny Briggs, winner of the 2011 Channel 4 / Saatchi New Sensations prize, represents himself painted pink and wearing a latex mask of his enlarged father’s head with a negative cast of his own head inside. Briggs typically uses these constructed sets to photograph his disguised self and family members, resulting in intensely personal work which questions the boundaries between adult and child, love and resentment, the real and the fake.

American photographer Ryan McGinley, in 2003 the youngest artist to have a solo show at The Whitney Museum of American Art, characteristically works with nudes, as reflected in Sisters Moonshine. This intriguing shot depicts three naked girls, mysteriously staring towards the moon with their backs to the viewer.

Julie Cockburn also challenges the means by which images are seen and visually digested. She playfully manipulates found photographs of portraits with her own childlike embroidered geometric patterns, generating a dialogue about ownership, modernity and art history. Alison Jackson, renowned worldwide for the manipulation of celebrities in her images, explores the cult of celebrity in Mick Jagger Ironing and the Queen at Tesco’s. These convincingly realistic portraits raise questions about whether we can believe what we see in the media.

John Stezaker, winner of the prestigious Deutsche Borse Photography Prize in 2012, appropriates original images taken from movie stills and vintage postcards, wittily adapting their original content and context to create new meanings. In Untitled (2012) the top right quarter of the photograph has been randomly sliced away, so we are left to piece together the sitter’s identity ourselves.

Other manipulated works in the exhibition include photographs by Korean artist Minhong Pyo, who examines the interface between the real and imaginary and Matt Lipps, who re-organises visual icons from our cultural history into his own composition. Portuguese artist Virgilio Ferreira experiments with focus and tonal contrasts to represent the intangible human states of being, using blur to play with perception and sight, whilst Anne Collier works with images from the mass media that surrounds us, often using stereotyped images of women to make us aware of the sexual politics of image-making.

There will be approximately 15 portraits in the exhibition. The next exhibition will be a solo show by Gabrielle Boyd from 21st March – 7th April 2013.