The end of days. The show looks at current perceptions of disaster through a dialogue between artists from a variety of cultural and social backgrounds, working in media from painting to photography, video and installation. Relating to the title of the exhibition "Wittgensteinian Grammar of Physical Education", Wurm presents a number of sculptures and videos. 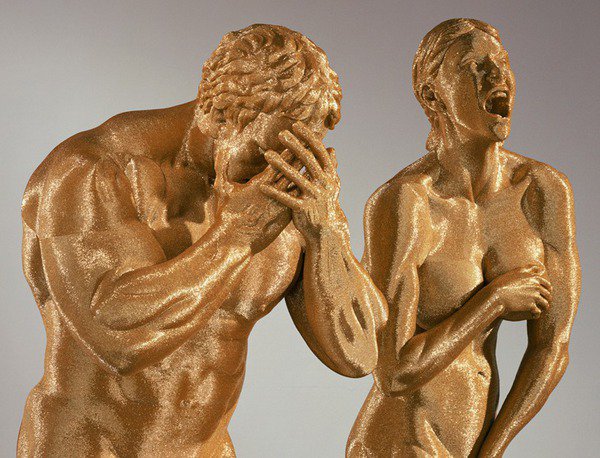 Galerie Thaddaeus Ropac is delighted to announce the opening of the group show Disaster-The End of Days at its new space in Pantin.

The word disaster comes from “disastro” (dis- and astrum, “bad star” or “star out of position,” thought to cause harm). It expresses the notion of catastrophe, decline and destruction, a wholly negative event.

The theme of disaster has a rich iconography and set of interpretations, and continues to fascinate contemporary artists. This exhibition looks at current perceptions of disaster through a dialogue between artists from a variety of cultural and social backgrounds, working in media from painting to photography, video and installation.

Among the first representations of disaster we find religious scenes such as the expulsion of Adam and Eve from paradise and the betrayal of Christ by Judas. It became a generic term in biblical iconography. Artists Zhang Huan and Liza Lou found inspiration in these biblical episodes, of which they offer a highly personal and original interpretation.

Disaster is also present in scenes from Greek mythology, which continue to inspire artists. With his installation of letters lying on the floor and spelling the name “Icarus,” Jack Pierson offers a metaphorical, textual reference to the fall of Icarus. Robert Longoʼs bronze sculpture revisits the fantastic animal that is the chimera, fusing historical and Pop elements.

The theme also embraces political and historical questions. This aspect of disaster is evident in portraits of dictators, such as Yan Pei-Mingʼs painting of Gaddafiʼs corpse, and works by Georg Baselitz and Anselm Kiefer revisiting 20th-century tragedies in Germany and Europe, and asking how we are to deal with their heritage.

Other artists have a more individual perception of disaster. The work of Amos Gitai relates his personal experience of war. Here, the filmmaker becomes a photographer, offering us original images of wars that oscillate between recollections and memory work.

The portrait genre explores a more individual vision of calamity, psychological destruction and human disaster. With Barry X Ball, for example, the mutilations of the soul are the result of personal degeneration.

For Gilbert & George disaster takes on a social dimension, with evocations of vandalism, crime and the omnipresence of violence in our society. With Marc Brandenburg, the work points up human fragility and solitude.

The illustration of disaster may also draw on news events, whether historical or recent, as in the work of Philippe Bradshaw, who relates the episode of the Raft of the Medusa, referring not only to Gericaultʼs painting but also to the actual wreck in 1816. More recent, Nate Lowman juxtaposes a flood in Brazil with that of a fire in Scotland.

Some artistsʼ take the idea of disaster to its logical conclusion by destroying the work itself, or having it self-destruct, as in the installation of mirrors by Banks Violette, which is put under pressure by a hydraulic system until it shatters and collapses in the course of the exhibition.

Galerie Thaddaeus Ropac in Pantin is pleased to present a new body of work by Austrian artist Erwin Wurm in its performance space. The central part of the exhibition will be a physical performance on and around new clay models of an architectural complex taking place on Sunday, March 3rd relating to the title of the exhibition, Wittgensteinian Grammar of Physical Education. A number of cast house sculptures will be on display as well as videos showing how they were made.

Modelled on existing buildings of European and American architecture the artist punched or kicked the houses, hit them with his elbows or crushed them with his own body weight by lying or sitting on them. The marks of destruction are preserved through being cast in bronze, acrylic or even polyester, and refined by silver- or gold-plating.

Some of the buildings chosen by the artist are well known, others anonymous and some selected for personal reasons. The maltreated models include prisons, warehouses, a psychiatric clinic, bunkers, as well as the house belonging to his ex-wife. The Narrenturm [madhouse tower] in Vienna bears footprints, San Quentin State Prison has been slashed open, and Alcatraz has a hole, dug out by hand, which might just as well have been made by a violent explosion.

The house, a symbol of withdrawal, but also of sociability and living together, is here defined purely from the exterior, an object. This purely formal conception is in turn counteracted by the sensual components of the production and immediate destruction. There is something playful yet controlled in this process of creation and destruction and the preservation of ruined forms.

The deformation gives the works the amorphous character that has made Wurm’s style iconic and the often-alluring gold or silver or gloss-varnished surfaces trivialise and conceal the course of the purposeful attacks, and glorify the joyful destruction.

Galerie Thaddaeus Ropac has published a book, Erwin Wurm, Samurai & Zorro, with a text by Abraham Orden in 2012 on this series of works.

Erwin Wurm was born in Bruck an der Mur, Austria, in 1954; he lives and works in Vienna and Limberg. He became known in the early 1990s for his One-Minute-Sculptures, for which his models posed in relation to everyday objects, holding their position for a minute and thus becoming, however briefly, sculptures.

Recent institutional solo exhibitions of Wurm’s work include the Dallas Contemporary in Texas, as well as the CAC Málaga, Spain, the Vitra Museum in Weil am Rhein, Germany and the Albertina Museum in Vienna.

He will have a solo exhibition at the MOCAK in Krakau, Poland, opening in October 2013. In 2014, solo exhibitions at the ZKM Karlsruhe and the Städelmuseum in Frankfurt am Main, Germany are scheduled.