"I came here on my own. & Salzburggrubzlas, Grubzlassalzburg!" Performances by robbinschilds. The artist questions gender and national identity's relationship to the existential quest, using ritual and repetition to enrich our understanding of who, and what, we are. Christopher Duffy's New Commission, I Think I Want My Energy in All Colors, is a series of new glass sculptures presented together as a dynamic installation. Jong Oh's Position, Reposition is a new site-specific installation and is the first exhibition in Art in General's newly renovated Musee Miniscule. 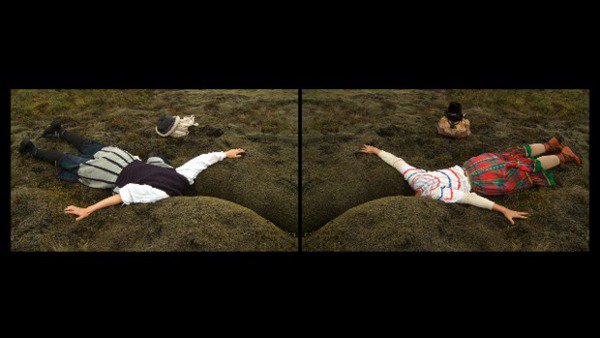 Part 1: I came here on my own., loops a seemingly endless quest beyond place, time, and logic. Began on residency in Christchurch, New Zealand, upon which robbinschilds encountered the country’s iconic ‘Man Alone’ trope, their video rewrites and subverts the classic male journey myth through two women undertaking mirrored but separate journeys. Presented as a four-channel installation, the video’s loop perpetuates a seemingly endless quest for something greater. The journey is left intentionally open, at once evoking legend, myth, and fable while simultaneously re-contextualizing the archetypal concepts of man in nature, lone traveler and conquering hero. Distinct geographical locations and larger than life imagery frame an extraordinary journey beyond place, time, and logic. robbinschilds’ questions gender and national identity’s relationship to the existential quest, using ritual and repetition to enrich our understanding of who, and what, we are.

Part 2: Salzburggrubzlas, Grubzlassalzburg!, a live performance series, conceived as a reflexive foil to robbinschilds’ four-channel video installation, was created on-site during the first two months of the exhibition. The live iteration of their commission takes into examination robbinschilds’ separate but intertwined identities as longtime collaborators. Running for approximately 60 minutes, the performance work ravels a meta-journey through the artists’ own non-linear creative process utilizing a layering of text, projection and choreography. Joined by performers Aretha Aoki and Vanessa Anspaugh with an original sound score by A.V. Linton and lighting design by Megan Byrne.

There are limited seats available for each of the performances. To purchase tickets, click on the performance date above or visit the main events page HERE. For this performance series, Art in General will have a NO LATE SEATING policy. Out of respect for the artists and audience members, and due to the nature of the performance, latecomers will not be allowed in. The running time of the performance is approximately 60 minutes with no intermission. No entry/exit once house doors close.

Christopher Duffy
I Think I Want My Energy in All Colors

Christopher Duffy’s New Commission, I Think I Want My Energy in All Colors, is a series of new glass sculptures presented together as a dynamic installation.

Suspended from the ceiling of the storefront Project Space, a mechanized series of glass vessels turn on an axis, shimmering and reflecting against the windows. A collection of tubes, acting as a sculptural circulatory system, pass air through glass vessels encased in brightly colored balloons. Expanding and contracting, these inorganic organisms breathe, giving the installation its own heartbeat and pulse. In another corner of the space, a glass rainbow explodes from the base of a bronze tree trunk, reaching for the sun. A faint soundtrack penetrates the space, a constant loop that mirrors the kinetic movement of the installation.

Sublime, wondrous and playful, I Think I Want My Energy in All Colors links internal and external systems of connectivity. The work’s confounding transparency, highlighted by Duffy’s use of craft, abstraction, and everyday materials, plays with the concept that looking and being looked at are vital forms of interaction.

Christopher Duffy (b. 1980) is an American artist living and working in Brooklyn, NY. Duffy received his BFA in glass from The Cleveland Institute of Art, Cleveland, OH (2003). He has worked with or fabricated glasswork for many artists including Brent Young, Josiah McElheny, Michiko Sakano, Jorge Pardo, and Thaddeus Wolfe. He was the assistant art director on the short lived cult classic IFC television show FoodParty for its second season, and has also worked with the musician GirlTalk for several years on live visual elements. He was instrumental in the formation of the now defunct no profit experimental Brooklyn performance space Paris London West Nile. This marks the second solo presentation of Duffy’s work in New York City, his first solo exhibition was in 2008 at Live With Animals Gallery, Brooklyn, NY.

Jong Oh’s Position, Reposition is a new site-specific installation and is the first exhibition in Art in General’s newly renovated Musée Miniscule.

Oh’s interventions utilize relatable materials, twine, chair legs, weights, brass knobs – not manipulated beyond their found state — in ways that complicate our relationship to everyday objects. Performing a ‘call and response’ with the existing architecture of the Musée Miniscule, Oh’s installation evokes and plays with the reductive formalism of Minimalist sculpture. Comprised of wood, metal pipe, Plexiglass, sheetrock, graphite, and string, Position, Reposition is both larger than the space in which it is housed and seemingly invisible. Relying on gravity and resistance as its only means of support. Oh’s skeletal intervention renders its own volume into a physical sketch.

Image: robbinschilds. I came here on my own. 2012, Video still. All images courtesy the artist.

Opening reception on Saturday September 22nd, from 6 to 8 pm