Slavs and Tatars and Cevdet Erek

The solo exhibition of Slavs and Tatars borrows its title from their new series of mimeograph prints, 'Behind Reason' (2012) questioning contemporary gaps between different epistemological realities and ontologies in West and East. Cevdet Erek`s conceptual focus is the axis between the perception of space, cognition of hearing and listening as well as beating out the rhythm of the space. These two solo shows are the final episode of 'Artistic Dialogues'. 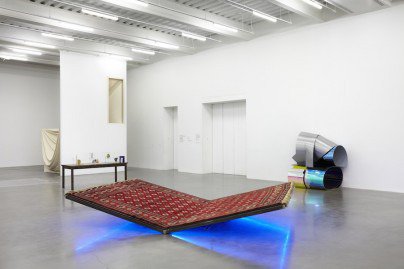 Since Spring 2011, Künstlerhaus Stuttgart has been developing a series of solo exhibitions entitled, Artistic Dialogues, aiming to investigate methodological aspects of exhibition making. These solo exhibitions have been planned and programmed with different correlations and strategies regarding their conceptual, contextual, logistical, material, time-related, spatial and architectural concerns.

The solo projects have been based on a comprehensive study of the invited artists’ practices with a contextually sensitive and critical approach. Establishing different relationships with the institution, audience and city, the solo projects have become field surveys, through which one can clearly observe the function, role and potentiality of exhibitions. To summarize, Artistic Dialogues has operated as a critical platform for an institutional program, which is concerned with linking itself to the research and development process within the artists’ studios. A nonprofit art institution founded by Stuttgart-based artists as an experimental space with workshops and studios, Künstlerhaus Stuttgart proposes these solo exhibitions as production units rather than pedagogical presentations.

SLAVS AND TATARS – Behind Reason

The solo exhibition from the artist collective Slavs and Tatars borrows its title from their new series of mimeograph prints, “Behind Reason” (2012) questioning contemporary gaps between different epistemological realities and ontologies in West and East. From transliteration to syncretism, recent works from Slavs and Tatars are selected to investigate the relationships between our perception and cognition, in particular language’s ability to decode the links between text-based imagination and the contemporary image world. Conceptually speaking, “Behind Reason” intends to deal with the act of reading as equally affective, architectural, and analytical.

At the core of their presentation, the installation “PrayWay” (2012) is centered as a hybrid form between the rahlé, a book stand traditionally used for holy books, and the takht, river-bed, vernacular seating areas used in tea-salons. The piece is borrowed from Munich-based collector, Angela Staffa; after this exhibition terminates, “PrayWay” will remain, for the next two years, as the meeting point for the events, performances, and discussions on the second floor. The artist collective will also present two new works: Kitab Kebab (KHS), a site-specific skewer of books and an edition of Samizabt, a sound piece which looks to poetry as a tool of resistance via a linguistic and political translation.

SLAVS AND TATARS
Slavs and Tatars is a faction of polemics and intimacies devoted to an area east of the former Berlin Wall and west of the Great Wall of China known as Eurasia. The collective’s work spans several media, disciplines, and a broad spectrum of cultural registers (high and low) focusing on an oft-forgotten sphere of influence between Slavs, Caucasians and Central Asians. Slavs and Tatars has published Kidnapping Mountains (Book Works, 2009), Love Me, Love Me Not: Changed Names (onestar press, 2010), Not Moscow Not Mecca (Revolver/Secession, 2012), Khhhhhhh (Mousse/Moravia Gallery, 2012) as well as their translation of the legendary Azeri satire Molla Nasreddin: the magazine that would’ve, could’ve, should’ve (JRP-Ringier, 2011). Their work has been exhibited at the Tate Modern, the 10th Sharjah, 8th Mercosul, 3rd Thessaloniki, and 9th Gwangju Biennials. After devoting the past 5 years primarily to two cycles of work, namely, a celebration of complexity in the Caucasus (Kidnapping Mountains, Molla Nasreddin, Hymns of No Resistance) and the unlikely heritage between Poland and Iran (Friendship of Nations: Polish Shi’ite Showbiz, 79.89.09), Slavs and Tatars’ third cycle, The Faculty of Substitution, on mystical protest and the revolutionary role of the sacred and syncretic, has contributed to group exhibitions at the GfZK, Leipzig and the New Museum Triennial as well as solo engagements at Vienna’s Secession (Not Moscow Not Mecca), MoMA, NY (Beyonsense), and Moravia Gallery, Brno (Khhhhhhh). Their Friendship of Nations: Polish Shi’ite Showbiz is currently on view at Los Angeles’ REDCAT thru March 24th, 2013 before moving to Vancouver’s Presentation House from April 12th to May 26th, 2013.

Cevdet Erek`s conceptual focus is the axis between the perception of space, cognition of hearing and listening as well as beating out the rhythm of the space. Use of sound and dialogue with architecture are the most important elements in his practice; and through musical thinking and taking rhythm as an allegory, he creates differently scaled installations. Erek considers this exhibition as a test-drive to examine the cognitive patterns he deals with in the selected works. The artist proposes “anti pattern” as a key term– borrowed from the context of engineering–as the ineffective problem solving during the production process of any work. Through this exhibition, the artist continues his research process with sound-based installations departing from the physical coordinates of the exhibition space (which in Künstlerhaus’ case is an old suitcase factory). At the center of his floor plan, a sound-based installation with a form of sculptural gesture stands reminding us of his recent solo show “Week” at Kunsthalle Basel and his contribution, “Room of Rhythms” to dOCUMENTA (13) in Kassel. Erek will also display a selection from his series, “Rulers and Rhythm Studies” (2007 – 2011), which challenges the perception and representation of time as an abstraction of collective or personal memory. In order to investigate his conceptual approach and abstraction technique, the exhibition will also include a selection of his drawings, objects, graphic work and collages.

The artist will also present a site-specific installation, which departs from the current condition of the fourth floor of Künstlerhaus including some architectural elements from the earlier installations of Artistic Dialogues such as painted walls, light solutions etc. In addition this gesture, he associates his perception of color with the cultural codes, which transform the visual perceptual property from “ready-made” tones into objects of desire, fetish and obsession.

Opening on Friday, March 8, 2013, the last episode of Artistic Dialogues invites the Künstlerhaus Stuttgart audience to an artistic experience, which questions how words, letters, notes, rhythms and elements of language function to abstract forms of political conscious and meta-cognition in time and space. Just as spring awakens the physical body of living organisms, nature and the human spirit, the attempt to bring these two practices together intends to trigger twin questions we all share: Do we only hear our own voice when we read, write or think as linguistic acts of cognition? Or, does every letter, voice or idea belong to the universe?

Cevdet Erek, Room of Rhythms, 2010-2012, mixed-media installation, commissioned and produced by Documenta 13 with support of SAHA, Istanbul, and the assistance of MIAM, Istanbul Technical University. Photo by Nils Klinger. Courtesy the artist.

CEVDET EREK
An artist and musician with background of architecture, Cevdet Erek (born in İstanbul; lives and works in İstanbul) composes and re-composes works that capture and reformulate spaces and situations. His works, which take the form of installations and performance, employ sounds, beats, borrowed and constructed architectural elements, graphic illustrations as well as ready made forms. Cevdet Erek participated in dOCUMENTA(13) with his Room of Rhythms; the Istanbul Biennial (2011, 2003) and the 7th Asia Pacific Triennial (2012). He has exhibited at venues including MAK, Vienna (2012), Tate Modern, London (2011), Arter, İstanbul (2010); Stedelijk Museum, Amsterdam (2006), among others. A solo exhibition of his work titled Week was show by Kunsthalle Basel, Switzerland in 2012. Cevdet Erek was awarded the Nam Jun Paik Prize (2012) and the Uriot Prize with Studio (2005), during his residency at Rijksakademie vbk (2005-2006, Amsterdam). The artist book SSS – Shore Scene Soundtrack was published by BAS in Istanbul in 2008 and most recently, Room of Rhythms 1, was published by Walther König on the occasion of dOCUMENTA (13) in 2012. Erek works as an instructor at ITU TM Conservatory and Architecture Faculty. He often collaborates with architects, directors, choreographers, authors and he is also co-founder of Nekropsi.